Only a few days ago, YFI price managed to overtake Bitcoin after peaking above $12,800, however, the bull run is clearly far from over. YFI is now trading at $15,511 but has hit $17,000 on some exchanges today. The trading volume continues increasing significantly and there seems to be basically 0 selling pressure as of now.

The daily chart is clearly extremely bullish but we can’t really use it as it is still an extremely new coin and most of its trading life has been to the upside. 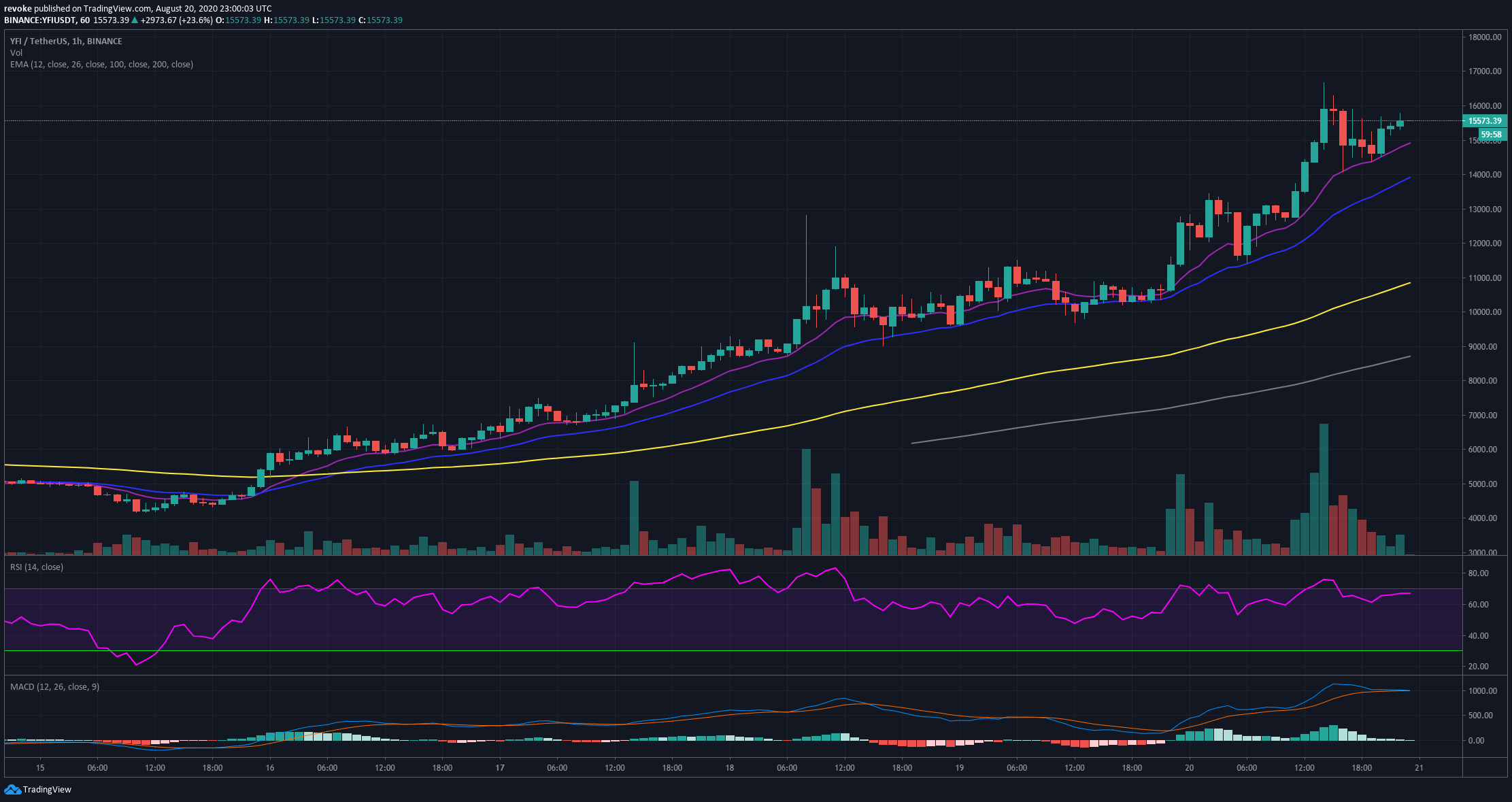 The hourly chart on the other hand, it’s far more useful and shows a massive bull rally but not an unhealthy one. Bulls have been able to set clear levels of support on the way up and they have been riding the 12-EMA for almost the entire time.

YFI price is now aiming to hit $20,000 and it could easily do so. The market capitalization of YFI is already extremely high at $466 million and top 36th.

Can YFI Price Pull A ChainLink?

ChainLink has been one of the best performing coins in the past few months getting into the top 10 decisively. LINK price is currently $16 but has been as high as $20 and the market capitalization of ChainLink is now $5.6 billion, ranked 5th.

That mcap would mean a 12x increase from its current price for Yearn.Finance. It would put the digital asset at around $180,000, a ridiculous number, however, that’s only possible because the supply of YFI is extremely small at 30,000.

According to CoinMarketcap, the concentration by large holders is around 83% which means most of the coin supply is in the hands of whales. A very interesting metric is ‘Holders making money at a current price’. CMC says it is 100%, which means that literally everyone is making money right now as YFI simply continues posting new all-time highs.

Considering how massive this bull rally is, it’s hard to precisely determine where the next stop for YFI is, however, looking at the chart, we can more or less think about $20,000 which would constitute an important psychological level.

The biggest red flags for the bulls in the short-term would be to lose the 12-EMA, currently at $14,920 followed by a clear loss of the 26-EMA and bearish continuation. As long as the bulls can hold one of these 2 EMAs, they will be at no risk. The RSI has been able to cool off thanks to periods of consolidation and the MACD has been bearish for some time before without really having any effect on YFI’s price.

N*GGER COIN? Blockfolio Hacked, sends offensive messages! This is what you need to know

Earlier today the cryptocurrency management application, Blockfolio was hacked. The attacker sent several extremely offensive messages to many users. No…

BlockFi May Soon Reduce Interest Rates To 0 or Negative, Alternatives?