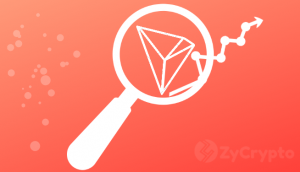 The woes of Bitcoin Cash (BCH) hard fork, Bitcoin Satoshi Version (BSV) is not yet over as the Tron coin has just displaced it and pushed to the 9th position in Coin market capitalization.

This is following a recent announcement by Justin sun, who also doubles as the CEO of Tron Foundation and BitTorrent Foundation that one of his visions for the Tron Token(TRX) in 2019 is to see it move to the 4th position in market capitalization.

Those that had been following his vision and how fast they are realized must have noted that his statements are thoughtful before they are made. This could be confirmed by his statement in Oct 2018 that the Tron token would climb by to the top 10 coins within 6 months after it was displaced to the 12th position due to the high negative trend in the crypto market.

That vision was realized within 2 months of its announcement. However, some factors that could have added this development around an increase in the position of TRX by one are:

1) The speculative nature of the crypto market: it is believed in many quarters that one thing that leads to a shift in the prices of crypto is speculation. So, this announcement that Tron could move to the 4th position in 2019 and also have a decentralized ecosystem larger than that of ethereum, tells crypto investors and hodlers that the coin would be doubling at least within the year to attain the proposed vision.

This announcement of ‘EtherGoo’ that will now be renamed to ‘TronGoo’ will enable the users of the game to not just earn the Goo token but also Tron Token(TRX) might and this has contributed to the increase in the price of Tron token. At the time of writing, Tron token (TRX) has a market capitalization of about $1.586 billion and trades at about $0.024 with a positive price change of 5.53% within the last 24 hours.

Tension has gripped users of Australian exchange Mycryptowallet as they are unable to make withdrawals from their accounts. The exchange…