TRON’s platform is powered by the TRX cryptocurrency, investing in which allows crypto users to be part of the TRON revolution

With the battle to be the number one smart contract platform heating up, TRON (TRX) is competing harder and harder to edge out the likes of Cardano and Polkadot to earn the “Ethereum killer” moniker. Indeed, there is now more Tether (USDT) supply on the TRON network than Ethereum. Trading at around $0.075 at the time of writing, TRON is perhaps a dark horse in the programmable money race.

Despite May’s crash initially wiping out around two-thirds of TRX’s value, the token is currently doing better than it was in March. In this article, we will explore whether Justin Sun’s blockchain project can continue to gather momentum despite the prevailing bearish conditions.

TRON was priced at $0.001984 at launch and swiftly entered the crypto bull run in 2017-18, leading to its all-time high of $0.3004. However, the price surge was followed by a sharp crash in the market and TRON, like many other low-priced cryptocurrencies, lost most of its value. It recovered within the next few months, trading between $0.025 and $0.040, but failed to completely regain lost ground. It started 2021 within the same price range but has seen dramatic surges over the last five months which has placed TRX back on the crypto investors’ map. 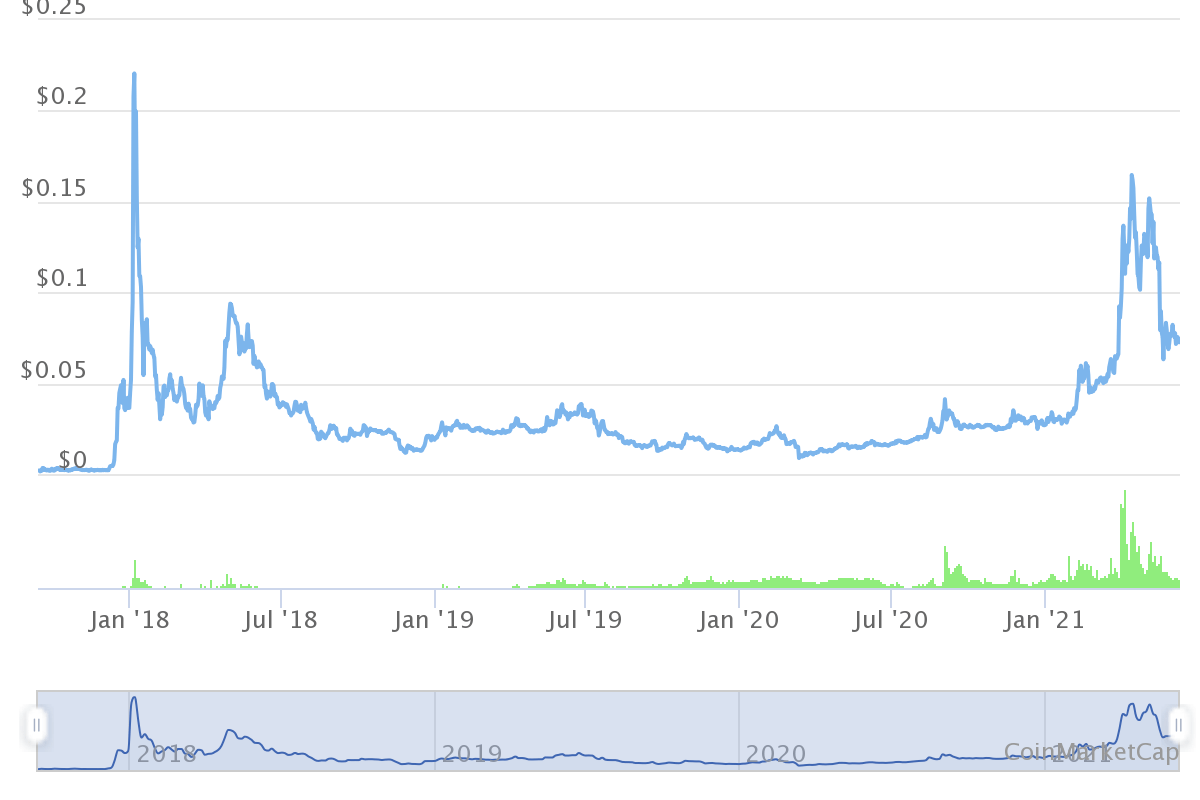 During the bull run, TRON fluctuated between $0.11 and $0.16 from mid-April to mid-May. However, the currency yet again failed to consolidate its position above the $0.10 price level and experienced a downward turn. At the time of writing, TRON is trading around the seven-cent region.

What Could Affect the Price of TRON in June?

TRON has historically forged partnerships and improved its blockchain infrastructure capabilities in order to improve its value in the market. Last year, TRON experienced a surge after reports suggesting that the project’s decentralised application (dApp) transaction volume surpassed Ethereum’s. Its new wave of growth is also being seen as an indication that TRON is finally catching up to Ethereum and a further increase in dApp activity is expected in the coming months.

TRON has also made way for its innovative approach and ambitions of digitalising the entertainment industry by acquiring the popular torrenting site, BitTorrent. It is also one of the small range of cryptocurrencies that will be supported by the latest Samsung smartphones. TRON is also expanding in China, the world’s most populous country, by working with Baofeng Group, the so-called Netflix of China, and Chinese search engine Baidu.

While negative headlines regarding increasing regulatory barriers and Tesla’s decision to stop accepting Bitcoin payment did not go down well with the market, it is safe to say that the recovery from the May 19th crash has already begun.

Bitcoin has improved its value by over 10% in the last couple of days and the market is gearing up for a potential bull run that is fueled by the growth in the adoption of the world’s number one cryptocurrency. TRON has always reacted positively to signs in the wider crypto and financial market and historical sentiment shows that a bull run for the crypto market means a bull run for TRON.

2021 looks promising for TRON as the token surpassed the $0.05, $0.10 and even $0.15 price levels within the first six months of the year. Its fast and scalable blockchain coupled with its vision of revolutionising the digital entertainment industry means that TRON will continue to forge crucial partnerships and experience steady growth.

According to analysts at Digital Coin Price, a price rally is expected to begin in June with TRON expected to reach over $0.10 price level, making it an attractive period for investors. TRON is no stranger to sudden growth spurts, as seen in April this year.  Long Forecast, on the other hand, predicts that TRON will fluctuate between $0.125 and $0.20 from June to November and that the token will end 2021 at $0.19. 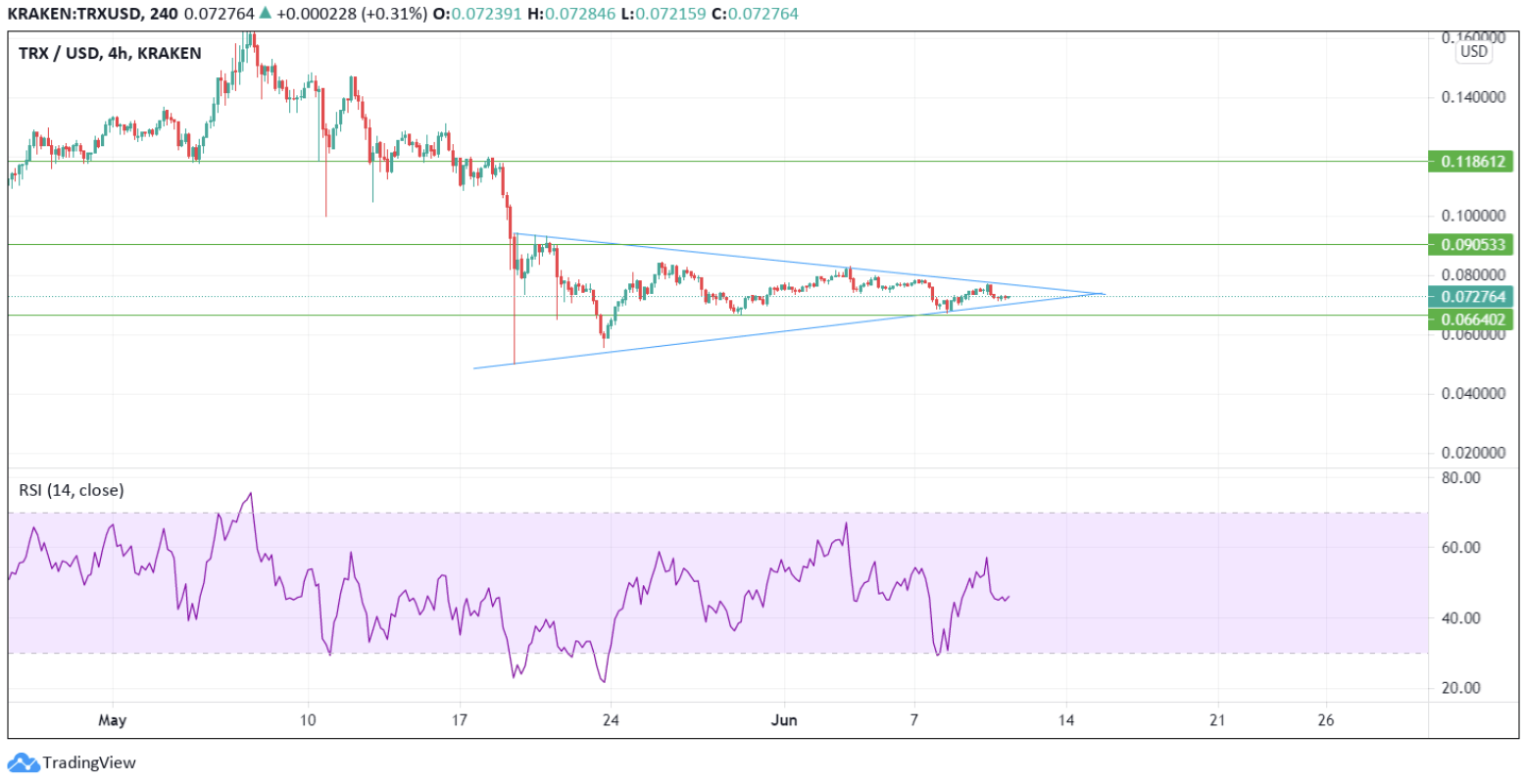 TRX/USD can clearly be seen forming a symmetrical triangle pattern on the 4-hour chart — a pattern currently on show in most of the crypto market. If the recent positive shift in sentiment can lead to an upside breakout, realistic targets for June are the resistance levels found at around $0.09 and $0.12. Should momentum collapse, TRX has established strong horizontal support at $0.066, and so could settle here in a worst-case scenario.

All in all, given TRON’s slow but steady ascent amongst its competitors for smart contract supremacy and the beginnings of a tentative recovery in the crypto market, it seems reasonable to expect TRX to be back above $0.10 in June. With a strong bullish breakout, we could even possibly see $0.12.

Please note, the details provided above are entirely a personal opinion of the writer, derived from the relevant market data. None of these are meant to be taken as direct investment advice.

Report: Bitcoin to Bounce Back From Black Wednesday Crash

A report from Stack Funds suggests that Bitcoin dominance is about to experience a bounce, supporting Bitcoin’s price in the…

Mining the world’s leading cryptocurrency is, as of present, more rewarding than it has ever been the crypto’s history Bitcoin…