Tezos price has traded higher for the first time since declining from its 5-month high of $3.40 on 23 January. The green candle on the daily log stems a four-day losing streak that had seen XTZ price touch lows of $2.60.

According to data on crypto market aggregator CoinMarketCap, Tezos price is up nearly 5% in the past 24 hours and more than 10% in the past seven days. The cryptocurrency’s 24-hour trading volume has increased by 42%, with the market cap up by about 1.7% to $2.2 billion.

The positive outlook for Tezos (XTZ) follows increased network activity amid optimism about future developments, including its DAO and imToken integration.

On-chain data shared by one Tezos enthusiast shows that smart contract activity on the Tezos blockchain has increased tenfold since the network’s Delphi upgrade last November. Gas consumption has also gone down by almost 75% and funded accounts have grown 10% over the past 30 days to bring Tezos closer to the milestone of 1 million funded accounts.

It’s all building towards a bullish bias for XTZ/USD after the recent correction.

Tezos rebounded off support at $2.6 to break above a major horizontal resistance line that had seen bulls struggle for an upside. The barrier capped bulls’ advances between 03 September 2020 and 15 January 2021, before a breakout saw prices increase from $2.20 to around $3.18.

But despite a daily close above $2.80, a pullback saw bears sink XTZ/USD to $2.40 before another recovery pushed prices to $3.40. Another correction precipitated by profit-taking and Bitcoin’s dump below $30k allowed sellers to retest previous resistance-turned-support level near $2.68.

With price currently testing resistance near $3.00, a break to the upper boundary of an ascending parallel channel would gift bulls a chance to aim for prices near $4.00. Supporting Tezos’ bullish bias is the daily RSI’s positive divergence, which suggests buyers are likely to strengthen. A rally within the broader market will accelerate the flip. 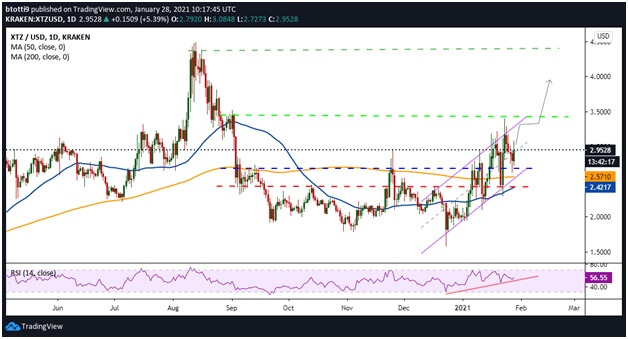 The curve of the shorter term 50-SMA is also beginning to close towards the longer-term 200-SMA. A golden cross formation on rising volumes would confirm the bullish trend and see XTZ/USD target $4.48 and $5.50 levels.

On the contrary, if bulls fail to consolidate above $3.00, a short term downturn could see prices fall to the 200-SMA ($2.47). The 50-SMA would provide the next support level at $2.42, with any further losses likely to encourage sellers towards lows of $1.8.

The post Tezos bullish as XTZ bounces off 50-DMA to recover above $3.00 appeared first on Coin Journal.

The blockchain data analytics sector has seen much investment this year, with both Messari and Chainalysis also completing funding rounds…