Stellar rallied to highs of $0.418 as some altcoins exploded into life amid high exuberance within the crypto market

Other altcoins have also seen major moves up the charts, including Cardano (ADA), EOS, Ripple (XRP) and Nano (NANO).

But although alts have exploded into life, the market is experiencing extreme volatility at the moment. This means that prices are likely to fluctuate big time. Stellar could reach a new all-time high or flip bearish and retest support at $0.12.

XLM/USD has printed consecutive bullish candlesticks over the past four days and could add another higher daily close. The bullish run for XLM/USD comes after the altcoin broke out of a descending triangle pattern, driven by positive fundamental news about Ukraine choosing to use the Stellar blockchain for its CBDC. 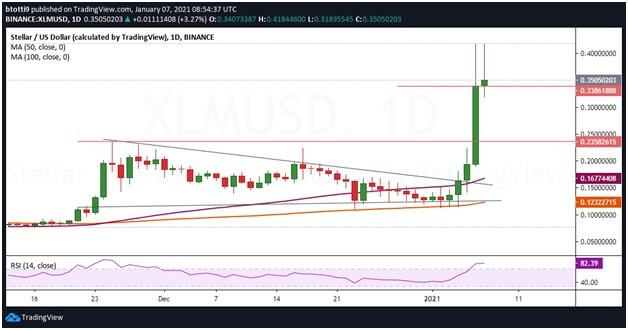 On the flip side, XLM/USD could drop to $0.12 in the short-to-medium term.

The long upper wick on the daily candle suggests bulls’ dominance has faced massive resistance. The chart also shows the Relative Strength Index (RSI) in the overbought territory that supports the retreat. While the potential for a downturn could rely on overall crypto market action, it is more likely bulls could be hitting exhaustion levels after such an epic price surge.

To retain the upper hand, bulls need to keep prices above two critical levels: $0.33 and $0.23. The latter price level is the scene of the most recent rejection that saw XLM/USD hit a downtrend as Bitcoin (BTC) rallied throughout December. Break this line and bears could have easy targets at the 50-SMA ($0.16) and 100-SMA ($0.12).

The post Stellar climbs to $0.40 as major altcoins burst into life appeared first on Coin Journal.

P2P transactions are driving crypto adoption in emerging markets like Vietnam and India Chainalysis, the blockchain data analysis platform, in…