Bitcoin (BTC) reached a new all-time high around $29,321 but could fall sharply in a blow-off top pattern

BTC/USD remains in an uptrend and might hit a new all-time (ATH) high above $30,000 by New Year’s Day. The bullish outlook follows Bitcoin recording prices above $29,000 for the very first time.

At the time of writing, Bitcoin is trading around $29,053, off intraday highs of $29,321 on the major US cryptocurrency exchange Coinbase. If bulls print another $1,000 candle today, BTC/USD could crack the psychological level at $30,000. In price discovery mode, there would be no telling where the next stop would be.

Every address that ever bought Bitcoin before it broke its 2017 ATH is in profit, with institutions that bought in the current bull market also realising massive gains already. But given the parabolic price action witnessed over the past few weeks, it’s likely a cool-off morphing into an extended sideways period or we might even see a blow-off top pattern.

According to one pseudonymous trader identifying on Twitter as Mr. Chief, Bitcoin’s price chart suggests the latter is likely.

The trader recently noted this as BTC/USD jumped above $29K.

“Notice the duration of each consolidation phase is shorter and shorter. We’re getting close to a blow-off top IMO.” 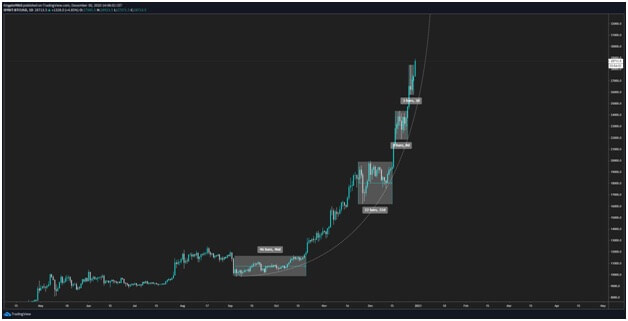 The pessimistic scenario above is likely given the technical picture on the 4-hour time frame.

The BTC/USD pair on the chart below shows that the price remains within a bullish channel. Also importantly, the trendline that presented as a previous resistance line now acts as the immediate support level.

However, the TD sequential has presented a sell signal in the form of a green nine candle, while the RSI is also suggesting divergence. If the price bounces off current levels or the $30,000 psychological barrier, the downside might be steep. 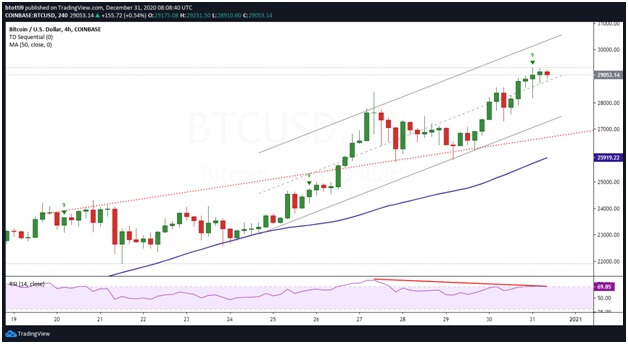 In this case, buyers can look to defend gains at the previous resistance line and the lower boundary of the upside parallel channel. The two levels offer initial support near $27,000. 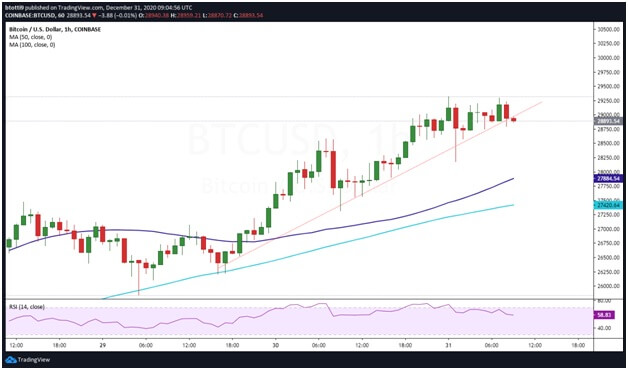 On the 1-hour chart, BTC/USD has crossed beneath a major support level presented by a rising trendline. The hourly RSI also suggests a negative divergence as it shifts from overbought territory. Short term, bulls need to push prices above the trendline, which will strengthen the overall bullish picture.

Where To Buy Ethereum (ETH) As It Continues Hitting New ATHs

Ethereum has seen its price rise by 99% in the past 30 days  What is Ethereum? Ethereum is a global,…

It has been a tough year owing to the global pandemic and its consequent crises, but that hasn’t stopped Ripple…