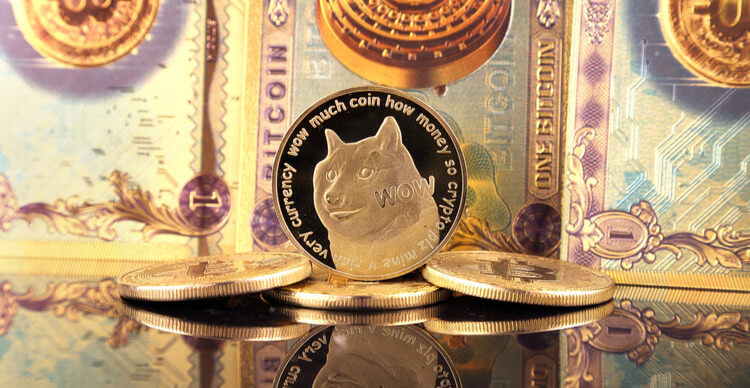 Dogecoin is among the best performing coins during the crypto market’s Monday recovery. Here’s where to buy the meme coin

Dogecoin is back in the green today, after the weekend’s market turnaround delivered a 12% bounce on the day and a recovery of 25% since last Monday. The “Dogefather”, Elon Musk, confirmed that he’s still a fan of the meme coin at last week’s “The B Word” event, providing more fuel for a further rally.

Read on to discover more about Dogecoin, as well as learning how and where to buy DOGE today.

How & where to buy Dogecoin in the UK and elsewhere

With the bull market seemingly back in full swing, investors are looking for the best place to buy Dogecoin today. We’ve shortlisted some of the best brokers and exchanges on the market to make life easier for you. Simply sign up with one of our reliable, regulated recommendations and fund your account. You’ll be ready to trade the top coins in no time.

Dogecoin is the seventh-largest coin by market capitalisation, and is without doubt the favourite token of many in the space, including Tesla CEO Elon Musk, who has previously called it the “people’s crypto”. Created as a joke in 2013 by Billy Markus and Jackson Palmer, Dogecoin was initially designed to parody the profit-seeking attitude of the crypto community, but quickly gained a loyal fanbase and became one of the leading tokens.Earlier this year, Dogecoin rose to become the fourth-largest crypto by market cap, achieving a peak capitalisation of over $85 billion. Its humorous origins seem to have been largely forgotten, with the token now considered a very serious investment by many.

Should I buy DOGE today?

Currently priced at $0.2223, Dogecoin is a long way off its all-time high, but is gathering serious upward momentum. This means that it arguably has lots of room to grow, but has already gone some way to confirming a persistent upward trend. The all-time high of DOGE sits at around $0.73, meaning that continued momentum could give Dogecoin holders a profit of over 3x.

Dogecoin’s apocryphal destiny is to reach $1. Major social media campaigns have been organised to try and achieve this goal on several occasions, to the point where this figure is believed to be inevitable eventually. Experts agree that $1 by the end of the year seems realistically achievable, and that the joe.

The post Old DOGE, new tricks: where to buy Dogecoin as it bounces 12% appeared first on Coin Journal.

Ethereum 2.0 to launch on 1 December

Ethereum 2.0 is set to launch on 1 December after the deposit contract reached its target a few hours ago…

Could Ethereum Outpace Bitcoin This Bull Cycle? Where to Buy Ethereum

Ethereum has seen its price rise by 12% in the last seven days. What is Ethereum? Ethereum is a community-run…