Microstrategy (NASDAQ:MSTR) stock managed to surge by roughly 113% since 8 Dec when it was downgraded by an analyst from Citigroup

On 8 December, 2020, Citigroup, one of the largest banks in the world, decided to downgrade MicroStrategy’s stock. Since then, MSTR stock posted gains of 113.27% as it rallied from $289.45 to $617.31. The price increase mostly came as a result of the Bitcoin (BTC) price increase. 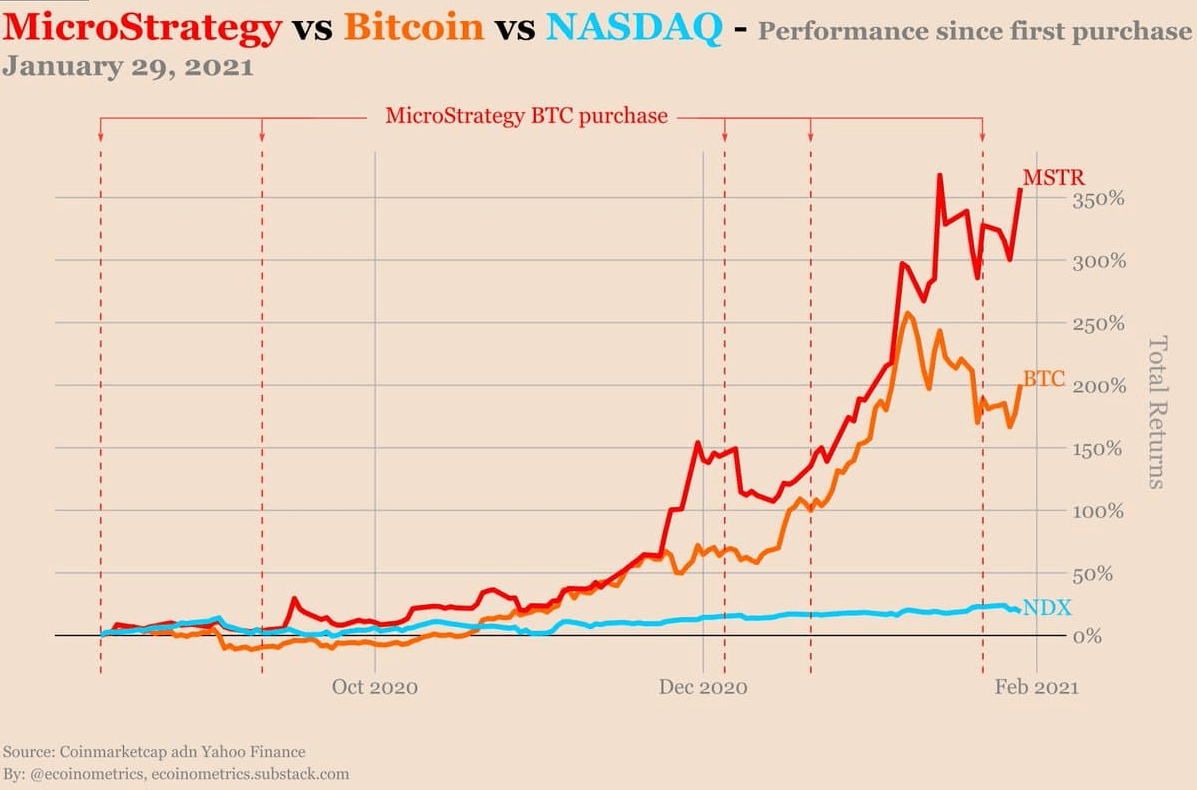 MicroStrategy stock unaffected by the downgrade

MicroStrategy has been very vocal about investing its treasury holdings in Bitcoin, making BTC its treasury reserve asset. At the moment of writing, it is the biggest public company Bitcoin holder with over 70,000 BTC worth roughly $2.4 billion at current prices.

On top of that, MicroStrategy announced it is raising $550 million in capital from convertible bonds. In an official statement, MicroStrategy stated it intends to invest in Bitcoin with the entire proceeds of the bond. This statement is likely the main reason Citi decided to downgrade MicroStrategy.

At the time, Citigroup analyst Tyler Radke downgraded MSTR to sell rating. He stated that he acknowledges the impressive returns on MicroStrategy’s Bitcoin investment, but said the market is overpricing its core business. He wrote:

“MSTR’s Bitcoin investment has returned $250M ($26 per share-worth or +20% towards stock) since August 2020. While impressive, the return pales in comparison to the 172% return that its stock made. At the current stock price, our analysis comes to the conclusion that the market is pricing in much more optimistic valuation scenarios for MSTR’s core business and Bitcoin.”

Since December 2020, on the other hand, the price of Bitcoin saw an explosive rally. While Radke’s scepticism towards the core business of MicroStrategy certainly has some merit, Bitcoin saw a rally of over 100% in December, pushing from $18,319 all the way to an all-time high of $42,000.

MicroStrategy remains an important institutional Bitcoin supporter, as well as a multi-billion dollar business intelligence firm. As long as Bitcoin’s price continues to surge in the short term, the stock price of MSTR will most likely have a positive effect.

Michael Saylor, MicroStrategy’s CEO, remains fully confident in the company’s position on Bitcoin. In the Q4 financial results for 2020, Saylor stated that the company plans to hold their current BTC positions as well as invest additional excess cash flows into the largest cryptocurrency by market cap.

Tencent to build a blockchain for the Chinese wine industry

High quality wines depend on very specific conditions to achieve their quality, so it is important that distributors and consumers…