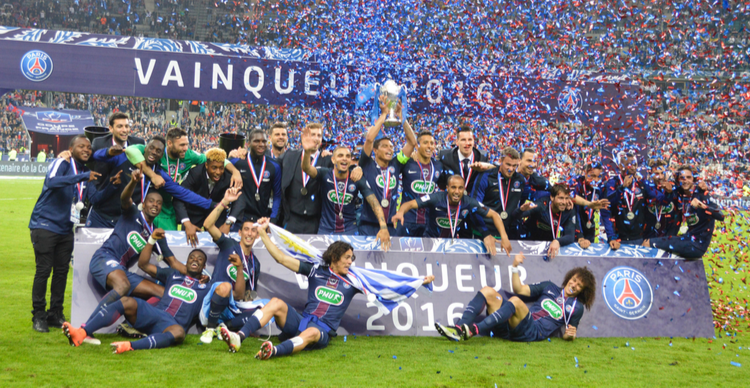 Following exciting news for the fan token, PSG surged by almost 70% in the last seven days. Read on to find out where you can get your hands on PSG before its next price hike

One of the most exciting developments in crypto in recent times has been the introduction of fan tokens, which combine the fun of both sport and cryptocurrency. Tokens such as the Paris Saint-Germain fan token (PSG) are exploding in popularity right now — even famous footballers are getting in on the action!

If you’re feeling left out though, don’t worry. Here’s an overview of what PSG is and how you can get your hands on it.

If you want to buy PSG or any other kind of cryptocurrency, you’ll need to sign up to a broker or exchange. There are other places you could buy crypto, such as decentralised exchanges (DEXs), but these are unregulated.

If you want to keep yourself and your funds safe, the best option is to select a reputable and legally compliant platform. To make things easier, here are a couple of our favourites:

What is the Paris Saint-Germain fan token and what’s all the fuss about?

Fan tokens are Ethereum-based tokens issued through the Socios.com platform that give fans a stake in a particular sport or esports organisation. Token holders can get exciting rewards such as team merchandise and VIP experiences, as well as being able to vote in club decisions like what song should play when the team scores.

PSG is the fan token for the Paris Saint-Germain football club and it received a boost this week when it was revealed that ex-Barcelona star Lionel Messi had signed with the club and would receive part of his wage in PSG tokens.

Should I buy PSG today?

With the news that Messi is a PSG holder, now might be a great time to buy the fan token. The Argentine footballer has raised awareness of PSG, which is now the sixth highest trending token on CoinMarketCap. This could signal further moves to the upside in the near future.

What’s more, Paris Saint-Germain recently finished second in Ligue 1 and have dominated French football over the last decade, attracting world-class signings such as Neymar, Kylian Mbappé and David Beckham. This strong performance will likely see their fanbase grow, which could drive more demand for the PSG token.

PSG is currently in consolidation mode after hitting its all-time high of $63.60 on Tuesday. Although the fan token has dipped below $42 at time of writing, support from the 9-day moving average at $38.58 could limit further downside.

Increased demand following Messi’s signing could see bulls target the psychological barrier at $50 next, before pushing onwards to set a new all-time high in the coming weeks.

The post Messi gets paid in PSG — Where to buy Paris Saint-Germain fan tokens appeared first on Coin Journal.

As DeFi lock-in in Ethereum averages $14M each day, the total fees of the second-largest crypto network remains above that…