However, the march to the yearly highs for LTC/USD has faded, and the downside is coming at the same time as Bitcoin (BTC) retreats from highs of $34,800.

BTC price is currently dancing with support around $30,500 amid increased profit booking. Litecoin is also struggling with increased sell-off pressure as bears appear set to seize on the exhaustion among bulls to push prices lower.

At the time of writing, Litecoin is trading around $150, about 5% up on the day and nearly 14% in the green over the week. But LTC/USD remains nearly 59% off its ATH, sharply contrasting with Bitcoin that has shattered its own record several times since breaching the $20,000 barrier.

While Litecoin could yet eye the psychological $200 level, the outlook at present suggests downward movement or descent into an extended consolidation phase. 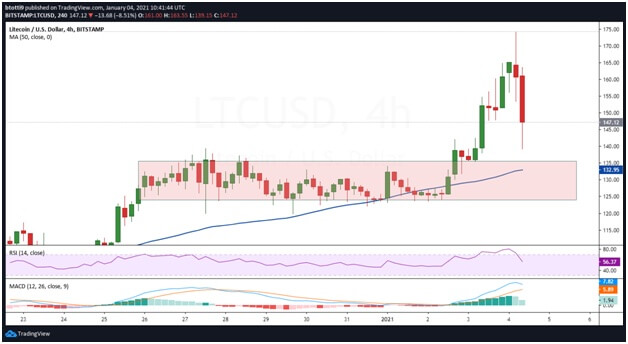 Litecoin had traded in a largely sideways trajectory over the past few weeks but the cryptocurrency looked to spring into life over the Christmas and New Year period.

The breakout from the narrow channel that had capped prices around $120­—$135 saw bulls breach the $150 hurdle on their way to testing resistance at $174.

But the upside momentum seems to have faded over the past few hours, with prices dropping sharply to lows of $140. Litecoin bulls are battling sellers around $147 at the time of writing, with the 4-hour chart suggesting LTC/USD could drop to the 50-SMA if bears succeed in breaking below the $140 support level.

The MACD indicator remains in a bullish zone but is showing decreasing interest on the part of bulls. A similar negative outlook is suggested by the RSI that is descending towards the midpoint. If the technical indicators continue on the said trajectory, LTC/USD could likely rely on support around $125. 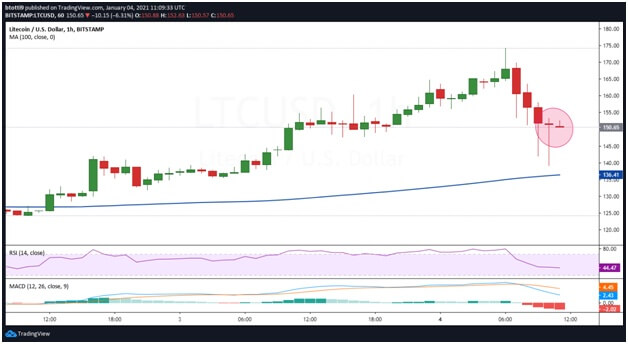 On the hourly chart, the price remains above the 100-SMA ($136), but a series of lower highs and higher lows suggests the uptrend is broken. The hourly MACD has formed a bearish crossover and the RSI is dipping below the midpoint.

Strengthening of these indicators in the direction they currently point to would signal further decline. Litecoin’s value against the US dollar could thus plunge to the critical $100 level.

Crypto remittance payments up by 55 percent in Africa ⏐ Chainalysis

As residents turn to digital currencies to avoid high fees and fiat currency instability in parts of the continent, cryptocurrency…

BCH and VET have gained double-digits while ADA bulls are eyeing a break above a major barrier Bitcoin Cash (BCH),…