Another week has passed, and it has been nothing short of exciting on the cryptocurrency market. Bitcoin went on to lose a serious chunk of its value as it plunged below $8,700 only to recover a few days later and touch $9,600. However, BTC is relatively indecisive over the past couple of days as it got rejected at that level, and it’s currently trading slightly below it around $9,400.

If Bitcoin can climb back above this important resistance level, it may take another shot at the coveted $10,000 mark. As of yet, though, it appears that bulls are losing momentum and regrouping.

Altcoins managed to catch a break while Bitcoin was plummeting, as some of them, including MATIC, Cardano, and a few others, marked notable increases. Bitcoin’s dominance remains rather intact, signaling that nothing has changed from a macro perspective. Ethereum was the winner during the past two days, as it managed to increase by 10%, reaching a 30-days high.

The week was marked by news concerning institutional investors. First, new data revealed that Grayscale has been buying quite a lot of BTC. In fact, it bought 50% more than all the bitcoins mined over the past 100 days.

At the same time, Coinbase acquired a leading cryptocurrency brokerage to further strengthen its institutional focus. The Winklevoss-owned exchange Gemini partnered up with Bitwage to launch a Bitcoin 401 (k) plan, while also teaming up with Samsung to integrate its mobile app in the tech giant’s blockchain wallet.

In any case, it appears that smart money is becoming increasingly interested in the field, and it’s exciting to see what this will mean for Bitcoin going forward. 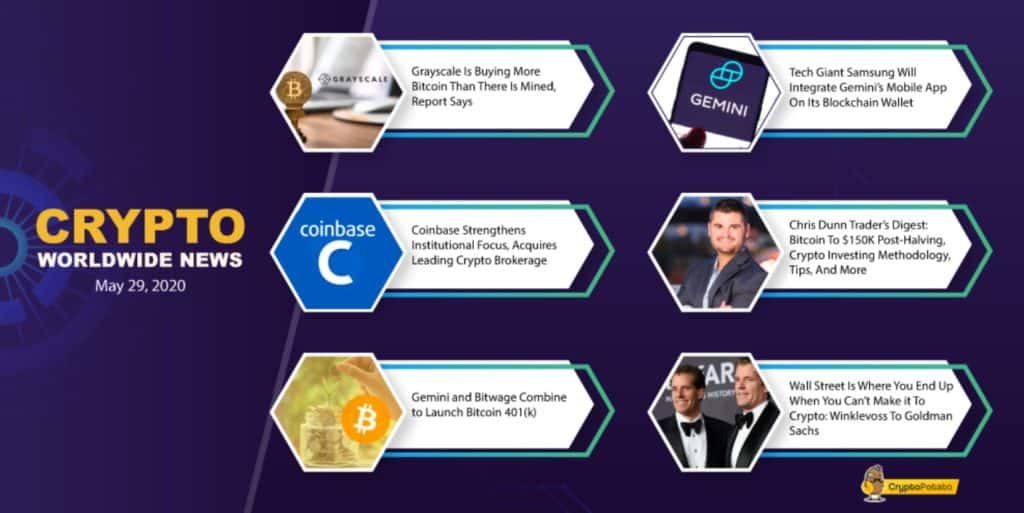 Wall Street Is Where You End Up When You Can’t Make it To Crypto: Winklevoss To Goldman Sachs. According to the prominent Bitcoin proponent Tyler Winklevoss, Wall Street is the place people end up when they can’t make it to crypto. This comes as a response to a recent report following a Goldman Sachs conference call on Bitcoin and Gold.

Chris Dunn Trader’s Digest: Bitcoin To $150K Post-Halving, Crypto Investing Methodology, Tips, And More. Chriss Dunn is a well-known cryptocurrency YouTuber and a vocal participant in the community. He thinks that Bitcoin might reach $150,000 if we simply assume that it will gain 40% of what it gained after the previous halving.

Gemini and Bitwage Combine to Launch Bitcoin 401(k). Gemini has partnered up with Bitwage to introduce what’s reportedly the world’s first Bitcoin 401k plan. It enables companies to provide their employees with the ability to invest in Bitcoin.

Grayscale Is Buying More Bitcoin Than There Is Mined, Report Says. According to a recent report, Grayscale has bought 50% more Bitcoin than it was mined in the last 100 days. This signals a serious institutional interest in the field, and it’s interesting to see if it would impact Bitcoin’s price.

This week we have a chart analysis of Bitcoin, Ethereum, Ripple, Tezos, and Chainlink – click here for the full price analysis.

The post Is Bitcoin On Its Way To Finally Break $10K? The Crypto Weekly Market Update appeared first on CryptoPotato.