IOTA price could drop to lows of $0.23 if bears tighten their grip on short term action in the current phase of crypto sell-off

IOTA is trading lower on the hour, mirroring the negative trend engulfing the majority of the crypto market.

At the time of writing, IOTA is trading around $0.30 and is down more than 5% in the past hour. Overall, the 29th ranked cryptocurrency is looking like it will slip lower if the downward pressure holds.

However, if the bearish signals fail short term, a rally to $0.45 and higher will be possible.

The technical picture for IOTA on the daily and 4-hour charts suggests bears are refusing to give bulls any chance. The setup is largely bearish and will spell doom if prices drop below a major support level indicated by the 50-day and 200-day simple moving averages.

After breaking above a multi-month horizontal resistance line around $0.30, follow-through action catapulted bulls near $0.45. But their joy has been short-lived as bears pushed back to plunge IOTA/USD to around $0.27. 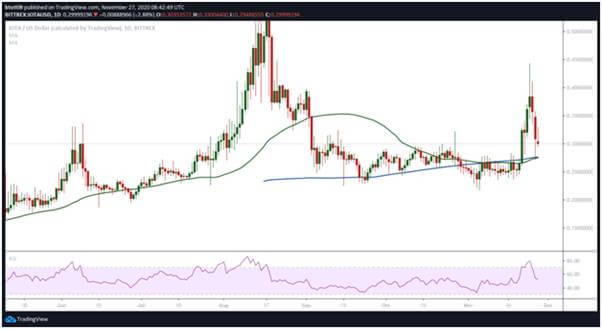 The daily chart features a green nine candlestick of the TD Sequential, which suggests bears are likely to continue with their plans to sink prices further.

The Relative Strength Index also suggests bears are building a downside momentum. The indicator has bounced off overbought territory and is close to the midline. If the path to the oversold region proves the easiest one, IOTA/USD could dip to lows of $0.23. 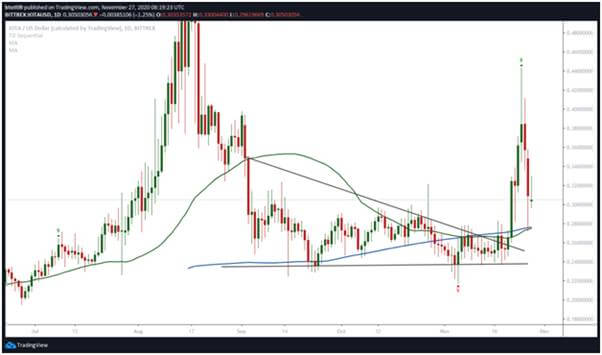 As can be seen in the daily chart, the recent breakout above a descending wedge pattern offered bulls a chance to retest the $0.45 area. But the bullish reversal highlighted by the wedge pattern will not hold if the sell signal reinforces increased sell-off pressure.

To prevent a retest of the lower trendline of the aforementioned pattern, bulls need to keep prices above the 50-SMA and 200-SMA (daily chart).

The 4-hour chart suggests bulls have a fight on their hands as the price has crossed below the 50-SMA and a dip to the 200-SMA will cement the bearish outlook. The next support levels, in this case, would be at $0.21 and $0.19. 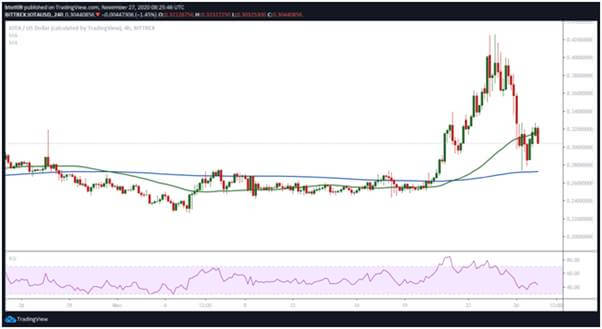 However, a surge in buying pressure for IOTA coupled with a decent run for altcoins, in general, could hand bulls the chance to invalidate the bearish setup and force sellers to abandon their short term plans.

Celsius Network chief executive has predicted that Bitcoin will touch $100,000 before next year. Alex Mashinsky, CEO of the CeFi…