It goes without saying that so-called Initial Exchange Offerings (IEO) are catching up to speed. Following the success of Binance’s Launchpad platform, other exchanges have jumped on the bandwagon, setting up variable solutions of their own. Huobi Global was no exception.

Huobi’s exclusive token listing platform is called Huobi Prime, and it promises to deliver something different to Binance Launchpad and other alternatives.

Instead of launching tokens at a predetermined price, Huobi Prime lists them for direct market trading. However, users are only allowed to trade the newly listed tokens against Huobi’s native cryptocurrency – the Huobi Token (HT).

The entire process goes through three separate trading rounds, each one of which has its highest traded price capped to limit volatility and reduce investor’s risk.

Once the three rounds of limited trading are finished, the exchange lists the new token for unlimited and regular trading immediately on its conventional cryptocurrency exchange.

The platform already has one selective token listing successfully completed. It was for the TOP Network project. The three rounds were completed in less than 20 seconds, selling a total of 1,500,000,000,000 TOP tokens.

The process is incredibly simplified, but it’s important to understand it precisely to stand a chance in the high-demand buying race. So, let us walk you through the process of participating in the so-called “Selective Token Listing” on Huobi Prime.

There are a few key considerations you have to be aware of. These are:

Preparing For The Selective Token Listing on Huobi Prime (Requirements)

Step 1: Before each event, you have to confirm your eligibility. To give priority to HT holders, Huobi Prime has a requirement that everyone must have an average daily holding of 500 HT for 30 days before the Huobi Prime trading session. However, they’ve also made it clear that this may vary based on the price movement of HT. Any changes will be disclosed at the appropriate time.

Users will be able to check their average daily holdings of HT for the past 30 days on dedicated screens, which look like this: 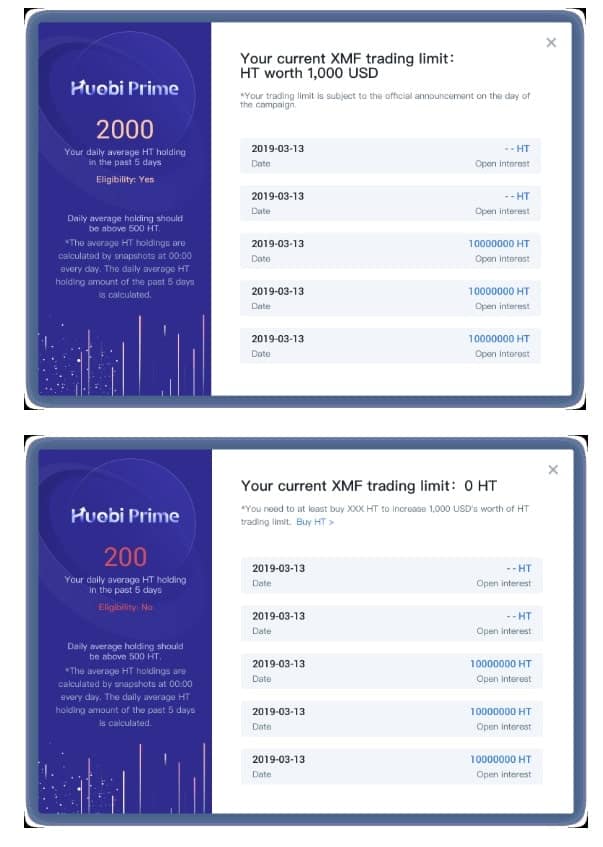 As you can see, the screens clearly show your daily holding average and whether or not you would be able to participate in the listing. Furthermore, at the top you can see your trading limit – it shows how many tokens you will be allowed to buy during the listing process.

Huobi has stated that the limit is going to be set at 1000 HT to avoid whale behavior. Naturally, the KYC requirements for Huobi’s traditional cryptocurrency exchange are in force for Huobi Prime as well.

Step 2: Be Ready! As we said above, the first Selective Token Sale of TOP Network was completed in less than 20 seconds! You have to be very quick!

On the day of the event, all you have to do is log in to your Huobi account and click on the “Exchange” button right at the top of the navigation menu.

As soon as you do, this is what you’re going to see:

On the left side, as well as on the right, you will see a timer countdown. It shows how much time you have left until the beginning of the listing. As soon as the clock shows 00:00:00, the first Price Limit round will begin.

What Are Price Limit Rounds?

As we mentioned before, Huobi uses a different path compared to Binance Launchpad and other IEO platforms.

In an attempt to foster “fair” price discovery and to reduce the risks that severe volatility brings to investors, the platform introduced the so-called “Price Limit” rounds.

There are three rounds of this kind, each one of which lasts for exactly 20 minutes. After each round, there is a 10 minute period of clearance, when Huobi distributes the tokens as per the market orders.

It’s important to know that users are only able to trade against HT in these rounds and to place only regular market spot orders. Hence, you won’t be able to use limit orders until the three rounds are finished.

Also, the highest tradable price of each subsequent round will be no lower than that of the previous round, which is essentially where users can profit.

As we said in the beginning, the entire process is particularly simplified. During the three Price Limit rounds, users only have to enter their market spot orders with the desired amount of tokens to be bought.

This is how the interface looks:

As you can see, you will be able to buy and sell tokens. In this example, we’ve used TOP because it is the only event that has already passed on Huobi Prime.

If you want to BUY tokens, you have to put in the desired amount and simply hit the BUY button. You can also use the percentage markers to make it even easier.

The same is true for selling. If you want to SELL – input the amount you want to sell and hit the SELL button.

Regardless of your choice, after you hit the respective button, you will have to go through a rapid slide authentication. It looks like this: 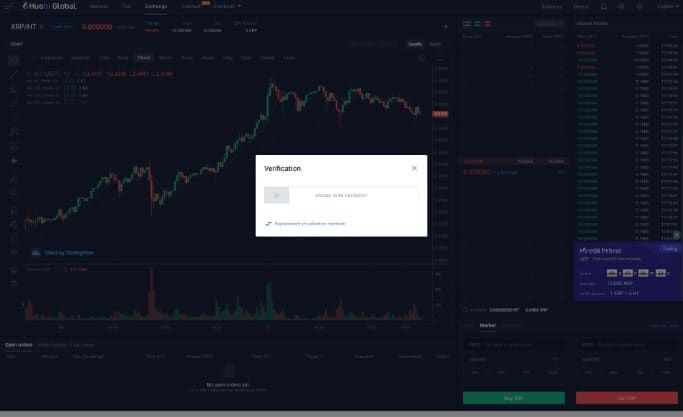 Do this, and your order will be processed. After that, you have to wait for the end of the round and Huobi will clear the order, reflecting the changes in your balance sheet.

That’s everything there is to it. After you have gone through this, you can wait for the three rounds to finish, after which you can start trading the new tokens freely on Huobi Global, just as if you are trading any other supported asset.

Pros and Cons of Huobi Prime

In general, Huobi Prime manages to deliver straightforward access to new tokens and introduces a model which profits early investors.

However, it’s also worth noting that the first selective token listing of TOP Network was accompanied by a number of technical issues and a lot of users weren’t able to take part because of the high demand and the platform’s inability to cope with it.

Should Huobi Prime find a way to cope with the incredible demand, it can become an exemplary platform bringing many benefits to both investors and projects seeking funding.

The post Huobi Prime – The Beginner’s Guide: How To Invest In Token Sales appeared first on CryptoPotato.

The Federal Reserve made an unexpected announcement at 5 PM U.S. Time Sunday afternoon. Along with another $700 billion immediate…

Bitcoin Increased 34% In April: S&P 500 And Gold Are Well Behind

Top global assets closed the month of April in the green, with Bitcoin coming through as the best-performing asset of…