A member of the cryptocurrency community has revealed the results he saw from “HODLing” 50 different altcoins since “mid/late” 2017. It turns out that the majority of his investment is almost gone.

Startup investor and member of the cryptocurrency community Marc de Koning (@Koning_Marc) has recently revealed the results of holding altcoins since mid/late 2017.

I just analyzed my hodl portfolio that I’ve had since mid/late 2017.
Here’s what I found:
Out of 50 coins that each had 1 btc put in, the overall current value is between 0.02 and 0.3 btc per bag.
-Many coins delisted except for dexes which noone uses
1/3

He explained that he has invested 1 BTC in every one of 50 different altcoins and that their current value is between 0.02 BTC and 0.3 BTC each. In other words, his losses range from almost 100 percent to 70 percent on the different altcoins.

He also shared his observations on the performance of the altcoins that he had invested his BTC in.

More alarmingly, he says that even those which had “great” technology behind them failed to appreciate after their initial surge. Most of the altcoins see an incredibly insignificant traded volume of less than 1 BTC per day.

As a conclusion, de Koning made a few comments. He said that diversification is not a proper option in the field of cryptocurrencies, while also outlining that altcoins are “bad long term investments.” He shared that most of the newer coins only have 1 good cycle where investors need to get out.

While de Koning didn’t disclose which altcoins he had invested in, it’s not that hard to see that almost all of them have been put under a lot of stress in 2018, losing the majority of their value. In mid-2017, for example, was trading at around 0.011 BTC, while it’s price at the time of this writing is 0.0013 BTC, which is a decline upwards of 90 percent. 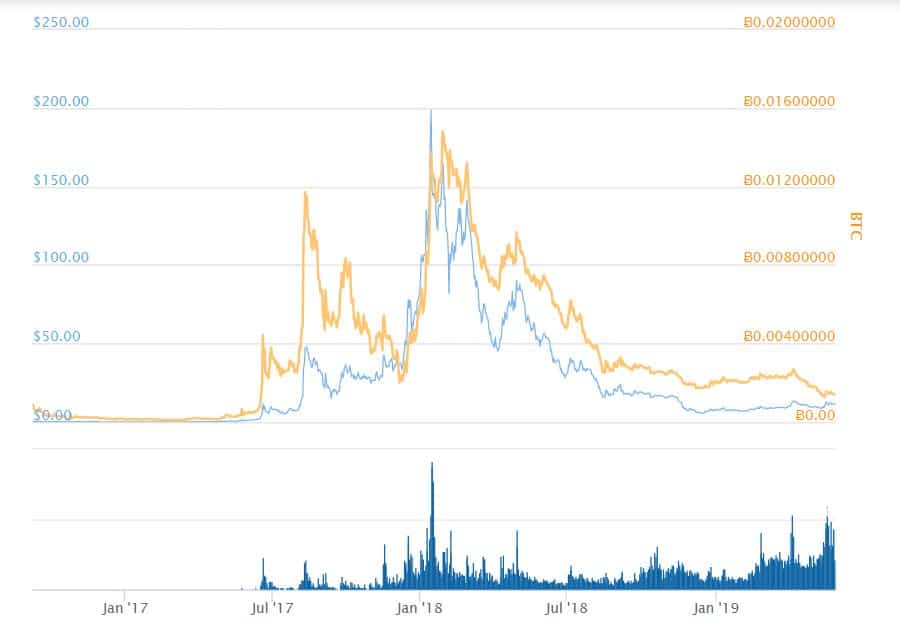 De Koning’s key takeaway also falls in line with what Cryptopotato reiterated – that most of the altcoins are losing their value over time. They tend to bleed their value away, be it quickly or slowly. This is properly highlighted by the fact that the largest 20 altcoins by means of market capitalization have changed quite a lot over the past couple of years.

It’s also important to outline that investing in cryptocurrencies (and in other assets, of course), requires precise timing in order to be profitable.

While Marc de Koning might have failed to capitalize on his investment so far, Cryptopotato reported back in March that investing in altcoins can also be very profitable. The example is rather clear – if one had invested in ETH during its ICO, his profits would have been huge even now when the price has dropped substantially during the bear market of 2018.

Of course, it remains utterly important to carefully pick the projects and cryptocurrencies that you will invest in. It’s important to have strong fundamental skills, financial responsibility, and, of course, to make well-informed decisions.

Despite the fact that the majority of altcoins lost an overwhelming chunk of their value in 2018, the general trust in them seems to be holding its ground. Whether or not that’s good, however, remains anyone’s guess.

One thing that never ceases to amaze me is how strong the general trust in altcoins is.
I doubt there is any other market that can go down 95% and still maintain as many believers.

The post HODL Bitcoin Proves Itself (Unlike Altcoins): This Man Had Lost Almost 50 BTC From Investing in 50 Different Altcoins In 2017 appeared first on CryptoPotato.

We have come a long way since the early rise and fall of the cryptocurrency market back in 2017. A…