Filecoin (FIL) launched its long-awaited mainnet last week, three years into its $205 million ICO. As the network went live, the price of its native cryptocurrency shot to highs above $80, reaching $150-$200 on some centralised exchanges.

But the excitement that drove the price to those highs appears to be disappearing fast, with news of a mining crisis hitting the cryptocurrency just days after its mainnet launch.

FIL/USD has dropped to lows of $30 after trading around $40-$45 for much of the weekend. The pair is currently trading nearly 25% down in the past 24 hours, with the price likely to tank further. 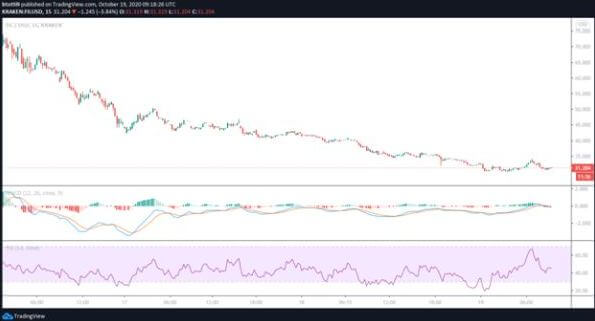 The price movement on the 15 – minute chart shows that an upside is forming around $31.00 against the US dollar, though the MACD and RSI both suggest that sellers still have the upper hand. Keeping the price above $30 will be crucial to preventing further downward movement.

As per a report by 8btc.com, the top five miners on the Filecoin network literally switched off their machines in an apparent “strike”. According to the miners, the economic model espoused on the network is “unfair”, with miners forced to purchase large amounts of the FIL tokens before venturing into mining.

One of the miners, Zhihu Cloud, reportedly operated only 276 machines, with over 7,700 of its 8,000 InterPlanetary File System (IPFS) switched off over the weekend.  Requiring the miners to deposit huge amounts of FIL tokens as collateral is proving to be too restrictive for some.

Miners can wait to earn FIL rewards and deposit that as collateral. However, rewards distribution is done over six months, and a miner wishing to initiate mining will not have enough tokens to start.

Buying tokens is another option, but miners argue that at current prices, FIL/USD is massively overvalued. Both ways of acquiring FIL tokens are seen as uneconomical for miners.

8btc.com notes in its report that Filecoin’s mining structure, in its current form, may see up to 80% of potential miners finding it extremely difficult to launch their operations. Perhaps the release of 25% of block rewards once a miner processes a block will avert an escalation of the mining crisis.

As it stands, FIL holders might yet see the token’s price tank beyond current levels to hit levels below Friday’s open price.

Where to buy THORChain: RUNE surges 33% despite tough week

News of a 7-figure hack shook THORChain this week, but the price of RUNE continues to climb DeFi ecosystem THORChain…