The ICO market seems to be resurging in a unique way. Recently, large institutions like Binance have started helping ICOs launch directly on their exchange through their Launchpad.

Binance Launchpad is a token launch platform that was created by Binance. So far, only three tokens have been launched using the Binance Launchpad. The last one was BitTorrent, and despite the long bear market, its price grew by 10X compared to its ICO price at its ATH. The other token launches were Gifto (9.6X in ATH) and Bread (3.5X in ATH).

The goal of the Launchpad is for Binance to provide a filtering mechanism. Binance is considered by many in the crypto community to be the leading institute in today crypto’s industry. Projects that are accepted for the Launchpad are considered promising and profitable.

With that said, the next upcoming ICO set to be launched on Launchpad will be FetchAI.

Despite living in a digital world that is more connected than ever, there are still far too many aspects of our systems that are disjointed and inefficient. We have cars that sit idly for over 90% of their lives without being utilized, ships that carry half empty containers around the world, overcrowded highways, and consistently vacant hotel rooms.

All of these inefficiencies create a needless expense that cuts into the margins of private business and our global economy as a whole. The common thread between all of these systems is their use of centralized command centers to manage inventory, guide traffic or operate shipping fleets. The systems are too one dimensional to execute actions while also identifying inefficiencies, to make sure the entire system is consistently improving.

Through the use of Artificial intelligence and decentralization via blockchain technology, Fetch.AI is developing a super intelligent infrastructure that connects all of the above systems to track operational data and create predictive functionalities that can not only increase efficiency but also exploit underutilized assets, to provide maximum value on the supply and demand side.

Fetch.AI’s model is comprised of 3 parts:

AEAs are fully abled digital citizens who act on behalf of individuals, devices, and organizations. AEAs connect to the Fetch ecosystem via hardware systems or data sources and then extract value through data discovery and its predictive functionality.

Cars or shipping carriers can delegate AEA’s to predict how much fuel to utilize based on weather or traffic conditions.

AEAs work within the parameters set by the system, identifying key pieces of information that are entered into deep learning algorithms to churn out the best solution. The system can also analyze the records of previous interactions with agents to consistently improve by learning from past mistakes.

OEFs support AEAs by creating an adaptive simulator environment that maximizes the AEAs interaction and connection capacity based on their transaction and searching records.

AEAs connect to OEFs via APIs and then collect information to interact with their target asset. Node operators are providing token rewards for facilitating and validating the connection of these systems.

Fetch ledger utilizes a combination of transaction chains and direct acyclic graph technology (DAG). DAG is an alternative distributed ledger technology to the blockchain. It is most popular with projects like Hedera Hashgraph, IOTA, and Byteball.

The Fetch system gathers transactions into chains and assigns them to several different transaction lanes simultaneously. A valid transaction under Fetch.Ai is defined as a transaction that contains information about the resources it makes use of. If the transaction capacity of the system becomes limited, it can merely expand by chain forking, and Fetch.AI tracks the origin of the new forks by setting parameters based on the resources used.

AEAs, OEF, and Smart ledgers all utilize AI and machine learning to provide the following four layers of trust information:

Dates: Token Sale is planned for 25th of February at 02:00 PM (UTC) and it will continue until 3rd of March or until the hard cap is reached

The FET token will be used in order to fund some the network functions and to incentive good behavior of the Agents.

Here are some of the most interesting Token Uses for the FET token:

Humayun Sheikh– An innovative entrepreneur, founding investor in Deep Mind with a record in revolutionizing trading in the steel sector and now focused on changing the way we transact and travel.

Toby Simpsons– Producer of the Creatures series of games and an early developer at Deep Mind. He has 30 years experience in software and ten as a CTO. Toby is now focused on crypto-economics.

Thomas Hain– Professor at Sheffield and established scientist in advanced machine learning AI who bridges the real world and academia and is inspired by the opportunities AI brings to modern society.

Team and advisory board: For a project that would like to penetrate the challenging market of AI and Machine Learning, FetchAI is in the right place. Many of the team are former workers of Deep Mind, an AI company which developed cutting-edge tools in the neural networks field. Also, the company succeeded to recruit some very impressive advisors which bring vast experience in the right areas: economics, AI, etc.

On the other hand, there is no proven experience in blockchain technology among the leading figures in the team and advisors.

Short Term Project Potential: Fetch AI managed to enter the prestigious club of Binance Launchpad projects. This fact can have a significant impact on the first few months of the token in the market.

No Convincing Token Use: The token utility as explained is not convincing from an investor point of view, there are not enough reasons specified in the white paper to have a native token, and to show potential for the token to grow in value.

ICO Terms: After the public sale there will be 17.6% of the tokens that were sold for 21M USD, this means a total market cap of almost 120M USD which is very high for the current bear market.

Key for the evaluation: IF = Impact Factor WA = Weighted Average

Team & Advisory board: Extensive team of 38 Members, including a strong development, research, and IT people. Many of team are former workers of Deep Mind which is considered to be one of the most innovative Machine Learning and AI research company in the world. Based in Cambridge, a company founded in 2017, the founders, developers, and advisors all have impressive backgrounds. However, none of them has blockchain experience, Score: 8.65

Stage of the project: According to the roadmap, the test network is expected in Q1 2019. However, when examining their GitHub account, we see a medium activity. In their most active repository, FetchAI/Ledger 804 commits were pushed. Except for the last two all of the rest were conducted more than three months ago, Score: 8.0

Project Potential: Considering this ICO is being launched on Binance the short-term potential is excellent, long term this is a very ambitious idea which would be hard to implement and will have to compete with the Google’s of the world if and when it does, Score: 8.8

Community: 10K on telegram and 4K on twitter, but this project enjoys a lot of attention since it is being launched on Binance, and the Binance user base is in a sense the community, Score: 8.9

Token Use: Not enough justifications for a native token, Score: 7.75

ICO Terms: more than 24K ETH already raised, the Public Token Sale will have a hard cap of 6M USD for 6% of the tokens, that is a small percent of the tokens, with 11.6% already sold in the seed round it is problematic. Score: 7.5

White Paper: Well written whitepaper, with a detailed explanation about how the technology of the Fetch.AI works. Score: 8

Technology and Code: According to their whitepaper the technology seems very innovative, and with the great team they will probably be able to fulfill their vision. Score: 8.6 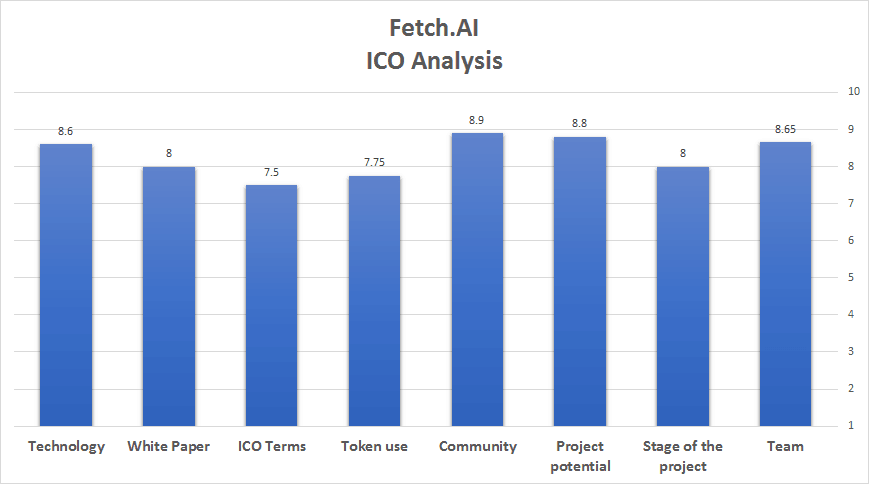 The post Fetch.AI: Project Review And Rating Ahead Of Fundraising (Binance Launchpad) appeared first on CryptoPotato.

On our previous price analysis, we have mentioned the fragility of the $8000 level and that Bitcoin was steady for…

Bitcoin Price Analysis Jan.26: The Tight Range Is Still Alive Despite an Attempt to Break Up

Over the past two days, Bitcoin had been keeping on moving sideways in the same range as before – $3500…