ETH/USD could break above $800 and target the $1,000 psychological level

The price of Ethereum (ETH) has reached a 24-hour high of $759, its highest level in over two and a half years.

At the time of writing, Ethereum’s price of $749 means the coin’s value has increased by about 29% in the past week. The cryptocurrency is up 2% in intraday trades. The optimism around ETH is clearly visible in whale activity, with data showing that accumulation has skyrocketed in the past two months.

According to analytics platform Santiment, 39 new whales’ accounts holding 10,000 or more ETH were added in the last two months. This came even as hodlers of 1—10,000 ETH decreased. 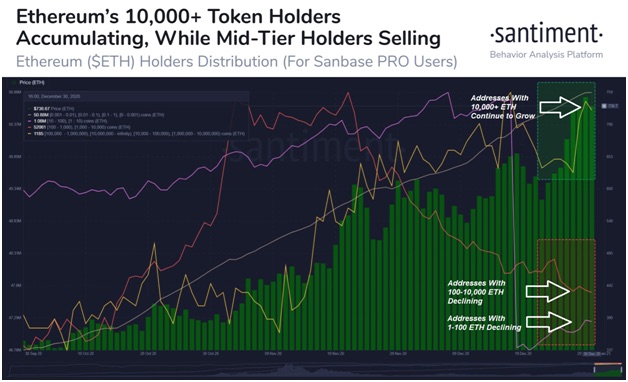 Adam Saunders, the CEO and founder of Nugget News Australia, advises that whales accumulating even as retailers sell ETH mirrors the same trend as it was for BTC at $10k—13k. For the latter, the accumulation was followed up by a price “blast off” that has seen BTC/USD hit a new all-time high above $29,000 at the time of writing.

As such, it is likely the spike in Ethereum whale activity is a fundamental factor that could translate into increased upside momentum. If the scenario unfolds as suggested, ETH/USD might see a significant bounce above the $750 region, with prices likely to go parabolic in the short term period.

The picture for ETH/USD suggests that bulls are in charge and could eye a move above $800. The outlook is likely to clear up if bulls manage to surmount the hurdle near the $760 level, which capped the recent swing and saw prices drop to lows of $728. 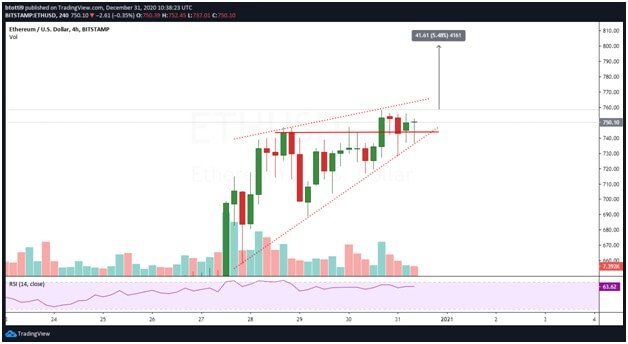 On the 4-hour chart, ETH/USD is trading within a rising wedge pattern. The time frame suggests trading has been on declining volume. Ethereum will likely hit a local top if prices break below the trendline and continue to dump.

On the upside, bulls will try to take out the resistance at $760 and seek a breakout above the wedge pattern as formed on the 4-hour chart. Breaching the barrier will present the next target as $800, from where buy-side pressure could see bulls focus on the psychological level at $1,000.

If bulls succeed in conquering resistance at the $1k level, Ethereum price could eye the all-time high of $1,432 reached in January 2018. 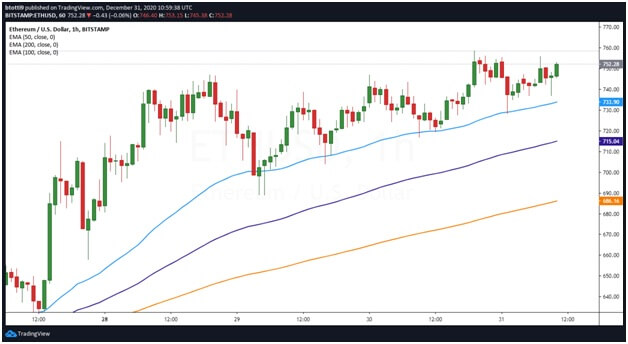 In what can be viewed as a  strategic play, the Libra crypto project has rebranded to Diem According to the…

The Financial Conduct Authority has limited authority over cryptocurrencies and other similar digital assets, according to its Chair Speaking at…