Ethereum has just climbed above a daily symmetrical triangle formed in the last 2 months. The 6% price surge on July 6 and the bullish increasing trading volume clearly shows a shift in momentum for Ethereum. 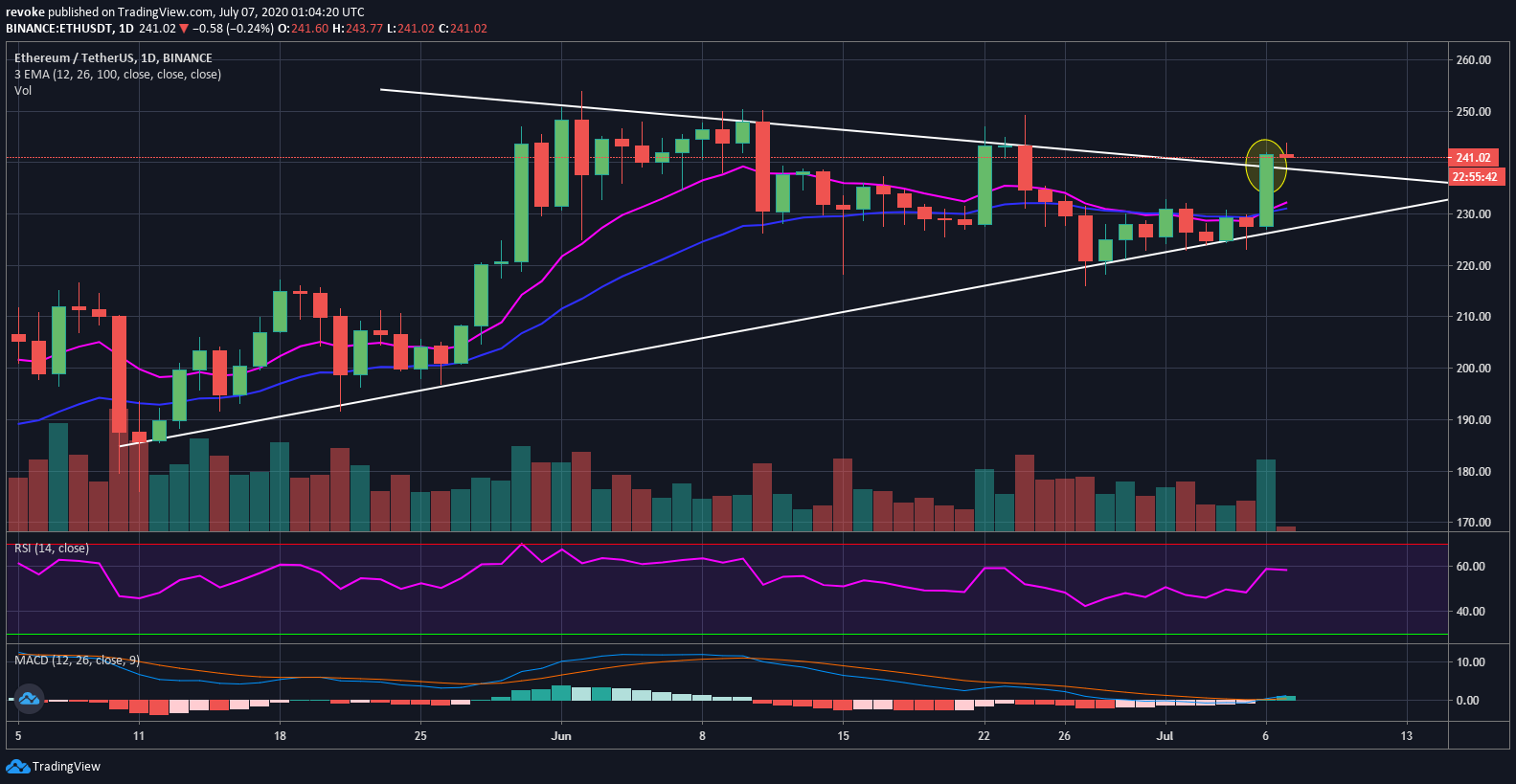 The daily RSI is not overextended yet and the MACD has just crossed bullishly again for the first time since May 28. Ethereum broke above the symmetrical triangle by more than $4 but needs to see a continuation in the next few days.

It’s obvious that Ethereum is bullish again in the short-term on both the daily and 4-hour charts. On the daily chart, the bulls have managed to see a massive breakout blasting through almost all the important resistance levels. Both EMAs have crossed bullishly again for the first time since April 8. 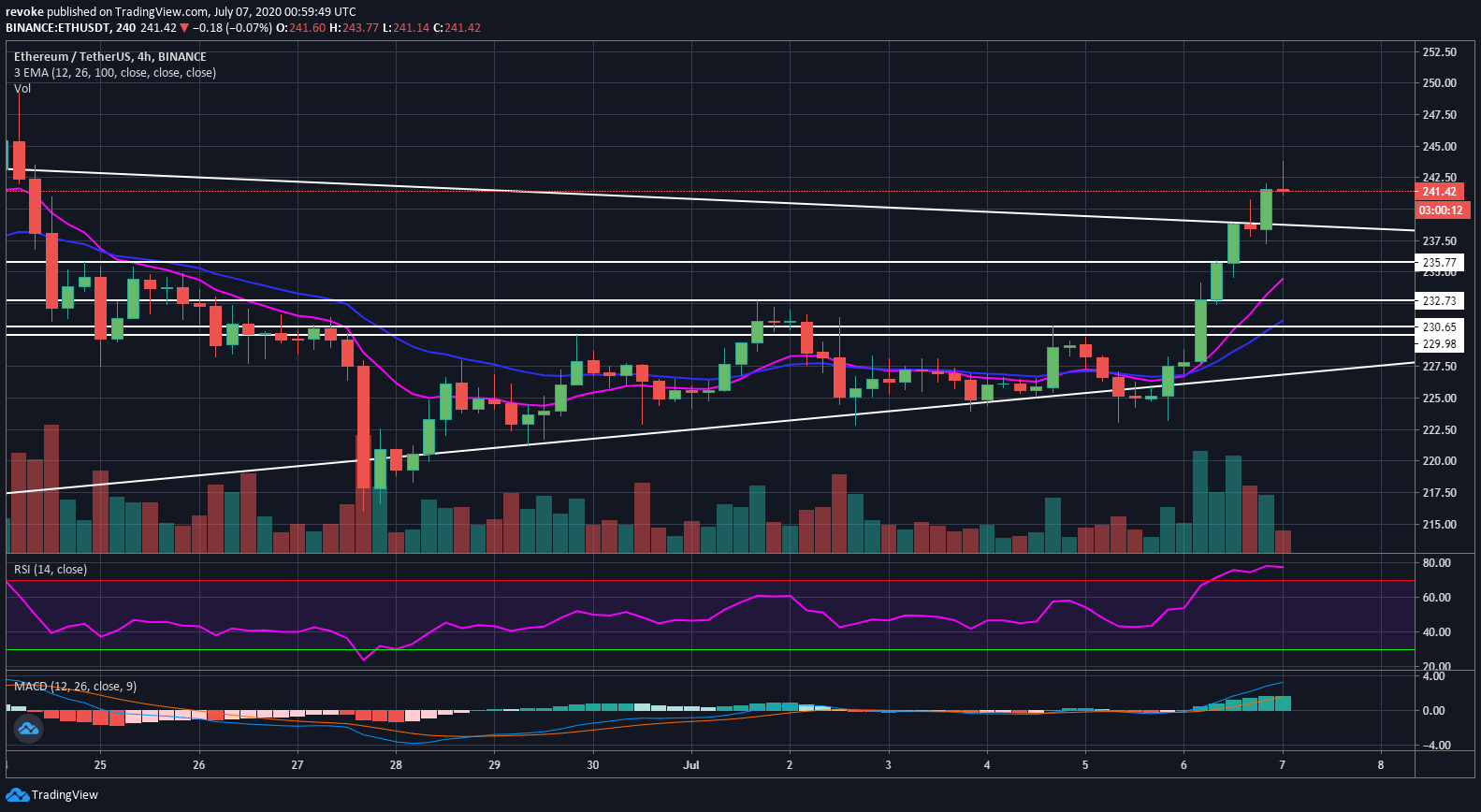 On the 4-hour chart is where we can observe the ‘health’ of the breakout. A bullish breakout needs to happen over the course of several hours with plenty of continuation and that’s exactly what we have here.

Bulls pushed Ethereum above many resistance levels with increasing bull volume. Both EMAs crossed bullishly just like the MACD. The RSI is, however, quite overextended now and we are very likely going to see a slight pullback before the next leg up.

For support, bulls can use the 12-EMA, the last resistance level at $233.50, the 26-EMA at $231.13, and even $230 psychological level. A pullback that extends lower than $230 would be considered unhealthy and potentially a reversal for the bears. 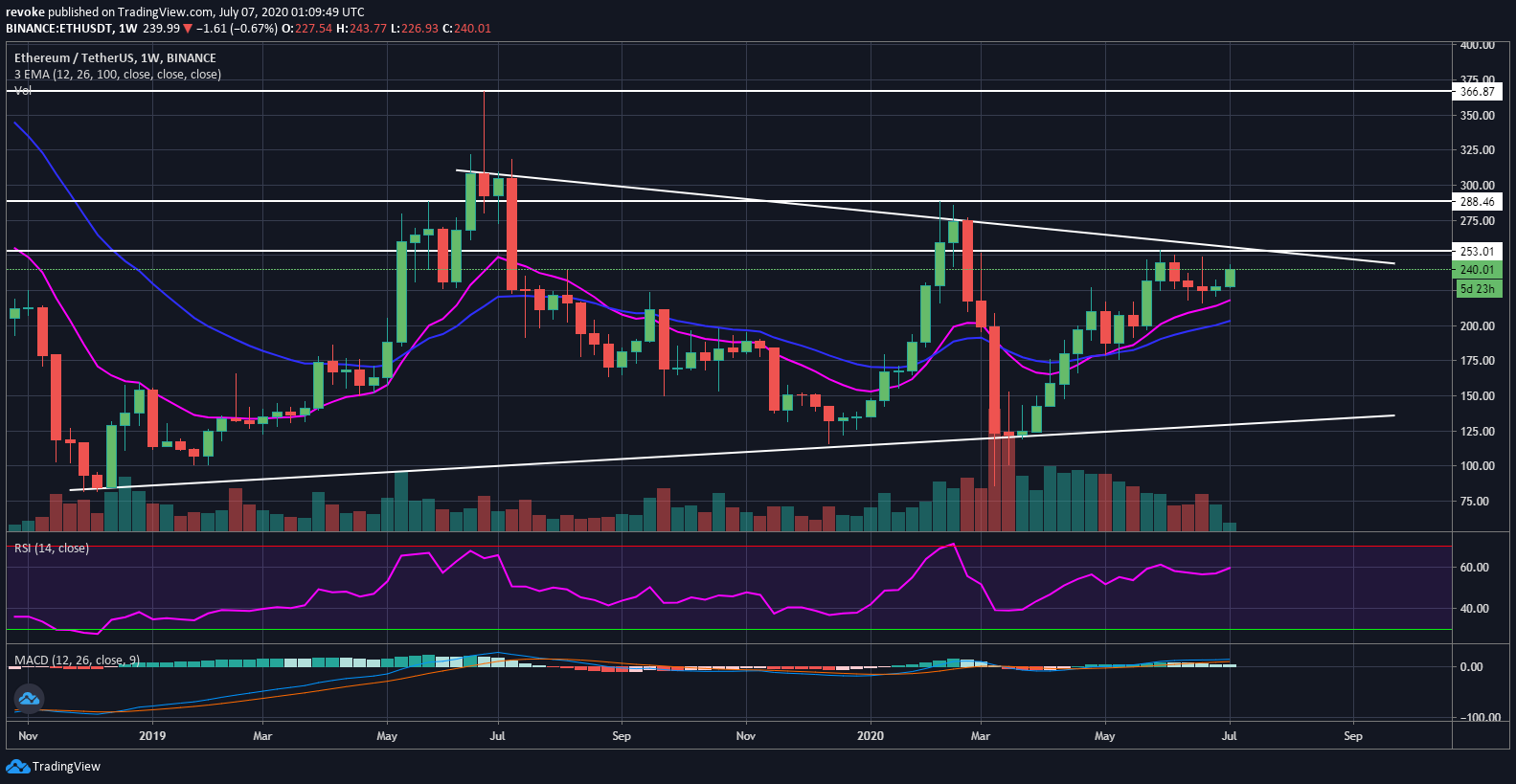 Ethereum’s long-term simply has to be bullish considering all the factors and fundamentals. Technically speaking, the weekly chart is currently in a strong uptrend with both EMAs bullishly crossed. Another important point is that Ethereum is not facing a lot of resistance. The next resistance level is established at $253.8, which is the last high followed by $288.41, basically only two major resistance points until $300.

Technical analysis aside, Ethereum 2.0 upcoming update is ultimately what makes ETH a long-term pick for many investors. Although this upgrade has been delayed several times and no one knows exactly when it’s getting deployed, it is still one of the most important updates in the history of cryptocurrencies.

ETH 2.0 intends to fundamentally change Ethereum by switching from its current PoW consensus algorithm to a PoS one. The update includes several other upgrades that should make Ethereum more scalable and simply better.

Of course, the update is a double-edged sword because more delays can easily mean investors losing interest and trust in the digital asset but at the same time, the hype can boost the price of Ethereum in anticipation of the update.

YFLink – Is This DeFi Coin The Missing Link Behind The Latest LINK Pump?

Chainlink investors have been in for a wild ride lately. In the last 3 days, the LINK price went up…

Bitcoin price falls 16% in less than 24 hours – Is this the end of the Uptrend?

Bitcoin shocked most traders and investors who decided to enter the market and hold cryptocurrencies, hoping for an extended uptrend…