Ethereum has failed to rally despite the positive sentiment that followed the launch of the ETH 2.0 upgrade. The cryptocurrency’s price has dropped from highs of $640, with support around $530. The lack of major moves on the upside for Ethereum comes after the overall crypto market hit a pause in the latest bull run after Bitcoin’s rejection near $20,000.

The short-term technical perspective for ETH/USD suggests a bearish trend. However, if the market responds with an influx of buying pressure, bulls could break higher and recoup recent losses below $640. Accumulation above this level within the coming days could allow bulls to target $700.

Ethereum’s price action over the past few days has consisted of undecided moves within a symmetrical pattern.

After breaking below $600 earlier in the week, ETH price breached the 50-SMA support wall before finding an anchor near $536. 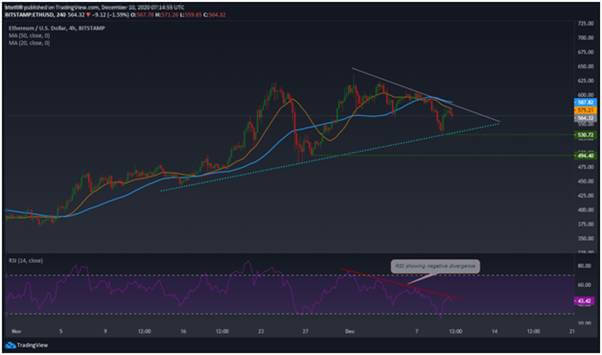 Yesterday, ETH/USD declined by 7% to touch lows of $530. Although bulls responded aggressively as shown by the series of higher green candles, their attempts failed at the 20-SMA.

The RSI indicator currently reads 43 and is showing a negative divergence to suggest bears might not be done yet. If there’s a breakdown below the triangle support, Ethereum’s price might drop to $490, with further negative action taking it to around $450.

On the upside, the 20-SMA ($575) and the 50-SMA ($587) offer resistance areas that might thwart a clear breakout above the triangle. In this case, bulls must first turn the barriers into support levels and target a higher close above $600 to flip the advantage from the bears.

On the daily chart, ETH/USD is trading just above the trendline of an ascending triangle pattern. The 20-SMA ($576) provides immediate resistance, with the price likely to continue down as suggested by the downsloping RSI. 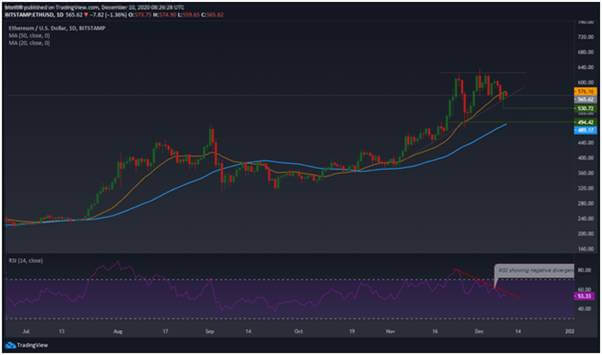 On the contrary, keeping prices above the trendline may allow bulls to push higher. If the price ticks up past the 20-SMA (immediate resistance level), the main target will be $600.

Beyond this hurdle, possibly via a few days of range-bound trading, a breakout above the horizontal resistance line could put Ethereum price above $700.

Coinbase has $20 billion in custody following a $14 billion addition