ETH/USD has retested a major overhead resistance zone near $1,350, with bulls looking to reach a new ATH

Ethereum (ETH) is inching higher after hitting a weekly high of $1,347 (on Kraken) to come closer to the major resistance line near $1,350. The last time ETH bulls rallied this high, sell-off pressure curtailed their plans around $1,352.

Although some indecision on the part of bulls has similarly seen ETH/USD easing back to lows of $1,304, it appears the current upside could add another leg. As seen on the charts below, there’s likely more conviction from a bullish perspective to suggest an imminent breakout to a new ATH.

On the other hand, sellers might yet make a move and pull ETH to support levels around $1,250.

ETH/USD has held its uptrend and currently shows strength in the $1,311—$1,350 region. The upper end of the price range provides a major resistance zone that bulls need to break above on the back of increased buy orders.

Indecision as evidenced by the appearance of a Doji candlestick on the daily chart suggests both bulls and bears were unconvinced about making firm moves.

But the daily candle so far shows bullish aggression, with the Relative Strength Index (RSI) and the rising curves of the moving averages lending credence to this perspective. 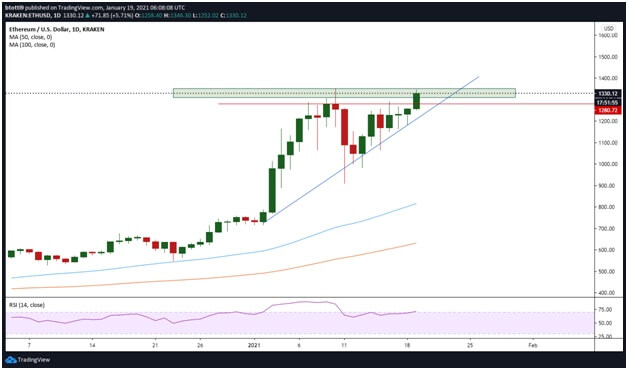 Ethereum’s price is therefore likely to see a new high above $1,432 if bulls clear overhead resistance in the area marked by a rectangle ($1,311—$1,350). An extension of the bullish momentum will likely catalyse further buying, with legitimate targets around $1,540 and $1,600 short term.

If bears reject the move, a breakdown to $1,250 could be followed by more accumulation in the $1,100—$1,200 range before bulls regroup for another upside assault. 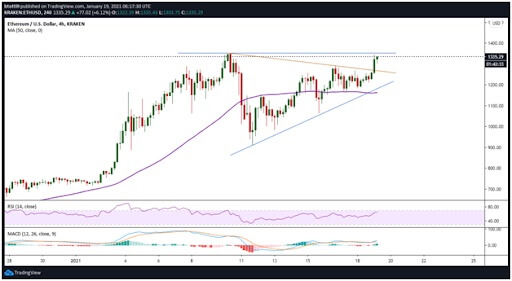 On the 4-hour chart, ETH price has eased off as overhead resistance keeps bulls within an ascending triangle pattern.

Buyers, however, remain in the market, as suggested by the upsloping RSI. The technical indicator that gauges market strength is yet to hit overbought conditions, suggesting that buyers have the advantage.

The MACD is also showing bullish strength as it flips positive.

In this case, ETH/USD is likely to remain in an uptrend unless bearish aggression pushes prices to the declining trendline near $1,250. But this level marks an extension of the ascending triangle’s support line, meaning that bulls will likely still be in control.

However, a breakdown to the 50-SMA support level at $1,163 risks emboldening sellers. If this happens, an increase in short orders could push prices to the horizontal support line at $1,065 short term.

The post Ethereum poised for a breakout as bulls seek convincing break near $1,350 appeared first on Coin Journal.