The intraday high was Enjin Coin’s highest price level since January 2018 and just inches away from its all-time high reached in January that year. Although profit booking saw ENJ/USD retrace below $0.40, bulls have since rallied to settle above $0.41.

Interest in the Ethereum-based token has skyrocketed, with buying pressure likely to result in another leg up for the ERC-20 token.

Market data from CoinMarketCap shows that trading volume is up by more than 450% in the past 24 hours, with over $1 billion worth of ENJ traded. Market capitalisation has also increased 48% to $331 million at the time of writing, with Enjin Coin currently ranked as the 75th largest cryptocurrency by market cap.

According to data provided by Japan’s Financial Services Agency (FSA), ENJ is now the first gaming token to receive regulatory approval that allows listing on any of the country’s cryptocurrency exchanges.

“After 1.5 years of due diligence, we are thrilled to announce Enjin Coin $ENJ has been approved by the JVCEA and will be listed on @coincheckjp, making it the 1st gaming token authorised for use in Japan“, Enjin Coin tweeted.

ENJ/USD is set to trade higher after slowing down to change hands at intraday lows of $0.337. Bulls have rallied over the past few hours and are currently strengthening above $0.41.

The daily chart has the Relative Strength Index (RSI) in overbought territory but it’s not overextended. The MACD indicator is also bullish with no signs of slowing down to suggest the path upwards is where the momentum is currently. 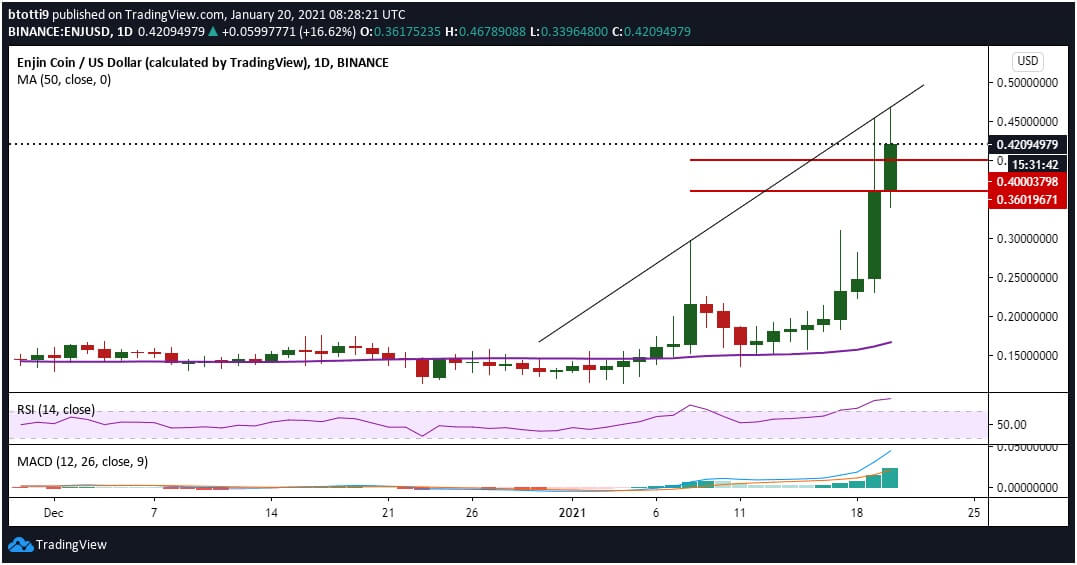 If buy-side pressure adds another leg towards intraday highs ($0.467), fresh momentum above this price level will take ENJ/USD past its all-time high of $0.493 reached on 07 January 2018. To achieve this goal, bulls need a daily close above $0.40. A higher-high that confirms the appearance of a rising trendline barrier (towards $0.50) will highlight bulls’ desire for more gains.

On the downside, two horizontal support lines provide supply reload zones that might interest the bears. These are the $0.40 major support zone and $0.367, which is ENJ/USD’s 24-hour intraday low level.

Jihan Wu gains the upper hand in the battle for Bitmain

Amber Group raises $100 M in series B funding round