Decred price rallied to highs of $42 after surging more than 50% in 24 hours. Although the token has since bounced off the highs, broader crypto market sentiment and a confluence of technical indicators suggest bulls could still push higher in the short term.

At the time of writing, DCR price is around $33, which puts it 38% and 57% up against the US dollar in the past 24 hours and seven days respectively.

According to on-chain data provider Santiment, DCR price touched a 13-month price level, the surge coming amid a spike in trading volume. It also follows Decred co-founder and project lead Jake Yocom-Piatt’s appearance on Nasdaq’s TradeTalks where the discussion focused on blockchain and its potential use in elections.

According to one analyst, Decred’s upsurge followed a confluence of bullish technical indicators formed over the past few days. The DCR bull forecast buying pressure would drive prices higher based on the token’s realised price, Market-Value-to-Realized-Value (MVRV) Ratio and Mayer Multiple.

The analyst tweeted just before the spike:

“Decred is breaking out again. Quick overview of some charts and potential short term targets. Now firmly above the realised price. This is a bull market folks. MVRV upper band with 20% probability of mean reversion is $34 and trending higher. Mayer multiple 5% prob is $42. Ye Olde Stock-Te-Flow model calls for around $44”.

On the daily chart, the RSI and MACD indicators suggest bulls are in command and a higher candle close would provide the base for another leg up.

Currently, bulls are looking to keep prices above $30 to retain the upper hand. Action in the past few hours has seen buyers battle strong resistance at the 50% Fibonacci retracement level ($33.94).

Above this level, bulls will need to breach the demand wall at $35.64 (61.8% Fib level) to open up a path to a higher daily close. From here, bulls can target a retest of intraday highs near $42. 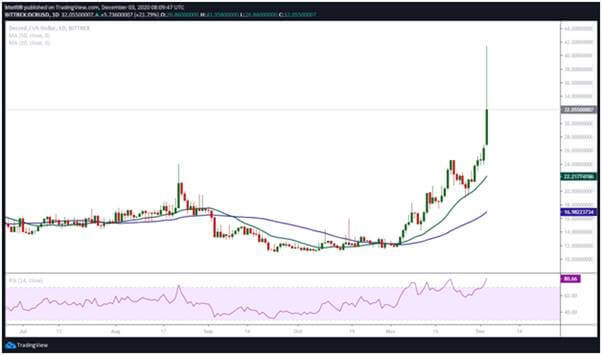 On the downside, the daily chart suggests a dip to the upper trendline of a parallel ascending channel that has restricted action since 13 November.

The post Decred bounces off $42 after spiking 50% appeared first on Coin Journal.

FIL/USD price quickly doubled as Filecoin finally launched its mainnet, but  showed weakness of around $60 afterwards The price of…