CRV/USD jumped above $2.0 for the first time since September 2020

Curve Dao Token (CRV) has been soaring lately and posted another big jump to retain the upward trend that has seen it trade higher since 24 December 2020.

In the past 24 hours, the CRV token has soared by more than 36% to hit highs of $2.11. Bulls have rebounded from lows of $1.70 after they retreated beneath $2.00 amid widespread crypto bleeding. The early trading sessions on Friday had seen BTC dump under $30k, while ETH bulls stayed strong to prevent a dip below $1,100. Most other cryptocurrencies traded lower.

Curve Dao Token defied the downside pressure to remain above a parabolic curve line. CRV bulls would have likely used the slight sell-off witnessed to replenish their buying power.

Curve Dao’s parabolic upside and break above $2.00 invited sell-off pressure from profit-booking, which saw CRV/USD drop to lows of $1.70.

The formation of a Doji candlestick during the previous session (as seen on the daily chart) is a testament to the battle for control between bulls and bears. But the long lower wick on today’s candlestick suggests bulls have been aggressive on the dip. 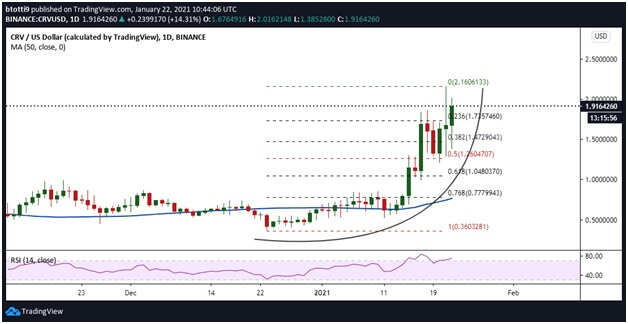 From a technical perspective, the RSI is rising and looking to break into overbought territory. This indicates that bulls have the upper hand and a break towards $2.2 could open up the path to $2.5 and higher.

The 4-hour chart also suggests a positive continuation after a breakout of a bullish flag pattern. Bulls need to clear the barrier bears have set at $2.17 to move higher. Breaching this overhead resistance zone will allow bulls to target $2.50 and $3.00. 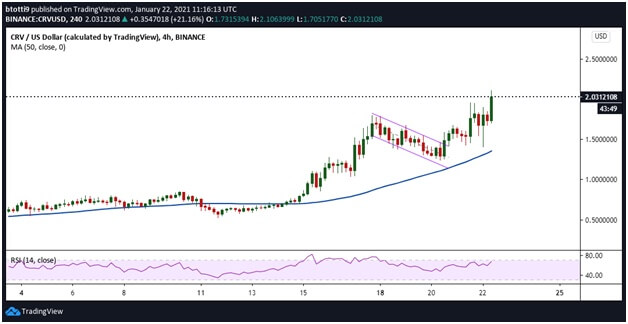 The 50-SMA ($1.35) on the 4-hour chart offers a robust cushion in between the Fib levels. The daily log has the 50-SMA nestled at $0.76, which provides a formidable support zone should bears manage to breach the psychological $1.00 level.

2020 was a stellar year for cryptocurrencies, especially Bitcoin. With the digital asset’s price quadrupling over the year, many speculators…