After a few weeks packed with news, as well as the sharp increase in Bitcoin’s price, this week was relatively quiet as the BTC rally appeared to calm down a bit. As usual, Bitcoin’s price has a strong impact on the market of the Alternative coins, which have also marked gains against the US dollar as the volume increased so notably that people started talking about the end of the crypto winter.

The one question that lingers in the background is where do we go from here and whether the rally will continue to shape Bitcoin’s parabolic graph or weather this is just a bullish trap. At this stage, it remains difficult to outline what the future holds. What can be said, however, is that the market wasn’t moved by the sell-offs of the past week and despite the rapid decline, Bitcoin’s price managed to hold and returned to the levels of around $8,000.

As it’s well-known, Bitcoin’s pattern of behavior is also dragging the altcoins that are recovering after a tough period. Their declines appear halted for the time being and the price of most altcoins has also increased. Moreover, we saw new all-time highs (ATH) being established against the dollar in certain cases: A good example of this will be Binance Coin (BNB), which continues to surge, crosses the $30 threshold.

The IEO phenomenon persists. Despite all of the assumptions that the hype around IEOs will fade and despite the warning which came from SEC executives, it seems that the hype continues. Furthermore, after Binance recovered from the $40 million Bitcoin hack, the price of some tokens issued on the exchange continues to rise significantly. FET and CELR increased by more than 20 percent while Matic saw a spike of 110 percent. If this trend continues, it’s expected to see more investors joining in. It’s also possible that some of the investors will realize their success and spread the risk between different altcoins. Thus, this could pour more fuel and potentially trigger yet another official Altcoin season.

Summing up this week, we can say that regardless of the containment, the market is still on the rise and the strengthening seen in recent weeks will support it later on. In the near term, we expect that the market volatility will continue and if you are new to the cryptocurrency market, remember that you should never FOMO in before you have learned enough. 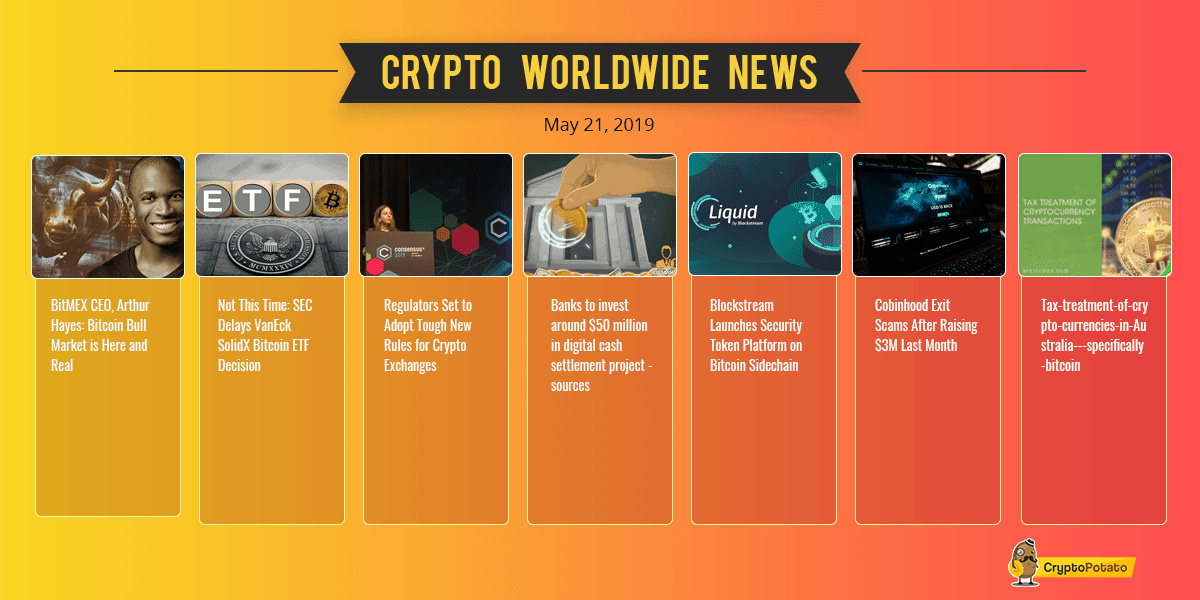 BitMEX CEO, Arthur Hayes: Bitcoin Bull Market is Here and Real. The CEO of BitMEX has once again reaffirmed that the bull market is real. One of the reasons for this, according to him, is the fact that Bitcoin managed to recover from the sharp decrease to $7,000 in just a couple of days.

Not This Time: SEC Delays VanEck SolidX Bitcoin ETF Decision. Perhaps somehow expectedly, the US SEC has once again delayed its approval of the VanEck SolidX Bitcoin exchange-traded fund (ETF). The Commission is looking for comments on behalf of interested parties on the need of the proposed rule change.

Banks to Invest Around $50 Million in Digital Cash Settlement Project: Sources. Some of the world’s largest banks are reportedly in the process of investing $50 million in order to create a digital cash settlement system based on blockchain technology.

Blockstream Launches Security Token Platform on Bitcoin Sidechain. Popular Bitcoin startup Blockstream is launching its own platform which will allow users to launch tokens based on Bitcoin’s sidechain, Liquid. It will also enable users to manage security tokens.

Cobinhood Exit Scams After Raising $3M Last Month. Cobinhood and the associated DEXON Foundation have pulled an exit scam after raising $3 million last month. After unlocking the DEXON Coin (DXN), it went on to dump it on the market, causing its value to massively plunge in price, leaving investors in the dust.

Bitcoin’s price has been a hot topic over the past several days with the return of price exuberance. Bitcoin expert,…

Ethereum has broken $600 for the first time in two years peaking at $607 on Coinbase. The digital asset has…