It is the same picture across the rest of cryptocurrency, as prices slip on increased selling pressure. A similar scenario is seen in the stock market after US President Donald Trump confirmed via Twitter that he and First Lady Melania Trump have tested positive for COVID-19. 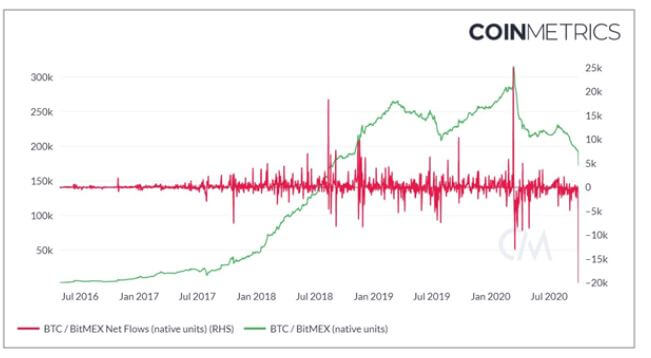 US stock futures as well as the Treasury yields fell as the largely knee-jerk reaction from traders kicked in.

Across the altcoin market, crypto assets are mirroring Bitcoin’s blandness, with Ethereum dropping more than 6% to trade around $343.

XRP has shed 4% of its value in the past 24 hours and is changing hands at around $0.232, while Bitcoin Cash, Binance Coin, Polkadot, ChainLink, Crypto.com Coin, and Litecoin are all down between 3%-10.6% to see all top 10 cryptocurrencies slumped in red.

ChainLink (LINK) with -10.64% and Polkadot (DOT) with -9.11% as of writing are the biggest losers among the top 10. Cardano (ADA) with -9.59% and Bitcoin SV (BSV) with -9.68% have also faced increased selling pressure and could decline double digits if the sell-off continues.

On Thursday, October 1, US regulators filed charges against crypto exchange BitMEX and its founders, a development that had an immediate impact on price. Trades also reacted by withdrawing huge amounts from the exchange

According to CoinMetrics, customers have withdrawn around 20.9K bitcoins from BitMEX since the indictment news. It is the highest number of coins withdrawn from the exchange, the analytics firm added.

Bitcoin is down by 3.65% to trade around $10,465. However, despite BTC/USD remaining poised above $10,450 as of writing, the likely dip in prices across the stock markets could make any bullish attempts to bounce above $10,600 even more difficult.

The post Crypto prices down as Trump announces he tested positive for COVID-19 appeared first on Coin Journal.

SEC chairman resigns three and half years after taking office

Jay Clayton, the Chairman of the Securities and Exchange Commission (SEC), has officially stepped down from office Clayton’s departure was…