Now its official, the bear market we’ve experienced in the past year is the longest that the crypto market ever knew in its short history. Despite the relative stability we see since the beginning of 2019, around $3500, we need to remember that Bitcoin tends to be volatile and unpredictable and we had already seen such stability around $6,500 just three months ago. Since then, the price has been cut by almost 50%.

In the alternative cryptocurrencies market or Altcoins, the charts are starting to change in direction, while the trend reversal we reported on our previous updates is taking place following the hype around cryptocurrencies based on Mimblewimble protocol. This together with the crowd sales which on Binance Launchpad platform: the past week BitTorrent (BTT), rose 10x, a rare figure that reminded crypto traders of the happy days in 2017.

Binance token (BNB) is affected by the latest fundraising of BTT, and traders are starting to understand the potential of holding it.

Also, we have witnessed other Altcoins that have risen sharply during the past week, this is just another sign of the market’s awakening, even though this may be a bullish trap or a dead-cat bounce.

The ETF is again on the main stage of the crypto news. However, the market is no longer excited about it. After CBOE’s decision to withdraw the ETF application, it has been reported that the application was resubmitted. Judging by the price of the Bitcoin, no one seems to be enthusiastic or expecting any approval soon.

The trading volume is low but stable, while Bitcoin dominance is 53.4% ​​in favor of Bitcoin. 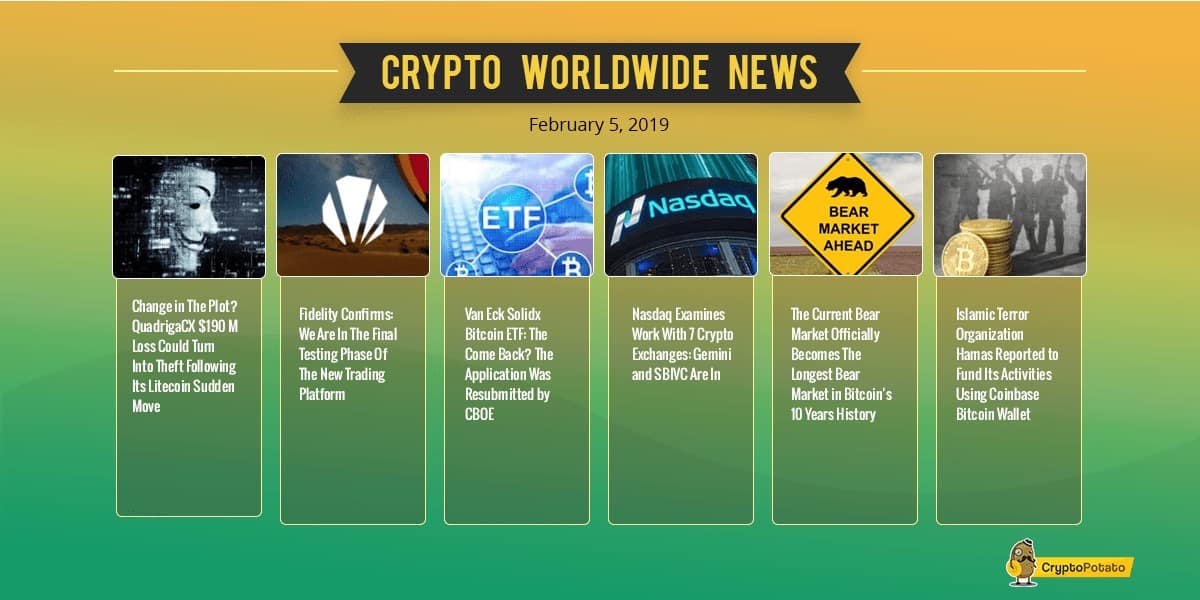 Change in The Plot? QuadrigaCX $190 M Loss Could Turn Into Theft Following Its Litecoin Sudden Move. Barely two months after the death of Gerald Cotten, founder of QuadrigaCX exchange, 250 million CAD has mysteriously been divided into 180 CAD worth of crypto and 70 million CAD fiat.

Fidelity Confirms: We Are In The Final Testing Phase Of The New Trading Platform. The Boston-based investment firm has announced that its new crypto trading platform for institutional investors is in its final testing phase.

Van Eck Solidx Bitcoin ETF: The Come-Back? CBOE resubmitted the Application. After shockingly withdrawing its Bitcoin ETF proposal during the US government shutdown, CBOE confirms it has resubmitted its application to the US SEC.

Nasdaq Examines Work With 7 Crypto Exchanges: Gemini and SBIVC Are In. Nasdaq has organized a test for some cryptocurrency exchanges, including Gemini to determine if they are worthy of a collaboration with the tech-heavy stock exchange.

The Current Bear Market Officially Becomes The Longest Bear Market in Bitcoin’s 10 Years History. The price charts at the end of January 2019 indicates that the current bearish run is the longest in the history of bitcoin. How long until it ends?

Islamic Terror Organization Hamas Reported to Fund Its Activities Using Coinbase Bitcoin Wallet. After finding it difficult to fund their cause through other traditional methods, the leader of the organization resorted to accepting bitcoin donations from its members through a Coinbase wallet.

The cryptocurrency market witnessed a sudden crash in prices last week. Many investors were afraid that an upcoming crash is…

According to a recent report, the New York Digital Investment Group (NYDIG) has sold nearly $140 million in a little-known…