After a few sleepy weeks, we got some action, with an upward correction for Bitcoin and other crypto’s like Litecoin (LTC) which rose 30%. Although the general excitement is still cautious, those who follow the market regularly are beginning to notice a halt in the downward trend, possibly even the beginning of a change in trend. The hype that began around new currencies like Grin continued through Bittorrent with the Binance Launchpad and continued with Litecoin cooperation with Beam. At the moment it is impossible to draw substantive conclusions from these trends. However, it is clear that there are those who look at the market with their finger on the trigger and are willing to take risks out of a belief in renewed growth.

The Alternative crypto market experienced a positive week, and many alts that were painted green and were affected by Bitcoin dominance dropped slightly to the 52% area. However, it is still too early to point at a clear change in direction, and a further decline in the price of Bitcoin is expected to spoil plans for another alt celebration in the near future. Meanwhile, arrangements for the celebrations are continuing, BNB continues to soar, Bittrex has added Grin for trading, and the market is preparing itself for every scenario.

In the meantime, while we are talking about alts, the Lightning Network continues to gain momentum and interest. The founder and CEO of Twitter, Jack Dorsey, who is known to be an enthusiastic Bitcoin supporter, referred to the Lightning Network this week suggesting that it is only a matter of time until it gains massive adoption. With this mindset, Dorsey decided to implement Bitcoin’s Lightning Network into his Payment App, Square’s Cash, one of the most popular mobile Payment apps in the world.

After rumors that Brooke Pierce, EOS founder, plans to revive MT.Gox, many questions arose about the motivation behind the move when there are disputes over Pierce’s status as the legal owner of the exchange.

At the time of writing, the Crypto market cap is $120 billion. 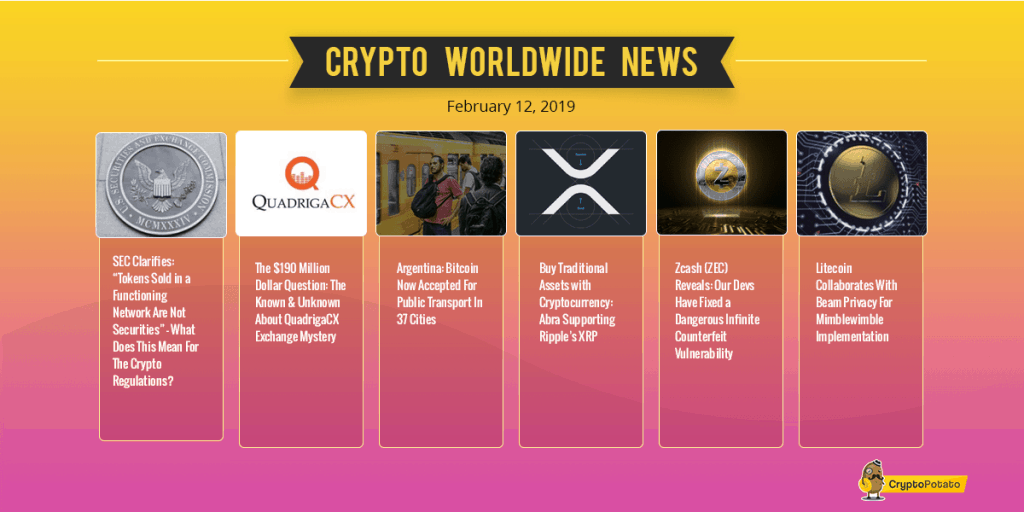 SEC Clarifies: “Tokens Sold in a Functioning Network Are Not Securities” – What Does This Mean For The Crypto Regulations? US SEC commissioner, Hester Peirce recently published a transcript of her speech stating that not all crypto tokens are securities, depending on the environment and circumstance in which they are sold.

The $190 Million Dollar Question: The Known & Unknown About QuadrigaCX Exchange Mystery. Still on the mysterious case of the QuadrigaCX Exchange, the locked funds are still inaccessible, and members of the crypto community continue to wonder if it was an unfortunate death or a well-planned exit scam.

Argentina: Bitcoin Now Accepted For Public Transport In 37 Cities. The Latin American country became the latest to integrate Bitcoin as a payment option for public transport users across 37 locations.

Buy Traditional Assets with Cryptocurrency: Abra Supporting Ripple’s XRP. The second largest cryptocurrency by market cap just hit a new milestone and is set for global adoption after Abra, an all-in-one cryptocurrency wallet, and exchange app announced that investors can now buy US stock with XRP.

Zcash (ZEC) Reveals: Our Devs Have Fixed a Dangerous Infinite Counterfeit Vulnerability. After discovering a vulnerability which would allow hackers to create fake Zcash coins in March 2018, Zcash has officially stated that its developers corrected the error three months ago.

Litecoin Collaborates With Beam Privacy For Mimblewimble Implementation. An implementation of Mimblewimble as extension blocks into Litecoin’s first layer will allow users to convert their LTC to LTC-MW and vice versa.

This week we have chart analysis of Bitcoin, Ethereum, Ripple, DASH and Monero – Read more here.

Ethereum is showing strength against the USD, increasing by 6 percent in the past 24 hours and it’s currently trading…

Elrond (ERD) gained about 25% against the US dollar over the last 24 hours. The bullish momentum follows the announcement…