ChainLink continues outperforming the market after another massive breakout towards $17. LINK bulls seem to have no limit as the digital asset is getting close to a $6 billion market capitalization. This recent leg up came with a significant increase in trading volume from an average of $700 million to almost $3 billion.

Obviously, many indicators are extremely overextended on many time frames, however, FOMO is currently pushing LINK price to insane levels. This surge has put the market cap of DeFi projects to an all-time high of $13 billion.

Looking at the daily chart, ChainLink is currently in a robust uptrend but bulls need some consolidation before the next leg up. The RSI is heavily overextended while the MACD has remained bullish for the most part. 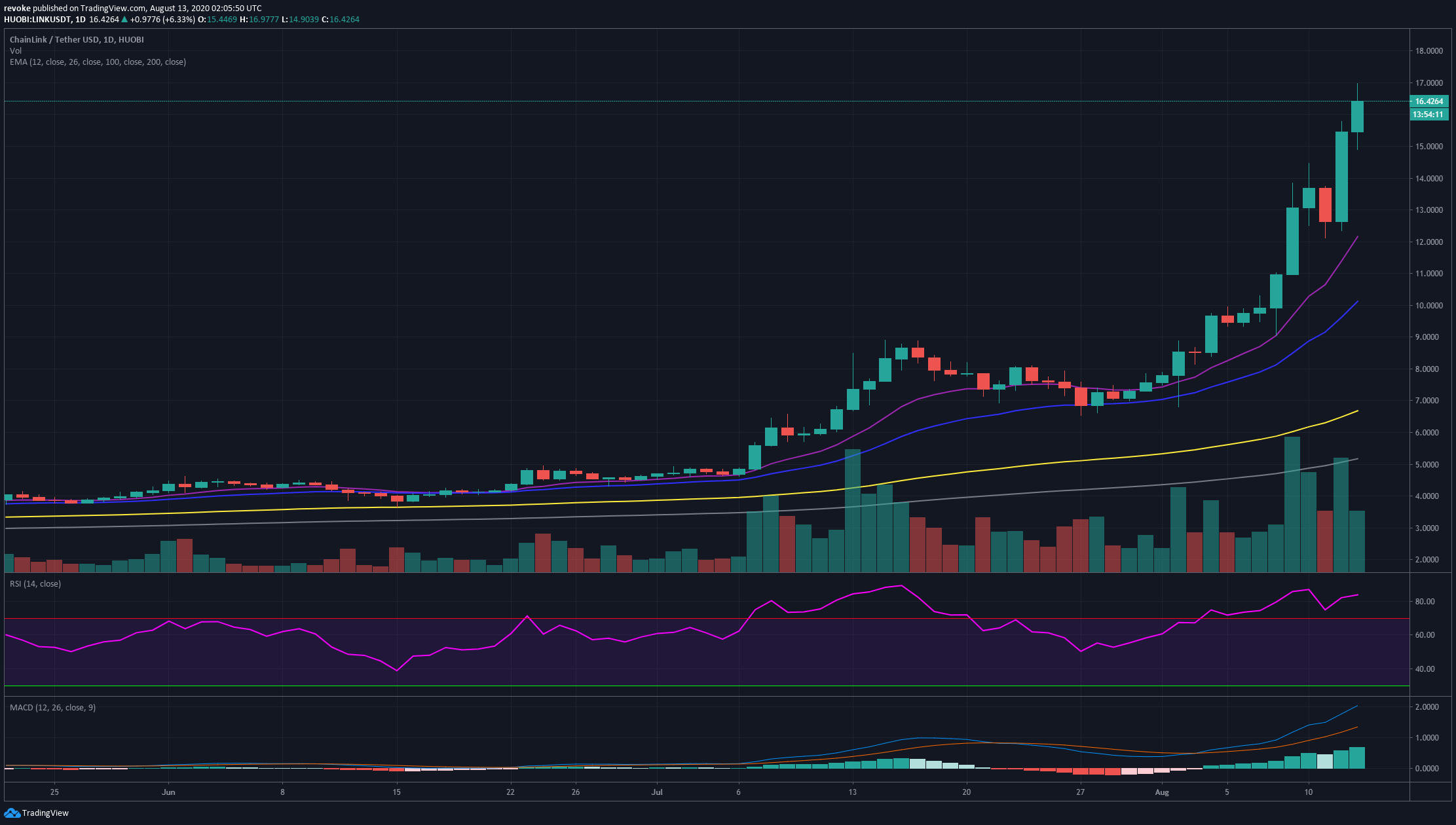 ChainLink price has bounced several times from the daily 12-EMA which seems to be a strong support level. Since June 15, bulls have been able to defend the 26-EMA. Currently, anything above $12 will be a higher low and a continuation of the uptrend.

As this is the all-time high for LINK price, it’s hard to determine where the next real resistance level is at, however, we should probably assume that ChainLink will at least see 1-2 days of consolidation before another leg up.

A company named Zeus Capital has recently released a document where it states that ChainLink will eventually go to zero dollars. The company, allegedly a fake company, seems to have put its money where its mouth is by actually shorting a massive number of LINK tokens, 753k to be precise.

Unfortunately, the short didn’t work out very well as it’s already fully liquidated because of the recent surge. Making this massive short public was certainly not a good idea, however, some people actually believe that Zeus Capital might even be long on LINK through another account.

ChainLink price hit $12.8 which was enough to liquidate the entire position of Zeus Capital, however, this was only the public short. It’s still unclear who is behind Zeus Capital, Nexo Finance has been accused of being behind the suspicious platform.

Clearly, the weekly chart is extremely bullish but the RSI is currently at 91.6 points, massively overextended. This isn’t the first time the RSI is overbought, back in June 2019, it also hit 95 points. 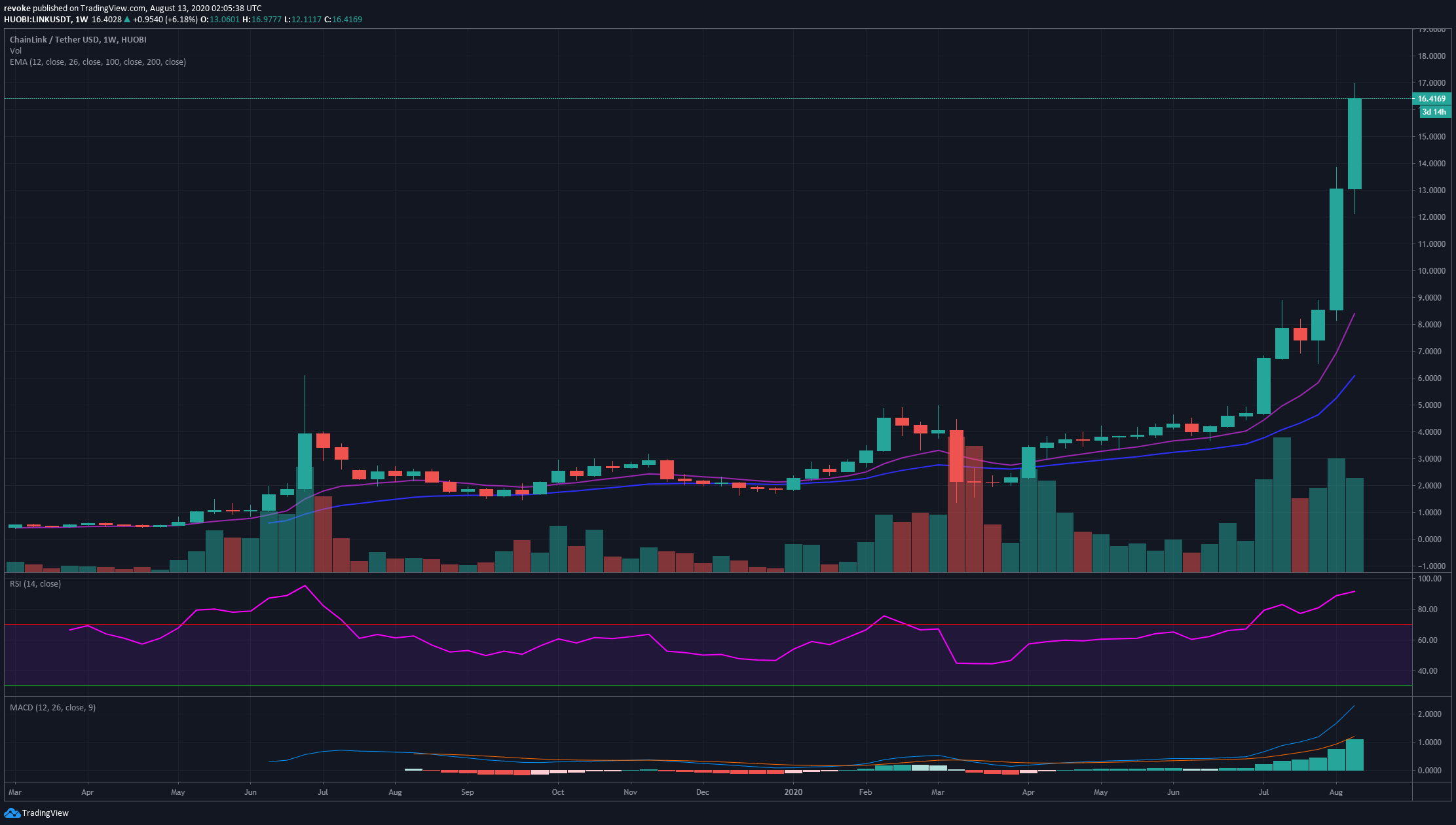 The most metric for the long-term is the notable increase in trading volume while in a bull rally, this usually means the rally is robust. Just in the last two weeks, LINK price is up by more than 100%, outperforming many altcoins, and going from a 0.3% market dominance to a current peak of 1.3%.

ChainLink is now above Bitcoin Cash in terms of market cap and it’s eying up Tether and XRP, both above $10 billion.

Cardano Founder Challenged By Polymarket To Bet On His Project, Will He Commit?

In a genius marketing move, Polymarket – an Ethereum blockchain based prediction platform made a bet to the Cardano founder…

Sotheby’s “Source Code For The WWW” NFT Worth $5.4M Might Have Been Inauthentic

Sotheby’s managed to sell Sir Tim-Berners Lee masterpiece “Source Code For The WWW” NFT for around $5.4 million on June…