Once again, after already hitting $17, ChainLink is back almost hitting a crucial mark at $20. The digital asset is by far the best performing altcoin in the top 10 absolutely destroying even Ethereum when it comes to gains. ChainLink price is still currently around $19 as it seems that bearish moves are almost non-existent. The daily chart is obviously overextended, however, the moves up are quite healthy. 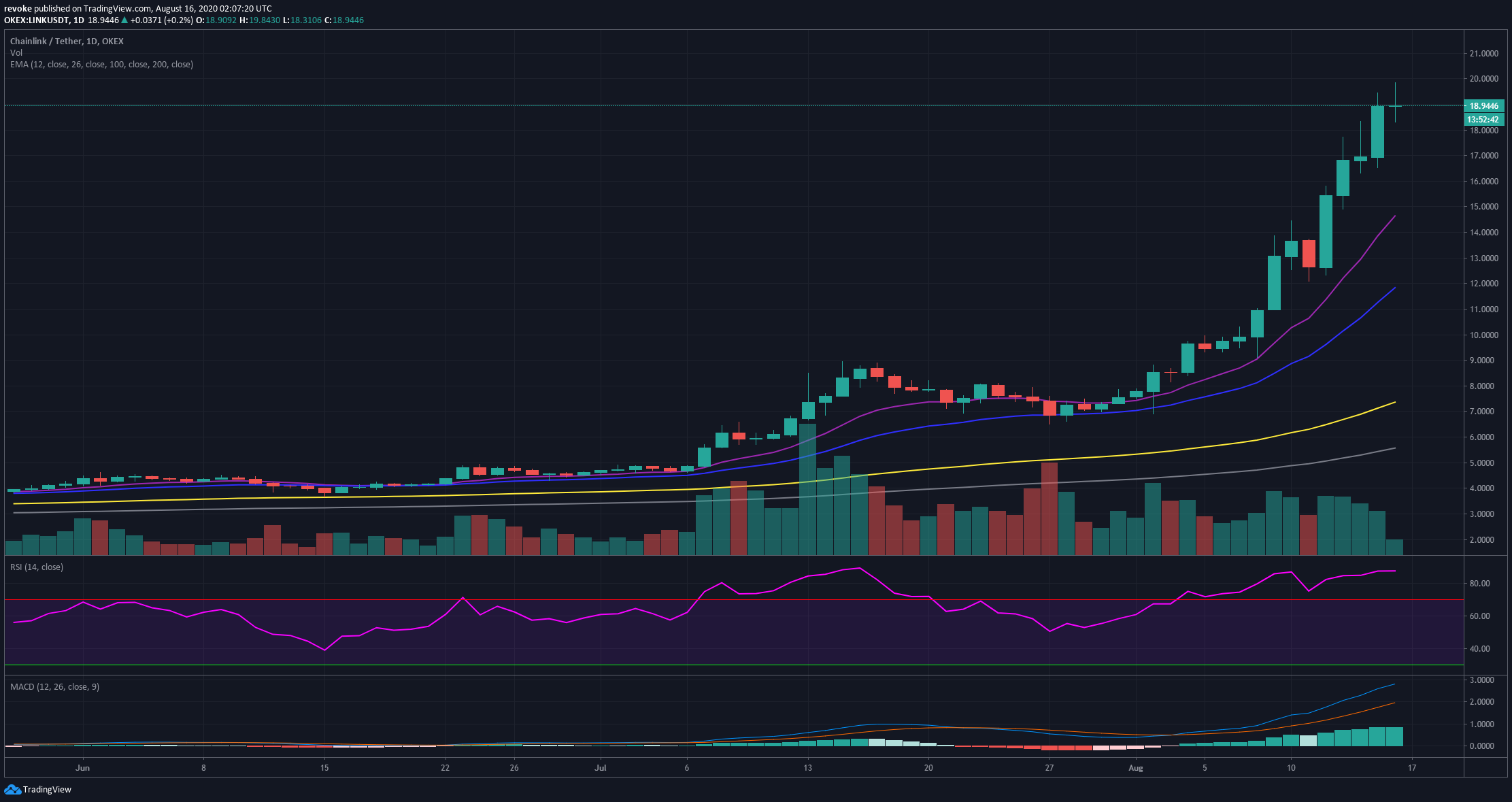 Each leg up is followed by a short period of consolidation before the next leg up. The daily RSI has been in the overbought zone for almost two weeks but clearly investors don’t care. The trading volume of ChainLink increased significantly on August 13 and dropped a few days later but it’s picking up speed again. The current market capitalization of ChainLink is $6.6 billion, closer than ever to Tether at $10 billion.

Is There a Limit For ChainLink Price?

While this is the highest price LINK has ever had, we can still compare it to other cryptocurrencies when they had their own peaks. Not to go any further, Bitcoin Cash, which is currently below ChainLink, managed to reach a $56 billion market capitalization. Even Litecoin got a $20 billion mcap back in December 2017. Obviously this happened during the biggest crypto bull run, but we might not be far away from another one. Either way, the current $6.6 billion mcap of LINK is clearly not that ‘high’ considering other altcoins have been able to achieve mcaps significantly higher.

Clearly a lot of new and existing projects are looking into the Oracle technology offered by ChainLink. The digital asset and platform had numerous big partnerships in 2019 and 2020 but this bull rally is not just about fundamentals but also FOMO.

Like any other bull rally, people are buying into LINK expecting to make quick profits. This, in the long run, is not healthy but at the same time, there is a chance for ChainLink to stabilize and never actually crash.

At first glance, the weekly chart looks extremely good for ChainLink. Bulls are trading above both EMA’s which are crossed bullishly and they are seeing an increase in trading volume. The RSI is overextended but as we already know, this indicator can be notably deceiving when an asset is in a bull or bear market. 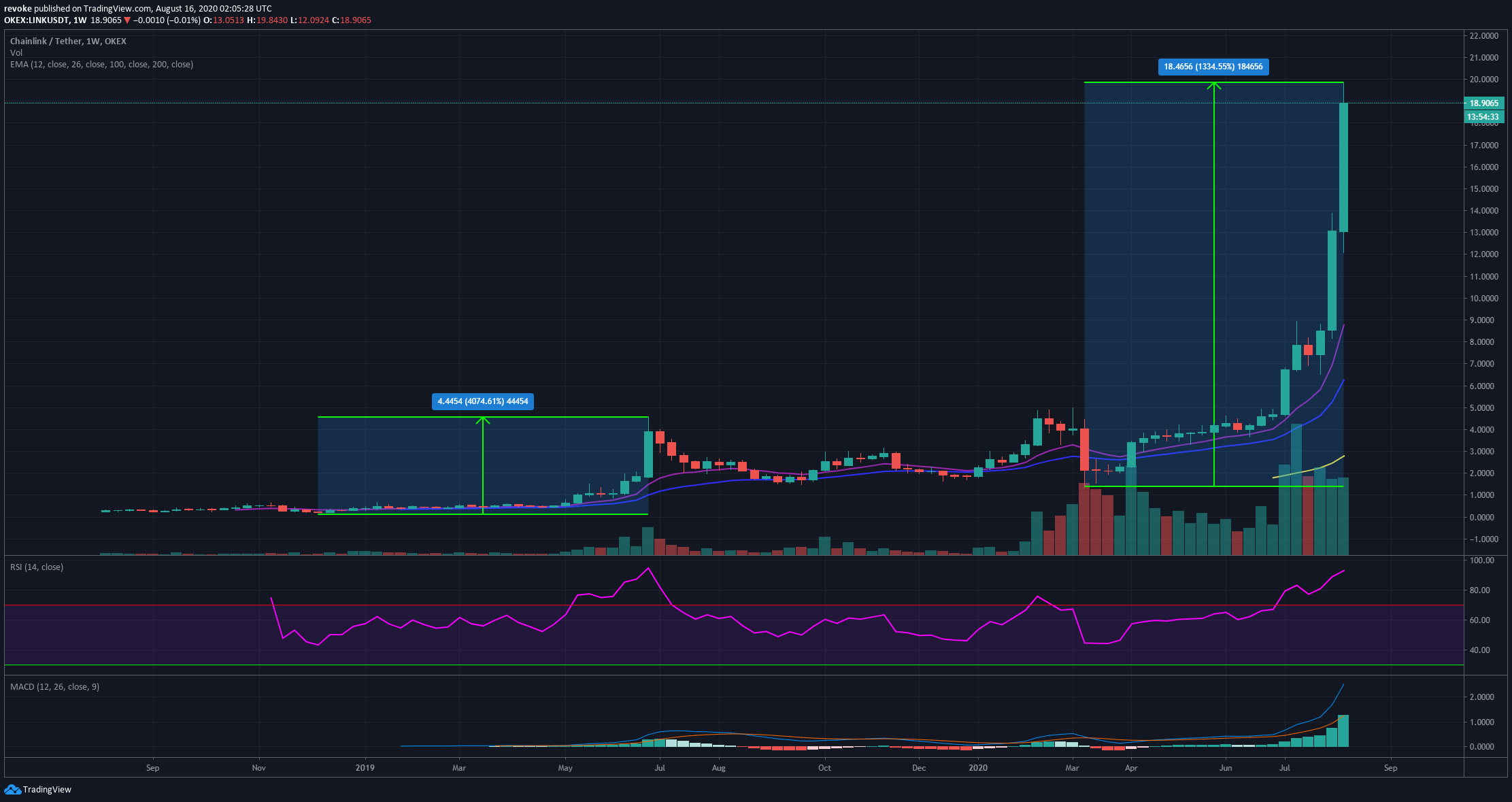 The first major bull rally of ChainLink happened in April 2019 where the digital asset did something quite similar going from $0.2 to a high of $4.59 in a few months. Eventually, LINK crashed down to $1.5 establishing a strong bottom from which it bounced several times.

Eventually, after the crash of March that also found support at around $1.5 LINK bounced as high as ever hitting a new all-time high.

Ethereum 2.0 – All You Need To Know About Staking ETH

Ethereum Price Could Be The First to Rebound, Aiming For $400

Ethereum has been quite clearly the leader during the recent bull rally, ignoring some of the new DeFi projects. Looking…