The Celo governance token jumped 80% to $3.74 after the top crypto exchange listed it for trading

Celo (CELO) price shot to highs of $3.74 on Tuesday, going vertical by more than 80% on the day to see it break above a multi-month resistance line.

At the time of writing, CELO is changing hands around $2.72, with profit booking likely to provide short term downward pressure. The price of the utility token could well struggle to remain above $2.50, with a dip to recent lows of $1.35 likely.

Celo’s sharp burst up the charts followed a listing by Binance, the world’s largest cryptocurrency exchange by trading volume. It increases the token’s overall visibility and liquidity, with CELO now available on three major platforms—Binance, OKEx and Coinbase Pro. 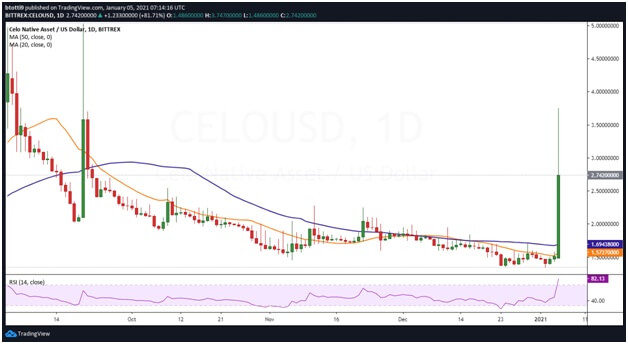 The daily chart features a long upper wick candlestick to suggest the upside was driven by strong momentum. However, although the long wick indicates that bulls dominated during the early Asian trading session, they are unlikely to sustain the trend going into later sessions.

In technical analysis, such an extended wick above the candle’s body suggests possible trend reversal. In this case, prices are likely to move down rather than up.

The daily RSI, which is extending higher in the overbought territory, also suggests a potential downturn. It is thus possible that bulls will retest the area around today’s intraday highs before sell-off pressure plunges prices to $2.00 or lower. 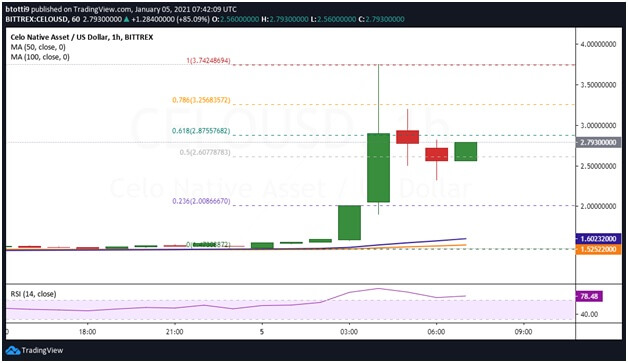 The positive divergence of the hourly RSI and the upsloping simple moving averages also supports this scenario. If sellers prove stubborn below $2.60, CELO/USD could drop to initial support levels around the 50-SMA ($1.60) and the critical 100-SMA ($1.52).

Elon Musk Not Featured in the Bitcoin Mining Council