Cardano (ADA) surged by nearly 120% this week as prices reached $0.98 level. This is the highest price level for the cryptocurrency since January 2018.

The momentum saw Cardano briefly surpass Tether (USDT) into the third spot among the largest cryptocurrencies by market cap. As of writing, ADA occupies the fourth spot,  above 5th placed XRP.

ADA is trading near $0.90, about 2% down on the day as sellers step in amid profit booking.

But even with the selling pressure, Cardano remains in a bullish mood. If bulls take the initiative going into the weekend, upward action could see the cryptocurrency’s price move towards the all-time high of $1.33—also reached in January 2018.

Cardano’s historic breakout after staying in consolidation for over two years came after a break above the upper boundary of a parallel channel. Cutting above $0.64 level, which was a critical support/resistance zone during the last bull cycle, also strengthened the uptrend as bulls rallied to $0.90 and then the $0.98 high.

Looking at the daily chart, we see the RSI is in overbought territory but not overextended, while the MACD is in the bullish zone. These are signals that bulls retain the advantage right now. 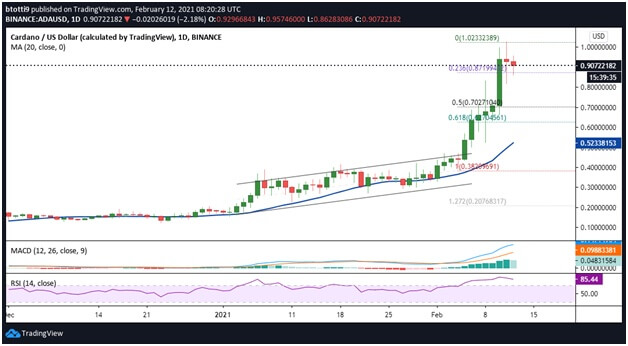 ADA/USD remains largely bullish in the short term, with the RSI above the midpoint, while the MACD suggests a hidden bullish divergence. 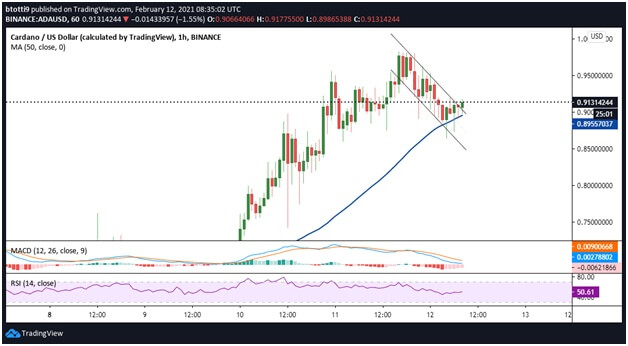 Currently, ADA/USD is above the upper boundary of a descending parallel channel formed on the hourly chart. This follows the correction to the $0.90 support zone.

The post Cardano trims gains after 120% rally near $1: What’s next for ADA price? appeared first on Coin Journal.

Coinbase proposes direct listing of its shares on the stock market

SiGMA.world expands to offer the latest gaming and tech news

SiGMA Group has announced the expansion of features on their website SiGMA.world. While still providing a portal for their major…