ADA price might rally towards $2.00 if bulls clear overhead resistance at $1.50

Cardano’s price has broken higher since stemming a major downtrend at $0.92 on 21 April. The cryptocurrency ranked 6th by market cap has seen its value increase by about 13% this past week, with an intraday surge of 8% currently placing it around $1.38 as of writing.

The ADA market is likely to see increased buying amid resurgence within the altcoin market, which is led by Ethereum’s fresh assault of price levels above $2,700.

Cardano is ready to soar on the back of major news in the form of a record partnership with the Ethiopian government. According to IOHK Media, the project targets 5 million students in what is “the world’s largest blockchain deployment.”

The news is likely to add to the bullish momentum, fueling buy-side pressure.

The ADA/USD pair is trading above a major horizontal resistance line at $1.35 as bulls seek a retest of the support line at $1.40. The upside has moved the price further off the bearish trend line that had capped movement near $1.20.

The pair is also showing positive signals as it trades above the 50 SMA and 20-day EMA on the 4-hour chart.

The breakout from the ascending triangle formation is likely to result in a retest of the 0.786 Fib level ($1.42). From here bulls can target the $1.50 supply zone, with the all-time high of $1.55 achievable if momentum helps buyers breach the barrier.

A clear breakout above the overhead resistance at $1.73 could see ADA/USD roll towards a new all-time high above $2.00. 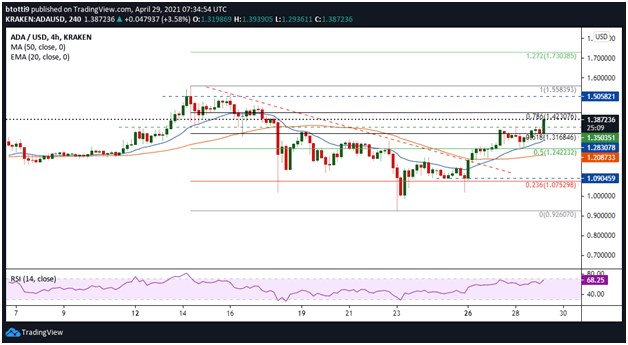 Cardano would however flip bearish if prices cross below $1.20 and the descending trend line, with support at $1.07. The key price level to watch in this case will be the psychological support at $1.00.

Coinbase proposes direct listing of its shares on the stock market