Featured – The last few years have given rise to prominent services in the payments field. More and more people are relying on online services to carry out various day-to-day payments.

It’s rather clear that banking operations, as well as the whole economics systems,  have been improved substantially within the past few years.

What is more, we can also see the serious and rapid advancement of cryptocurrencies. An increasing amount of existing banks have acknowledged the importance of Bitcoin and other emerging cryptocurrencies.

Capitual is a service which attempts to capture the prominent benefits of cryptocurrencies and combine them with traditional services needed in the field of banking.

As the White Paper puts it directly, quite a lot of the features that are offered by Capitual are already offered by other companies. However, as a contemporary financial services provider, Capitual differs because of its ease of use and because it is user-centric.

In other words, Capitual is supposedly the only company in the field which offers so many different services from within the same platform, directly to the user.

Capitual intends to become a banking service that supports cryptocurrencies and it works worldwide. It’s definitely a challenging task. Let’s have a closer look at Capitual’s services and main features.

Users are allowed to take advantage of different means of transferring amounts. They can do so through an internal transfer to another wallet in Capitual and the transfers are instant. They can also request payments by creating invoices, create bulk payments and set up recurring payments as well. 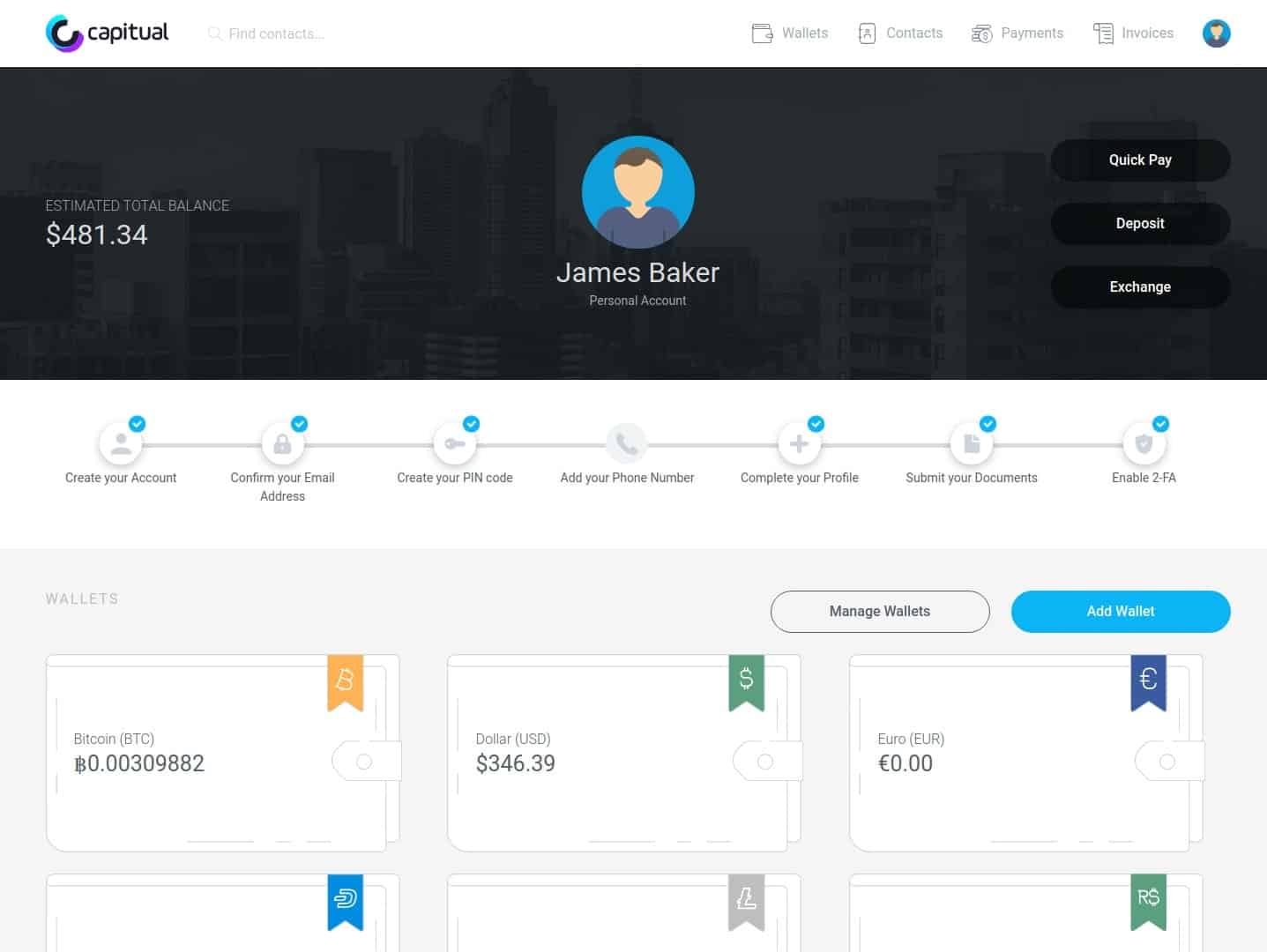 If a user is sending Bitcoin to a USD wallet, for example, the amount is automatically converted before reaching the destination wallet, hence protecting the receiver from market fluctuations.

Users are allowed to keep funds on various wallets on their accounts. There’s no limit on the number of wallets users can get.

The bank account is presented based on the currency that the user wishes to deposit. Capitual holds bank accounts in several countries where identified transfers must be sent to in order to deposit fiat.

Users can also deposit cryptocurrencies as an alternative. Since the company has made it its target to focus on cryptocurrencies, it also provides certain incentives for those who prefer to use them.

Users are able to move all or a part of their assets in a wallet to another wallet. If the wallets store different currencies, then there would be a conversion made.

CapPay allows orders which are made in e-commerce websites to be paid with Capitual funds or with cryptocurrencies thanks to the smart checkout system. What is more interesting, the user doesn’t even need to be registered in order to use the CapPay feature.

The CapToken (CPB) is based on the ERC-20 standard. Token holders also get to receive 30% of all profits made by Capitual. In other words, the more tokens you hold, the larger part of the profit you’ll receive.

In order to guarantee full transparency, Capitaul will be publishing quarterly analytics reports for its CPB token holders. These include information on the user base growth, income, funds movements statistics, as well as projections for upcoming periods.

Capitual looks like an interesting service and one that provides the user with a lot of different capabilities. It’s definitely true that the project aims to provide as many services as possible under one roof.

This is not always as beneficial as it might appear to be, but in this case, it seems to have turned out to be quite alright. Of course, it’s also worth noting that the company enters a field of tremendous competition and there are already well-established and reputable service providers that would be hard to go against.

Following five days of consolidation between the tight range of $3850 to $3950, finally, the bulls managed to gain momentum…

Binance continues to storm ahead following breaking up above the $10 mark and retesting the 2019 highs. The market has…