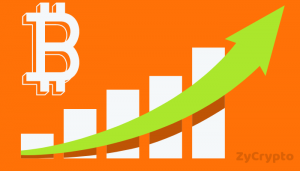 Jeffery Gundlach, founder, and CEO of DoubleLine Capital, has been a trusted financial forecaster for years. Gundlach is known as the “Bond King” and has made much of his several billion dollar fortunes by being out in front of the competition. In a recent webcast, he made some new financial forecasts and touched on the value of Bitcoin. He says 2019 is going to be a “tug of war” for the stock market, but Bitcoin has a nice surge in value in store for the near future.

Previously, Gundlach spoke negatively about Bitcoin and cryptocurrency in general. He went as far as calling Bitcoin, “the poster child for social mood and market mood,” but still thinks investors could net some short term gains. Gundlach said BTC could gain up to 25% in the coming months.

“I don’t recommend anything with bitcoin, really … but if you really want to speculate, I think it could make it to $5,000. Talk about an easy 25 percent,” he said in the webcast, even as he advised to “get the heck out of bitcoin.”

Gundlach has been warning investors in recent weeks about getting lured into “buying the dip” on high yield bonds and the tumbling stock market, advising that psychology plays a big part in how markets develop.

“People were panicking in the later part of December. They were panicking, actually, but the flow data shows they were panicking into stocks, not out of stocks. People have been so programmed, and feel so frustrated by selling when we get dips, that this time they weren’t going to be fooled. This time, they were going to buy the dip. I worry about that, though, because it reminds me a little bit about how the credit crisis developed in 2007 and 2008.”

Gundlach’s advice and wisdom are echoed by many in the cryptocurrency space. His description of “programmed” buyers is similar to the fomo buying and constant justification of “buying dips” we see in the Bitcoin and altcoin markets. While the advice comes from an outsider to the crypto scene, the parallels to the traditional financial markets are hard to ignore.

After taking a beating during the last quarter of 2018, the cryptocurrency industry is making attempts at market correction. The…

Flubit.com, a leading online marketplace has revealed it’s giving customers a 25 percent discount on all items purchased on the…