CryptoPotato is not responsible for content published on any press release

Powered by Softswiss., bitcoincasino.io is a newly launched online casino that has taken the industry by surprise. The platform initially started out as a casino that accepts Bitcoin and other cryptocurrencies, but it has recently integrated fiat currencies to offer more options to its players.

As it entered the gambling scene, the platform launched with 3000 games from over two dozen game providers. bitcoincasino.io has further expanded its library with the addition of a new game provider called Leap Gaming. 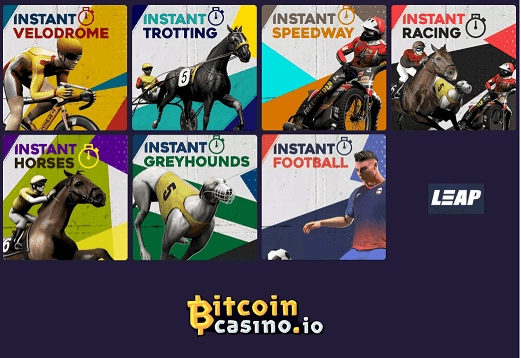 Leap Gaming is a casino game development company which was founded in 2006, and is focused on creating 3D retail, web, and mobile games. The Israeli-based business has forged long-lasting partnerships with top gaming operators in order to develop products that are above industry standards.

Leap developed a comprehensive 3D games’ generation platform that is able to produce a new class of 3D games in an agile mode. The developer has created virtual sports, casino, and casual games.

There are only a handful of Leap Gaming titles featured on bitcoincasino.io.

Leap Gaming is famous for its Virtual sports games, such as Instant Football. Other names featured on the platform are Instant Horses, Instant Greyhounds, Instant Racing, Instant Speedway, Instant Trotting, and Instant Velodrome. The games simulate bike, horse, hound, and motorcycle races, and players are able to place various types of bets on the possible outcome of the race.

Instant Football offers an on-demand football experience that has realistic animated action that emulates player movements and fast-paced betting selections. The interfaces for the games are simple and intuitive and are compatible with both desktop and mobile devices.

There are 16 teams featured, with the option to browse between games, as well as on-demand activation of games and the possibility of skipping scenes and matches so you can bet faster. Fans can also find a wide variety of betting options incorporated in the game, such as betting on home and away teams, and Rebet and Rebet*2 on the exact same teams.

The video footage featured in the games has been rendered using sophisticated motion capture technology that records the moves of professional players and scans of real stadiums for generating the audience.

bitcoincasino.io hands out rewards to its players based on how much progress they made in their games. Users that decide to cruise through the entire fortune island receive a welcome bonus for their activity.

The Most Accessible Online Casino Platform

The bitcoincasino.io interface was designed to be compatible with any laptop, tablet, desk computer, or mobile device and to run smoothly on any operating system. There is no need to waste time downloading or installing any application on your devices – if you are connected to the internet, you just sign into your bitcoincasino.io account and choose the game you want to play.

The user interface of the platform is highly intuitive, and the site’s content is organized in a clear and accessible manner. The website is so responsive and easy to operate that any new player can easily understand how to use it.

The latest security technologies were implemented in order to prevent any frauds. bitcoincasino.io also strongly recommends users to activate the 2-step authentication to enforce the security of their accounts and keep their funds safe from hackers.

bitcoincasino.io is a new online casino that puts great emphasis on security, fairness, and diversity of options.

The post Bitcoincasino.io Takes a Leap of Faith with Leap Gaming appeared first on CryptoPotato.

XRP has seen a small price rebound over the past 24 hours, marking an increase of around 3.3%. This allowed…

Bitcoin This week the price had a reversal around the $3,600 support level, which was marked on our previous market…