The world’s leading cryptocurrency touched the price level of $40,000, breaching the level for the first time

On one of the darkest days in US history, Bitcoin (BTC) has managed to maintain its incredible price rally. The cryptocurrency’s price shot up even as thousands of rioters raided the Capitol building.

BTC has once again set a new all-time high barely 24 hours after smashing its previous record high. According to TradingView, the digital asset hit $40k at around 18:13 UTC yesterday and transcended to a high of $40,374 less than five minutes later. It has also doubled its historic high of $20,000 posted during the 2017 crypto market boom.

However, the breach into the $40,000 level was short-lived as BTC saw a pullback resulting in a sharp dip to around $37,500. The quick retracement has primarily been attributed to substantial selling pressure at that critical psychological level. As of writing, Bitcoin is trading at $39,712—having climbed 9.67% in the last 24 hours. The asset’s year-to-date gain is currently approaching 36%.

It is worth noting that the crypto asset is closing in on Facebook and Tesla in terms of market capitalisation. The automotive and energy company has a market capital just north of $773 billion, as per AssetDash. Facebook, on the other hand, is crossing $766 billion.

Meanwhile, Bitcoin is gaining ground and advancing into the $738 billion region. Facebook and Tesla took 16 and 17 years, respectively, to reach a $730 billion market cap, whereas Bitcoin has reached the same milestone in 12 years. 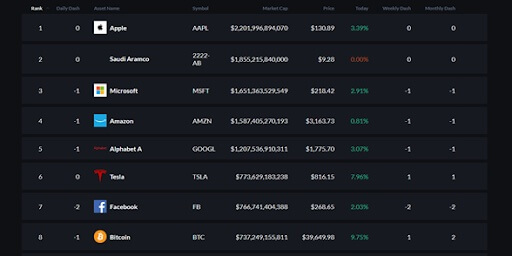 Industry experts have often drawn comparisons between Tesla and BTC. Some have even gone ahead to declare Bitcoin as the superior asset.

However, the EV-manufacturer stock had a better run in 2020 than Bitcoin in terms of yearly gains last year. Tesla’s stock wrapped up the year with an upswing of over 700%, whereas BTC managed a 300% jump. Even so, the crypto asset has maintained its uptrend since the start of the year.

Despite the recent market crash, Cardano has gone from strength to strength over the last 24 hours. As the market…

Criminals don’t use Bitcoin to launder due its transparency

Transactions in the Bitcoin network are transparent, making the cryptocurrency a poor choice to launder money, according to former CIA…