Bitcoin (BTC) corrected to lows of $21,864 before aggressive buy-the-dip action pushed back the currency to $22,800 level

Bitcoin bears pushed prices to lows of $21,864 before investors aggressively bought the dip for a daily candle close at $22,800.

But while the uptrend to overhead resistance around $24,000 is very much likely, another sharp correction such as the one witnessed yesterday could be on the cards. The outlook is down to the impending volatility likely as a result of Friday’s expiry of 102,000 BTC options contracts.

According to digital asset trading platform QCP Capital, this week’s Christmas expiry is the largest ever Bitcoin options open interest (OI). As per the firm, the large OI and Bitcoin’s surge to new all-time highs means the $19k—$20k zone “could act as a magnet for spot”.

If fresh institutional money makes its way into the crypto space, it could be critical to keeping prices above $20k. Otherwise, BTC/USD could sink to the 50-SMA price line ($18,335). 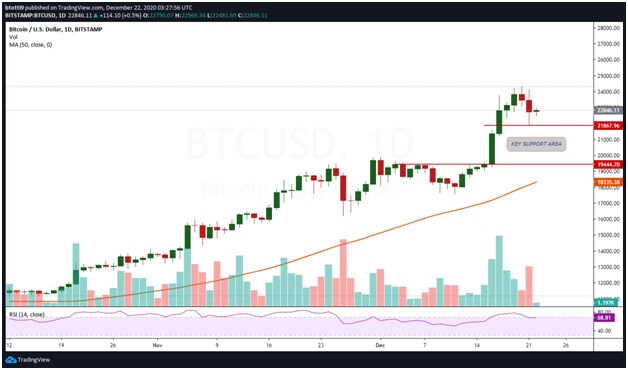 As seen on the 1-day chart, the sharp decline to lows of $21,900 follows various failures at cracking resistance near the psychological barrier. The long tail on the daily candlestick, however, shows that bulls were quick to buy the dip.

The Relative Strength Index (RSI) indicator has moved from its extended position in the overbought region and is hugging the green line. This suggests that bulls have room for another leg up.

Bulls will likely target an uptick in buy-side pressure and drive the BTC/USD pair towards $25-$26k. 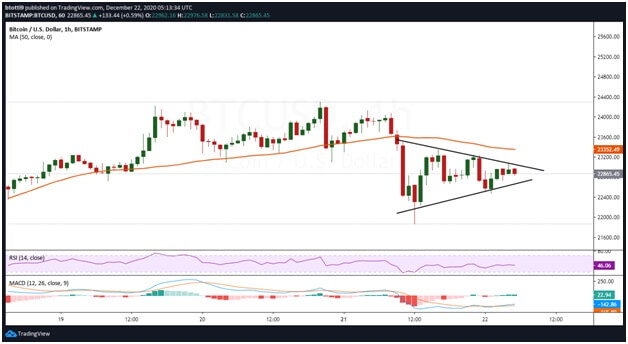 On the hourly chart, BTC/USD is below the 100 hourly SMA and is trading inside a contracting triangle pattern.

The MACD is suggesting a bullish move but is struggling while the hourly RSI has crossed below 50 to indicate that bulls might have to fight to keep prices above $22,800.

The post Bitcoin recovers from lows of $21,864 but faces volatility appeared first on Coin Journal.

Public support needed to launch a CBDC in Japan

According to an official from the Bank of Japan, the central bank won’t be able to launch a CBDC without…

FNK has seen a price rise of over 320% in the last seven days alone as buyers have swooped in.…