Bitcoin was trading as high as $19,484 on November 25 before the massive market crash. The digital asset lost around 17% of its value in one of the ‘smallest’ pullbacks in its history of bull rallies.

While many new investors panicked, others are setting up their orders to ‘buy the dip’. So far, Bitcoin price hit $16,188 and it’s currently under a small bounce at $16,744 but traded as high as $17,457 earlier during the day.

In the medium-term, the most important indicator is the 26-EMA, which hasn’t been lost yet on the daily chart. As discussed in our previous article, losing this exponential moving average would be a notable shift in favor of the bears.

On the other hand, a bounce above the 12-EMA would invalidate any bearish outlooks with Bitcoin aiming for the 2020-high and the all-time high again.

The most critical timeframes during this correction are the lower ones. On the 30-minutes chart, the price of Bitcoin has established a symmetrical triangle pattern which is extremely close to a breakout. 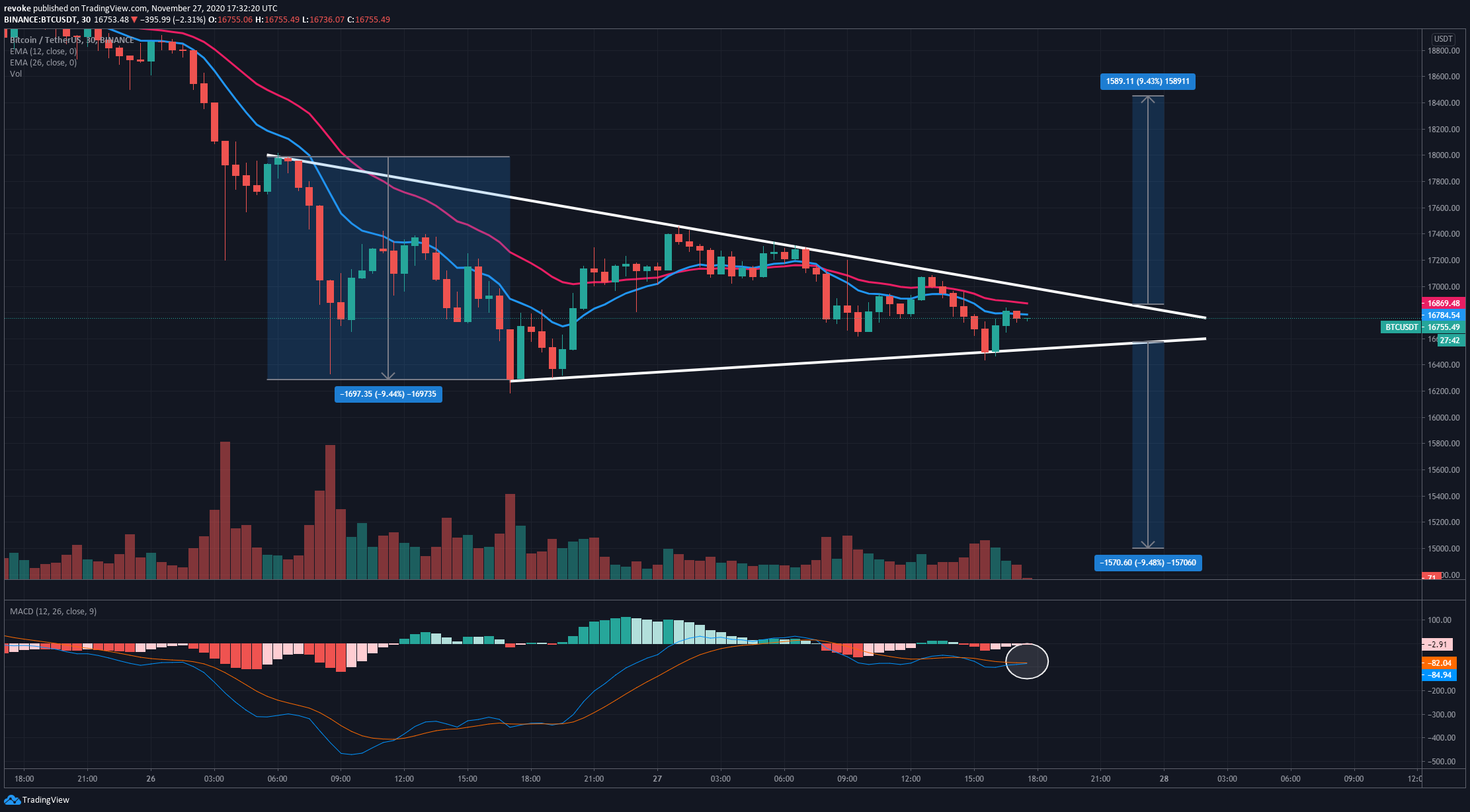 The MACD which is on the verge of turning bullish indicates that buyers are a bit stronger currently. A breakout above or below the pattern would lead Bitcoin into a 9% move. Bulls need to climb above the 12-EMA and the 26-EMA before a breakout towards $18,500.

Similarly, bears need to keep Bitcoin’s price below both EMAs. Traders also need to remain cautious as BTC is prone to fakeouts when the volatility is high.

According to the most recent report by Santiment, there has been a significant surge of Stablecoins to exchanges in the past 24 hours. This is widely considered a bullish indicator as it is assumed that most of them will be used to purchase cryptocurrencies.

According to the statistics, around $721 million USDT was deposited in all exchanges in the past 24 hours, which is a monthly high. Similarly, USDC, DAI, TUSD, and BUSD posted monthly highs.

In fact, close to $86 million BUSD were moved to exchanges, which is the second-largest single-day exchange inflow.

In a word, a lot of stablecoin has been moving to known exchange wallets over the past 24 hours. Given the recent price action, the forming pattern could suggest renewed interest in exchanging assets like USDT and USDC for more volatile cryptocurrencies and buying into the market-wide dip.

We will continue to monitor Bitcoin’s activity over the next 48 hours to better understand where it’s headed.

Top 3 Reasons why BITCOIN is about to BOOM

For an extended period of time, Bitcoin managed to remain at its consolidation level. This sideways area is delimited by…

The global payment technology company Visa to offer Bitcoin, Ethereum, and Ripple payments. The payment giant has revealed that it has been…