Bitcoin is looking to retest resistance at highs of $19,442 as bulls scheme for a final leg towards a new all-time high

Bitcoin (BTC) has been truly unstoppable these past few weeks. As seen on the chart below, the bellwether cryptocurrency has rallied to new highs after a new high in 2020. Yesterday, bulls pushed BTC to $19,442 before retreating to seemingly re-energise for another uptrend.

The next few sessions could be where BTC price finally breaks above its all-time high of $20,000. 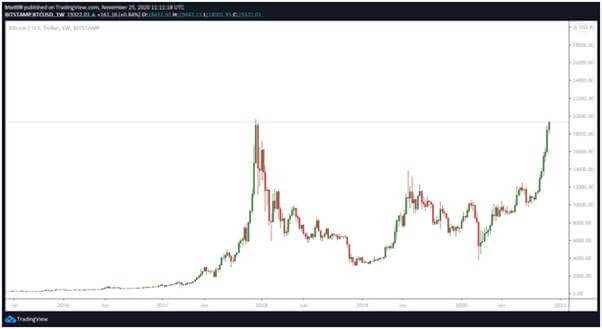 At the time of writing, BTC is trading around $19,357 having posted an intraday high of $19,365. Although the price dipped to $18,640 during the early Asian trading session, it crucially remained above the middle point of an ascending channel that has been in place since early mid-October.

But then again, it’s worth noting that the current momentum could be stalled again. If that happens, another flip to the upper half of $18,000—$19,000 could materialise.

This scenario is likely given the RSI on the daily chart is flat-lining and might cut lower. However, it currently remains well within the overbought territory; to suggest there is still plenty of buy-side pressure that could propel bulls to the moon.

To achieve this, bulls need to hold near or just above $19,000. The next target is to rally past the $19.4K high and retest the upper boundary of the ascending channel. 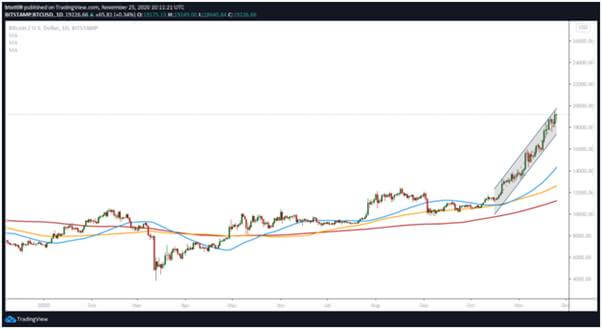 Also positive for bulls is that BTC/USD has traded above all simple moving averages since 10 October. Staying above the 50-SMA is especially highlighted as a bullish signal.

Furthermore, the shorter-term moving average is cutting above both the 100 and 200 SMAs to indicate bulls are still hungry for more.

But traders should expect a pullback or so before BTC/USD hits the coveted target. According to crypto trader and technical analyst Josh Rager, the retreat would be nothing but a normal market trend.

“Even the most bullish asset in history has a pullback on occasion”, he noted on Twitter after Bitcoin corrected to lows of $18,640. 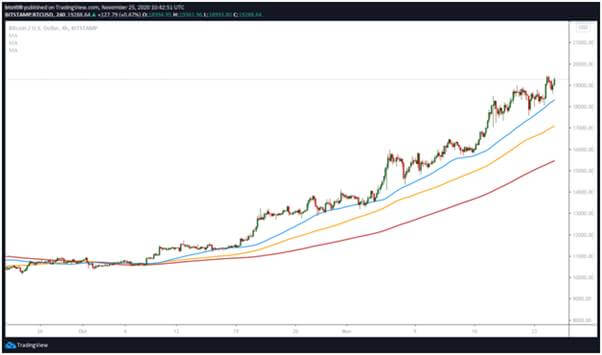 The post Bitcoin on the threshold of price discovery above $20,000 appeared first on Coin Journal.

Ethermine to distribute the mystery $2.6 million transaction fees to miners

The unusual transactions might be the result of blackmail, says Primitive Ventures founder Ethermine, one of the mining pools that…