Weekly recap for Bitcoin and Ethereum price analysis, with a look at the decline of Gold and Silver

Both Bitcoin and Ethereum have seen their prices grow over the past seven days, according to data from CEX.IO. Of course, alongside surges, there were also corrections that took the coins down after each new step up. This is particularly noticeable when it comes to Ether which, at one point, dropped by $100 over the course of just a few hours.

Bitcoin was nicknamed ‘digital Gold’ years ago, and ever since, investors and analysts have always compared it to Gold in terms of value, market cap, use cases, ease of management, and seemingly in anyway possible. Many were predicting that BTC will eventually replace gold, although no one knew when that might be expected.

During the year of COVID-19, BTC and Gold have become go-to assets, with investors typically choosing one or the other. However, recent developments indicate that BTC seems to be winning the fight against gold, at least as far as media coverage is concerned.

Less than 10 days ago, for example, billionaire investor Mark Cuban — who once said that he preferred bananas over cryptocurrency — told Gold investor Peter Schiff that “Gold is dead”, and it is time to move on. A crypto skeptic finally started seeing utility in Bitcoin, calling it better than gold.

Schiff’s own son, Spencer, recently sold his Silver stocks in order to invest in Bitcoin, which now makes 100% of his investment portfolio, according to Schiff’s recent tweets. While this caused quite a bit of criticism from Spencer Schiff’s father, the crypto community welcomed the move.

Bitcoin has seen a lot of other activities recently, such as rising institutional interest reported by Goldman Sachs, the launch of its third ETF in North America — once again in Canada, but this time by Mike Novogratz’s Galaxy Digital — while JPMorgan, an institution that has been criticising Bitcoin for years, finally gave in and decided to launch a Bitcoin exposure basket, thus providing a new gateway into crypto for its clients.

Ethereum has seen a lot of development also, with the DeFi sector continuing to grow and develop, and the recent rise of NFTs, which appear to be a new dominant trend, and could even become the main trend of 2021. However, scalability issues and high gas prices continue to stand in the way, which is likely to remain the case until Ethereum 2.0 completes its launch.

Still, while expensive and slow, Ethereum continues to play an extremely large role in the blockchain industry, even though its price is still struggling to grow.

According to CEX.IO charts, Bitcoin price has been advancing over the past week with an occasional correction, but the surge eventually took the coin up to $58,174 on 11 March. Since then, BTC corrected a bit, but it remained in high $57,000s, currently sitting at $57,629. 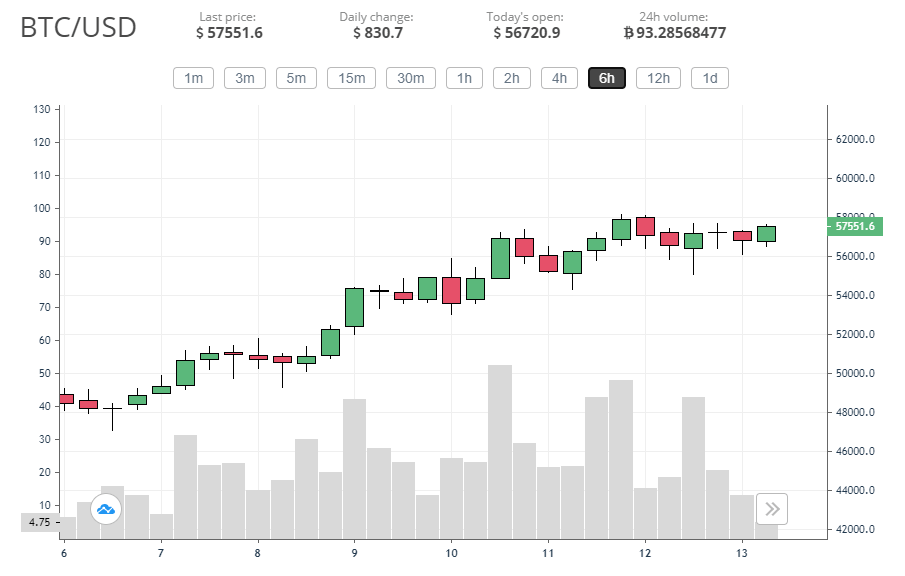 Bitcoin has nearly returned to its all-time high, with many believing that it is only a matter of time before it pushes towards $60k. Of course, with all the positive news and institutional interest fueling its growth, this is hardly surprising. Still, the $60k mark is more than just another milestone — it is also a big psychological barrier, and while BTC has broken a lot of those recently — each new one will likely be treated with the same apprehension.

One thing that is noticeable is a drop in the coin’s trading volume over the past two weeks, while the price has clearly been rising at the same time.

As for Ether, the coin saw growth over the first half of the past week until it reached $1,850. After that, its price faced a rejection, and the same happened whenever it attempted to return to this level and go beyond it. ETH has seen some severe rejections, a few times even down to $1,700. While BTC is clearly surging and is now close to reaching its ATH, Ethereum seems to be held back by a strong resistance, which might become a powerful support if the coin manages to break it before it loses momentum. 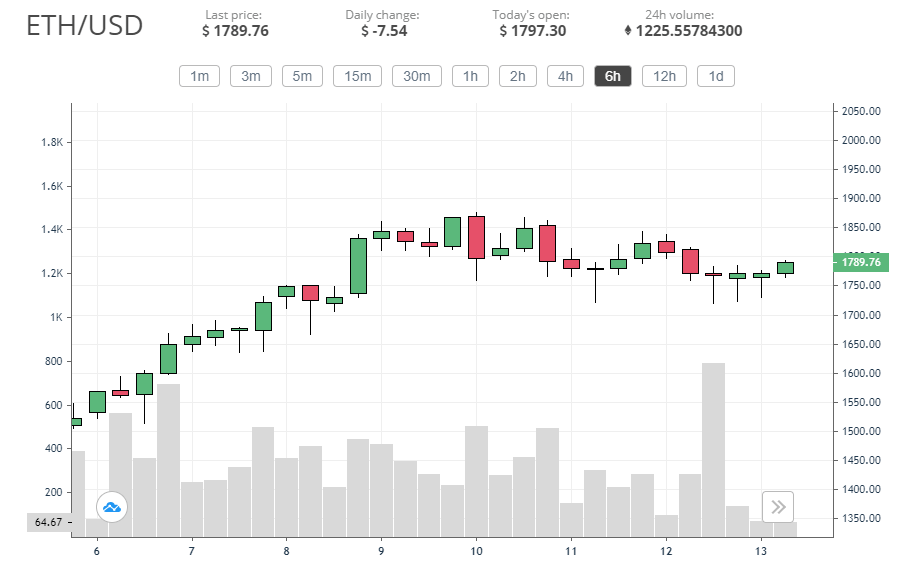 If this happens, ETH could have a solid base for launching a next rally that could take it to the old ATH, and potentially even a new one.