Bitcoin’s price needs to hold above $13,600 to prevent a bearish breakout

Bitcoin (BTC) bulls need to hold onto the support area around $13,600 if they are to keep bears at bay and repeat their recent push for a break above $14,000. Bitcoin’s resilience above $13,000 has so far helped keep sellers off this week, even as the cryptocurrency largely outperformed major altcoins and the stock market.

Yet, with the US President Donald Trump declaring victory even as vote counting continues, BTC price has corrected heavily.

The technical picture suggests that the BTC/USD pair is likely to swing lower again if bears succeed in taking it to a close below the critical support level around $13,600.

On the other hand, yesterday’s break to $14,064 remains important as another breakout will likely invite fresh buying pressure and send Bitcoin prices up again.

As seen in the chart below, the BTC/USD price has traded in a series of higher lows and lower highs since yesterday’s uptick. 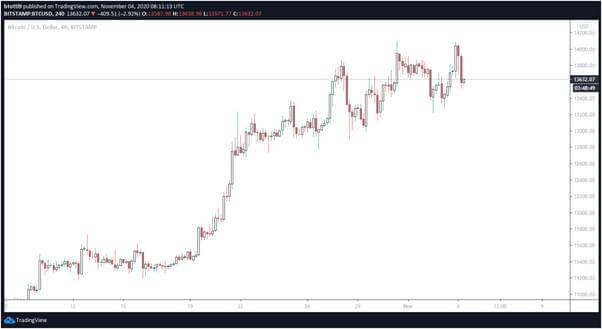 According to on – chain data firm Santiment, Bitcoin’s rally to highs above $14K came despite a record 16-month spike in exchange inflow., traders need to closely watch the space as things might quickly change as the US election results roll in.

The post Bitcoin corrects sharply as markets react to the US election appeared first on Coin Journal.

TRON’s platform is powered by the TRX cryptocurrency, investing in which allows crypto users to be part of the TRON…