Bitcoin (BTC) hash rate sees 155.4 EH/s even as Bitcoin trades below a declining trendline that could see prices fall below $35k

Bitcoin has touched highs of $36,070 in intraday action today, yet bulls’ failure to sustain momentum towards the hourly 100-SMA could see BTC/USD strengthen a short-term bearish outlook.

This is likely given the zone around today’s intraday highs presents a major resistance line that has capped price action since 14 January.

Bitcoin has been trading lower over the past four days, with yesterday’s decline seeing prices restricted below $36,800. Today’s upward action follows a similarly strong rebound last week, which had seen BTC recover from a dip to $32,327. But the upside to highs of $40,110 was quickly followed by another dip, with price touching lows of $33,800 over the weekend.

As shown on the hourly chart, failure to break and rally above $36,000 in the coming sessions could strengthen a short term bearish outlook.

The negative perspective is highlighted by the hourly RSI and a declining trendline that is currently restricting bulls around the 76.8% Fibonacci retracement level of the move from $33,830 low to $36,849 high. This level presents a resistance line at $36,212. 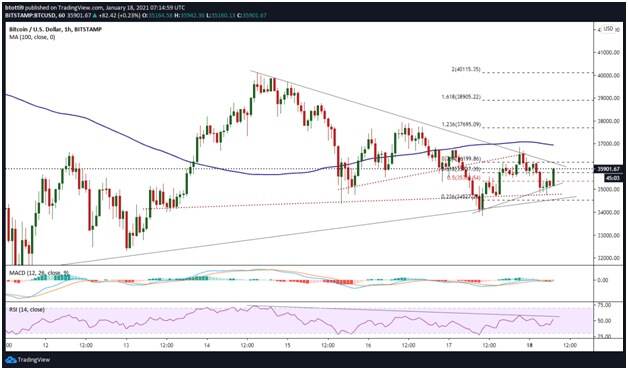 BTC price could well dip below $35,000, and move towards a potential retest of $30k, with long term losses likely to target the $20k region. But on the upside, BTC/USD is likely to surge to new record highs as its fundamental and technical picture strengthens.

One of the metrics suggesting Bitcoin’s future price might surge beyond its 2020 all-time high is the surging hash rate. At the time of writing, the total computing power on the Bitcoin network has surged to a 7-day moving average high of 155.4 EH/s, the highest it has ever been. 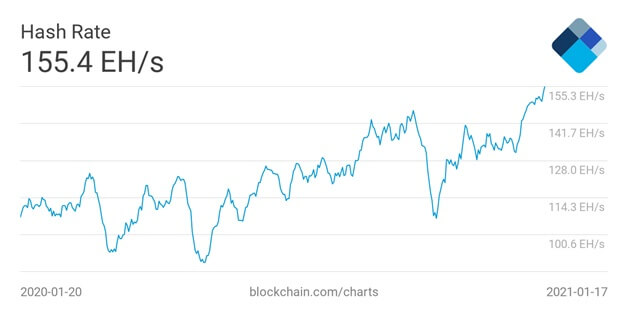 Hash rate has reached a new ATH even as Miners’ Rolling Inventory (MRI) over the past week has dropped to 98%, compared to an average of 144% over the past 5 weeks.

The MRI tracks how much miners sell compared to what they generate, and a decline suggests that miners are positive about the future prices of Bitcoin. It’s therefore likely miners are targeting prices much higher than the ATH before they start selling aggressively again.

A Twitter survey by Bitcoin sceptic Peter Schiff indicates that around 60% of 24,500 respondents will not sell their Bitcoin…