BTC price has stalled below $57k as ETH steals the show with a massive rally above $3,000

Bitcoin price continues to struggle below resistance around $57k, with the world’s largest cryptocurrency by market cap outpaced by Ethereum. While the latter has surged by over 30% this past week to reach a historic $3,457 price level, BTC has retreated 3.3% and currently looks set to dip below $56,000.

According to the analysts, the pullback and sideways action will end with another major rally that could take BTC above its current all-time high near $65k.

The highly respected Michael Van de Poppe recently revealed in a video analysis that several signals suggested a new rally for Bitcoin within this market cycle. According to the analyst, the continued inflow of institutional money and widespread adoption portend massive demand that might catapult BTC’s price beyond the $100k level.

Another analyst, the pseudonymous Plan B, also notes that Bitcoin could flip towards $100k given a bullish signal on the cross-asset stock-to-flow (X) model. Per the analyst, the appearance of a “new dot” on the chart is slightly lower than the preceding six months. This setup hints at a potential uptrend that could see BTC prices flip higher over the coming months.

Bitcoin has traded lower since running into overhead resistance around $58,870 as shown on the 4-hour chart below. The BTC/USD pair is trying to bounce off support at the 50 SMA ($55,659) after touching lows of $54,653 in early morning deals on 4 May.

The rebound off the intraday low happened at the support line of an ascending channel that has been in place since the dip below $50k. 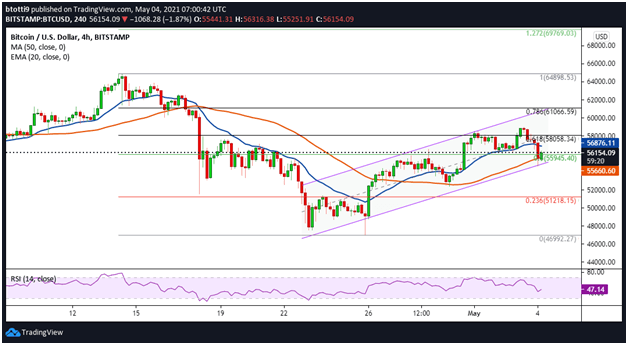 If bulls retake control, BTC/USD will refresh gains inside the channel. However, another leg down will likely plunge prices towards the 0.236 Fib level ($52,218) and the critical $50k.

Police in Malaysia are alleged to have destroyed over 1,000 mining machines at the end of last week In a…