May was a tough month for the cryptocurrency market, with 2021’s historic rally seemingly running out of steam. However, interest in digital assets remains high, and the “bloodbath” market of last month has given investors the opportunity to scoop up some cheap coins. We’ve taken the time to round up the five best cryptocurrencies to buy in June 2021 to help you capitalise on a potential recovery and resumption of the bull run.

Cardano (ADA) rallied by 10% this weekend as many other altcoins languished, with speculators attributing the surge to strong fundamentals and some exciting features being realised on the blockchain. IOHK, the company behind ADA, recently announced its plans to roll out the “Alonzo” hard fork.

ADA overtook $USDT by the number of users in April!

The fork will allow for smart contract functionality on the Cardano blockchain — perhaps the most eagerly anticipated upgrade to date. Supporters of the project will argue that ADA can now fully compete with tokens like Ethereum (ETH) and Binance Smart Chain (BNB), where smart contracts have enabled decentralised finance (DeFi) to grow at an astonishing pace over the last year.

If the update goes to plan, there is a serious possibility that Cardano could unseat Ethereum and become the leader in the smart contract space. ADA’s blockchain is arguably more efficient, and the coin has an army of loyal supporters and developers. If you buy ADA now, you could see a huge potential return this summer if the upgrades go to plan.

Ethereum, the second-largest cryptocurrency by market cap, is another candidate for the best cryptocurrency to buy in June 2021. Expert analysts believe that Ethereum’s advanced functionality, as well as the hype surrounding non-fungible tokens (NFTs) and DeFi, could help it overtake Bitcoin to become the top dog in the crypto sector. Another huge potential driver is an upgrade called EIP-1559.

EIP-1559 is an update scheduled to go live in July, which has many investors extremely excited. The upgrade will cause transaction fees to be “burned” instead of being awarded to miners. This will, in theory, cause the supply of Ethereum to shrink over time. This will be hugely attractive to Bitcoin investors, who are largely drawn in by the currency’s limited supply.

According to the fundamental laws of economics, if the supply of ETH goes down while the demand remains high, then the price will rise accordingly. It doesn’t take a rocket scientist to see huge potential for profits here.

Ripple (XRP) is showing a very positive outlook for June, as it appears to be gaining the upper hand in its long battle with American regulators. The Securities and Exchange Commission (SEC) was recently denied access to private documentation pertaining to Ripple Labs’ legal status, marking another win for XRP in the $1.3 billion lawsuit.

SEC motion denied. This is great for #XRP pic.twitter.com/TBFz49r0GR

This was followed last week by news that Ripple Labs plans to go public. Brad Garlinghouse, the CEO, did not offer a specific time frame for the IPO, but the announcement alone has already generated a huge amount of hype. Ripple would be the second major company in the crypto space to go public after Coinbase’s highly successful public offering earlier this year.

This makes XRP potentially suited to the “buy the rumour, sell the news” technique. Analysts predict that confirmation of an IPO would send the price of the XRP token through the roof, so shrewd investors may want to get in now before the masses realise the profit potential here.

The Polygon Network has seen a host of bullish developments over the past few weeks, and this looks set to translate into price action for this summer as well. Polygon’s token, MATIC, is up by over 9,000% in 2021, and the coin is tipped by many to be one of the next generation of huge gainers in the crypto space. MATIC was an anomaly last month in that it maintained a bullish trend while the rest of the crypto market endured a massacre. 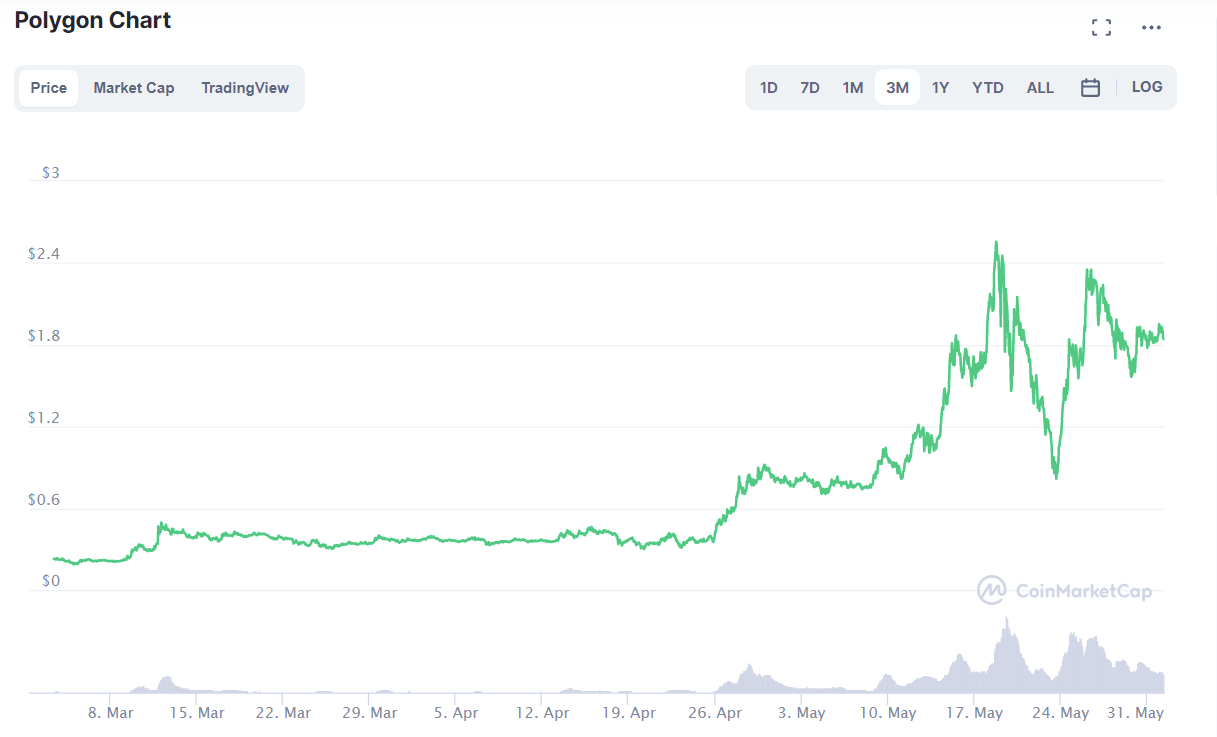 Last week, billionaire investor and owner of the Dalla Mavericks, Mark Cuban, announced that he had invested in the company. A huge supporter of NFTs, the wildly successful Cuban believes that Polygon will be a central player in the development of crypto’s Layer 2 ecosystem. Polygon is still an extremely young project, so investors looking for the best cryptocurrency to buy in June should certainly consider investing in the “next Ethereum”.

After the widely-publicised Bitcoin slump of last month, with negative comments from Tesla CEO Elon Musk causing alarm amongst retail investors, some readers may be surprised to see BTC on this list. However, rather than the beginnings of a bear market, investors may be looking at the final opportunity to buy Bitcoin for under $40,000. This is largely due to the upcoming Taproot upgrade.

According to projections, the Taproot upgrade should be locked in as soon as 10 June, meaning that investors have just a few days to invest if they want to beat the crowds by acting quickly on the news. Additionally, the SEC is now officially reviewing two Bitcoin exchange-traded funds (ETF) for the US market. Macro investor Raoul Pal believes that an ETF approval will be “rocket fuel” for this Bitcoin bull run.

Where to buy cryptocurrency in June 2021

eToro is arguably the most recognisable online broker out there, and is one of our top picks for buying cryptocurrency. With over 13 million customers and a huge range of coins to trade, eToro is one of the safest bets for both new traders and veterans alike.

Coin Kong is one of our most trusted partners for non-US users. With hundreds of coins available, from the big names such as Bitcoin and Ethereum to the more obscure tokens, Coin Kong allows you to start your cryptocurrency investment journey after a simple sign up process.

The post Best cryptocurrencies to buy in June 2021 appeared first on Coin Journal.

The finance minister of Zimbabwe discussed at length the benefits of cryptocurrencies in the payment’s sector Mthuli Ncube, Zimbabwe’s Finance…

XRP climbed to $0.2425 to hit a monthly high as bulls established control with a 10% upside Ripple’s price has…