Back in 2018, the DomRaider team set out to revolutionize the world of auctions through the use of the latest blockchain technologies.

To date, the Auctionity project is the only platform of its kind to offer the possibility to bid at English (ascending) auctions that are not only fully decentralized but also reliable thanks to smart contracts.

Auctionity also makes online auctions more engaging for bidders via a viral reward mechanism which encourages community members to participate in the sales promotion of the auction.

With this taking the form of simply sharing the link to social networks, the true nature of the system comes in the form of an interactive and real-time live streamed video link of the ‘saleroom’ – watch the bids increase with our interactive auctioneers!

The Auctionity platform currently specializes in auctions for collectible digital assets known as NFT’s or Non-Fungible Tokens. However, this is but a first step and a springboard towards a much wider set of applications of decentralized English auctions.

According to Tristan Colombet – CEO of DomRaider;

“Soon, it will be possible to easily sell a tokenized item (i.e. made unique and identifiable on blockchain) on the Auctionity platform. Auctionity also makes online auctions more spectacular and viral via a reward mechanism which encourages community members to participate in the sales promotion of an auction” 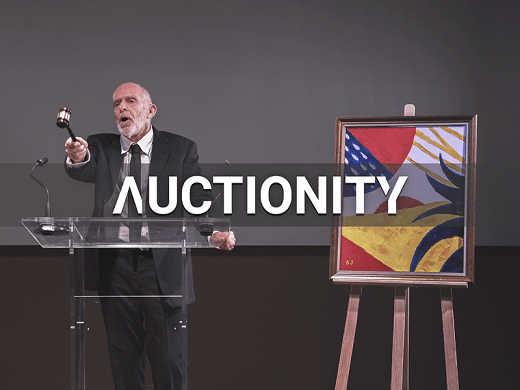 Auctionity’s goal is to break the codes of traditional auctions by opening the way to a new generation of sales where buyers bid seamlessly in FIAT or cryptocurrency and directly via their smartphones, laptops or devices.

To keep up with the latest technical advances, the Auctionity team conducted a full rework of the platform – the new interface places live-streamed auctioneers at the forefront. The project is also gaining traction thanks to our premier partnerships including the Non-Fungible Alliance (created by Oxcert)) which aims to create a fertile ground for the NFT adoption.

Other partnerships include exclusive NFT sales such as the one organized with Etheremon for the Chinese New Year or the Creative Challenge launched in collaboration with the art platformKnownOrigin.

The development of Auctionity also happens through international events such as the NFT.NYC during which the Playstation Theater in Time Square was illuminated with Auctionity’s colors.

Auctionity is building solid foundations to foster its development in the near future. The video recently released thus forecasts great innovations and evolutions in terms of new usages in the world of auctions and NFTs.

The post Auctionity Changes the Face of the Global Auction Industry appeared first on CryptoPotato.

Definitive Guide on What Are Synthetic Assets

Synthetic assets are always considered as a switch in conventional economic markets. Presently, as the business world is evolving and is…

After two years of dedicated work and development, the team of financial experts and engineers at SwissBorg, have produced a…