Uniswap has a new proposal pending to help users that have interacted with the exchange through a proxy or third-party to get their UNI airdrop. The proposal has already 37.5 million votes in favor and only needs to reach 40 million to pass. There are only 1.2 million votes against it.

It certainly seems that the proposal will most likely pass, which means that 12,619 will potentially claim 400 UNI each. There are only a handful of projects that are supported starting with Argent, DeFi Saver, Dharma, eidoo, FURUCOMBO, MEW, Monolith, Nuo, Opyn and rebalance.

If you have used any of these projects before, you could have the chance to claim 400 UNI tokens for free. More than 5,000,000 UNI tokens will be potentially distributed across accounts. This represents around $12 million at current prices.

The first and only airdrop so far happened on September 17, the price of UNI surprisingly had a significant rally from $2 to a peak of $8.6. However, the rally was short-lived due to the massive selling pressure from the airdrop. 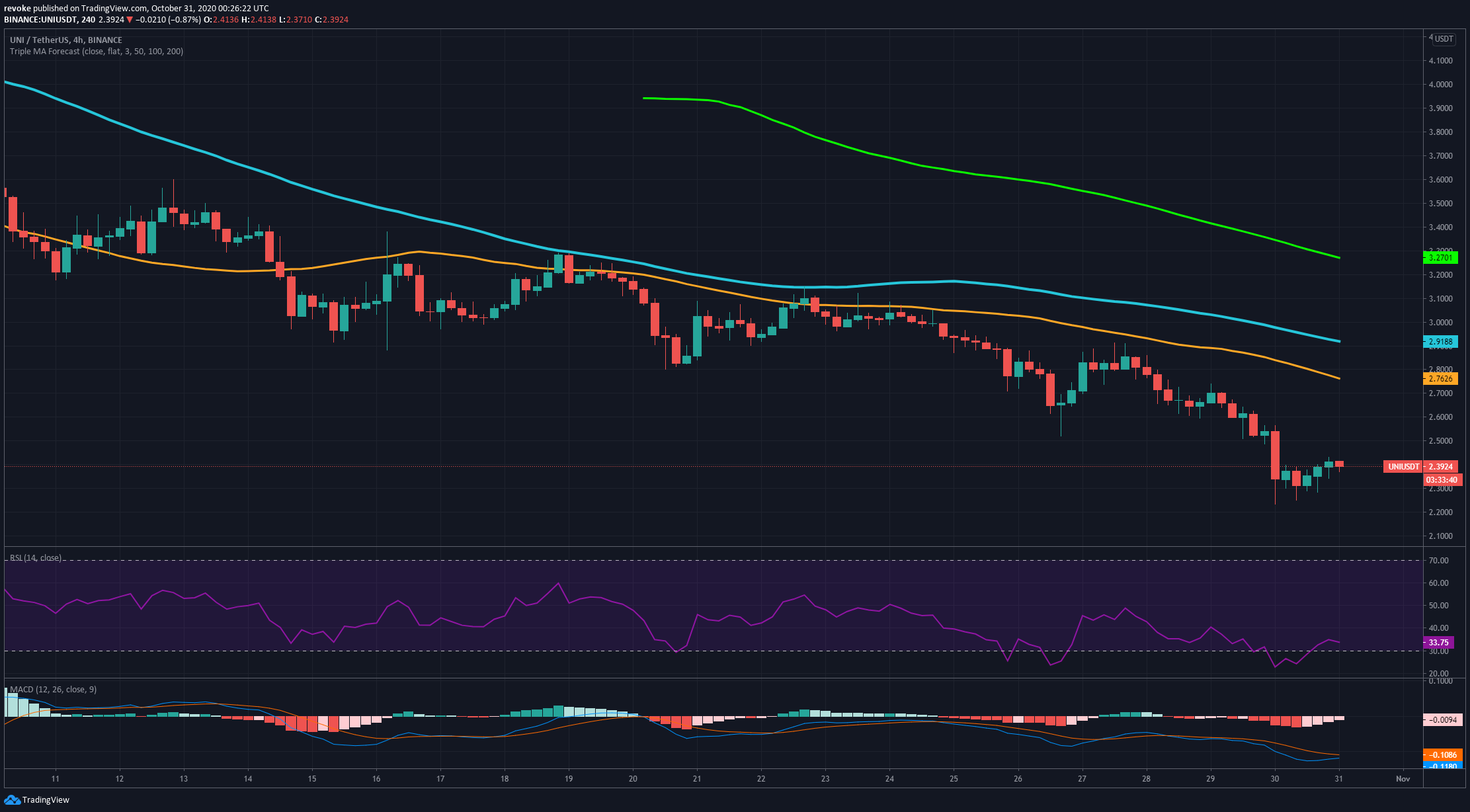 The price of UNI has been in a downtrend ever since, hitting lower lows almost every day. Clearly, another airdrop, although smaller, will have a negative impact on the price of UNI.

The current price is trying to stabilize at $2.4; however, there are no clear support levels on the way down. The RSI has been overextended several times in the past and although UNI did rebound briefly, it never got any real bullish continuation. The MACD on the other hand is on the verge of a bull cross which could help out in the short-term.

Nonetheless, considering the incoming selling pressure, it will be hard for UNI to remain above $2. Looking at the IOMAP chart, the strongest resistance area seems to be between $2.54 and $2.56, and the next most significant range at $2.66-2.69. It seems that a breakout above $2.56 could push the digital asset towards $2.69.

It also seems that the number of new addresses joining the Uniswap network is decreasing significantly in the past 7 days, being down 42%. Similarly, active addresses are decreasing by 27% in the past week. This shows a lack of interest in Uniswap, despite the strong correction.

Lack of buying pressure in conjunction with the upcoming selling pressure will most likely push UNI towards the psychological level at $2 in the short-term.

The Ethereum price fell from $490 back to $340, and as of now is roaming around the golden ratio. Can…

The social media platform Twitter had a major security breach on Jul 15, at around 2:16 PM ET, an event…