Altcoins could be marching towards a bull run as Bitcoin (BTC) looks to stabilise above $30,000. The bullish outlook for altcoins is likely given most of the top 20 alts remain grounded, even after Bitcoin’s recent dumps.

Ethereum (ETH) has, for instance, bounced above $1,000 and could target a new all-time high (ATH) well above the previous ATH of $1,432. Ripple (XRP) on the other hand continues to hold near $0.30 after struggling through a period of intense sell-off pressure. Elsewhere, major alts like Stellar (XLM), Cardano (ADA) and Litecoin (LTC) are all looking strong.

Among the DeFi tokens, Synthetix (SYN), Aave (AAVE), Maker (MKR) and Compound (COMP) have surged double-digits in the past 24 hours on strong upward volumes.

As altcoins prepare for a major bull run, BTC dominance is shrinking after hitting resistance. The weekly RSI as well as MACD suggest a bearish divergence. If Bitcoin price goes sideways, pumping the alts might push the altcoin market cap to highs of $550 billion.

According to crypto analyst Michael van de Poppe, the bounce will happen if the market cap holds the main support level near $200 billion.

“The altcoin market capitalisation is looking super bright here. Currently, we should be resting on the $200 billion areas for support. As long as that holds, the next altcoin run will bring the market towards $440 and $550 billion.”

The main resistance is at the 161.8% Fibonacci retracement level of the previous move from $120 billion low to $362 billion high. That hurdle is around $319 billion, a pivotal level if alts have to maintain the upside action.

An impulse wave from these positions could see the altcoin index jump to the 261.8% Fib level around $439 billion.

Apart from the coins we highlighted above, another one to watch is ICON (ICX). According to the analyst: “Icon is still looking great here as it’s been making higher highs and higher lows. The critical support at $0.30/0.35 held and therefore continuation is likely to be expected. New impulse wave targets are $1—1.20 and $1.60—1.80, probably during the upcoming alt season“. 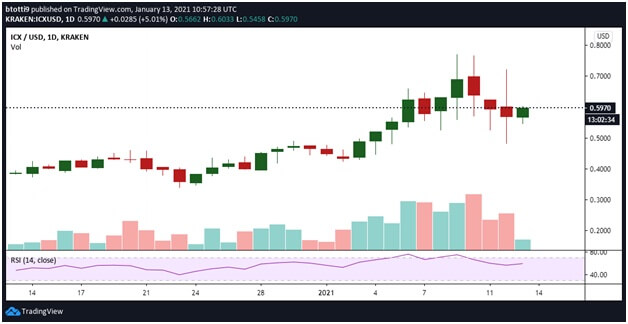 The volatility in the crypto market pushes Coinbase’s trading volume up by over 1,500% from Q2 of 2020 United States-based…

ChainLink touched a high of $4.94 on Monday, its 11% upsurge seeing it come close to hitting a new all-time…